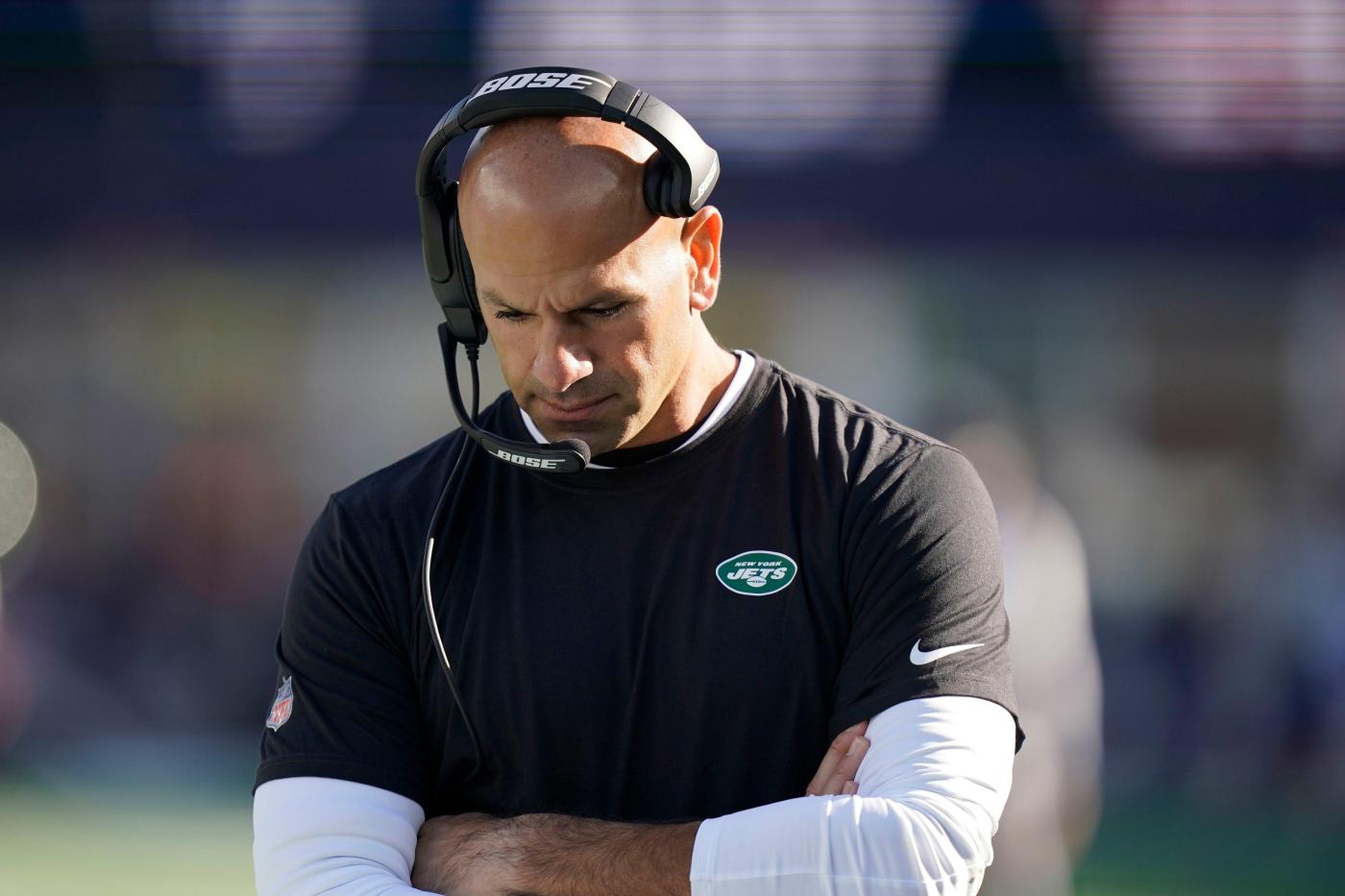 Robert Saleh has not panicked with the media. Still, the Jets head coach has revealed his sensitive side. He let you see him sweat. That’s not a good thing.

When he responded to Rex Ryan, one of ESPN’s paid professional agitators, Saleh showed that he may not have the guts or deceit required to control Crazy Train, which is the New York Jets. Saleh did not like Ryan, the former Jets coach who turned his criticism of Gang Green into a personal attack during an interview on ESPN-98.7.

“Never compare this Robert Saleh guy to me,” a disgusted Ryan told 98.7′s Rick DiPietro and Dave Rothenberg. Ryan then delivered the ultimate insult, saying Saleh’s Jets do not “want to play with any damn heart.”

Later that Monday on 98.7’s “The Michael Kay Show,” Saleh decided it was a fair idea to shoot Ryan back. He said he had “never” met Ryan or talked to him. “I do not even know him, except that people know him throughout the league,” Saleh said. “Obviously, if it’s that personal for him, he knows where he can find me.”

Ryan won this verbal skirmish because he got Saleh to react. For the most part, Ryan helps his own case on ESPN. Since arriving in Bristol, Ryan has been tough on trying to maintain a groove. That he put his personal hostility (fabricated or otherwise) for Saleh out to everyone listening to one of ESPN’s radio platforms, which generated controversy that surpassed the New York market, is a big thing for Ryan. At least for one day, it also helped Ryan stand out in ESPN’s country with a thousand NFL analysts.

For Saleh, all this is not so good. It just made his job harder. There was a better way for him to go. When Saleh heard what Ryan said, his response, as ESPN’s Keyshawn Johnson said, should have been, “Rex who?” Saleh should have laughed at that. He should have verbally placed Ryan in the Big Buffoon File and moved on. Instead, he took this nonsense seriously. Saleh created a distraction.

Saleh also made himself look petty by not taking the big road. If he ignored Ryan, he would have shown not only a lot of class, but a coach who is uniquely focused on getting his team ready to play against the Dolphins on Sunday. That should be his top priority, right?

Instead, the Ryan situation turned into a bad media sequence for Saleh. Later in the week, the coach was branded a flip-flop. After a day defending the media / Valley of the Stupid darling, Mike White, Saleh decided to start veteran quarterback Joe Flacco Sunday against Miami. This opened Saleh up for more media criticism. Is there more to come?

There was no one calling to be exposed. Saleh’s ridiculous reaction to Ryan’s words may well turn out to be an unusual event. But if it is not, if he really is not able to turn the other cheek, Saleh’s media problems have just begun.

With the Giants and Buccaneers matching Monday night, it would not be surprising if Tiki and Ronde show up. And if they do, how long before one of the mouths does Eli-Tiki bring up the “feud” that goes back to 2007.

That was when Tiki, who worked for NBC during the break of an NFL preseason tilt, said Eli’s attempt to run a Giants offensive encounter was “comical.” Eli shot back and the “feud” was underway. The two continued to patch things up, but as it turned out, the Tiki characterization was not wrong.

Anyone who tunes in to ManningCast on ESPN2 now knows that Eli’s comedy styling is genuine. Peyton’s shtick is fun too.

There is a proven way to ruin the TV broadcast of a long awaited game.

Take Tuesday night’s Warriors-Nets tilt on TNT. This was a game where a minimalist approach was the way to go. Instead of letting the game be the case, TNT brainiacs decided to use a 3-person stand. This is especially annoying / distracting when Brian Anderson does play-by-play.

The man likes to yake. And on Warriors-Nets, in collaboration with Stan Van Gundy and Grant Hill, Anderson, who often strays into the analyst field, did not give viewers a chance to breathe. It was non-stop talk for four quarters of an hour – a talk-o-thon.

It seemed like SVG and Hill were struggling to get their points in.

The overlap and conflicts that arise with so many of today’s network television companies working on multiple concerts can compromise journalistic standards.

So it was a refreshing Tuesday to see Mina Kimes on ESPN kick off the Los Angeles Rams game schedule (Kimes is working on their preseason tilts) and “Good Morning Footballs” Peter Schrager, who collaborated with Sean McVay last summer on a podcast series , ripped the team for their awful performance the last two weeks.

CBS pays Tony Romo big dough for being its No. 1 NFL analyst. Still, it certainly must not pay him to comment on NFL controversy. When Jim Nantz brought up Aaron Rodgers’ vaccine / immunization story under Seattle-Green Bay, Romo went completely vanilla. He played Switzerland and told all viewers it was time to move on. Weak. … Early in the match between Tennessee and Georgia, CBS ‘Gary Danielson and Brad Nessler constantly reminded Eyeballs of how Vols plays fast under new head coach Josh Heupel, rarely huddled together. Did the CBS truck listen? Despite the warnings about fast play, CBS insisted on broadcasting replays and lacking live action. Frustrating! … ESPN’s Brian (Mr.) Custer, who works with “SportsCenter,” came out of the queue well after a venue that led into Wednesday’s NBA Countdown. B-Cus asked: “What are the odds of how many words Greeny [Mike Greenberg] will join the NBA Countdown? “Av!… Captivating FAN interview by Craig Carton and Evan Roberts with former NFL QB Ryan Leaf (once ranked as the No. 1 draft bust in NFL history) who focused on his drug problems, the search for redemption and desire to help others.… Bing-bong? What happened to it. And the VOS Gasbags that went wrong over the Knicks should somehow turn the field, no? How fast before they start turning on Tom Thibodeau? … Stephen A. Smith tells anyone who wants to listen that Kyrie Irving has “betrayed” Kevin Durant, so what happened to SAS’s attitude that a man or woman should stand up for what he or she believes in spite of of the consequences? Is not that what Irving is doing?

DUDE OF THE WEEK: ZA’DARIUS SMITH

To pay it forward. It’s not too complicated and it works. Smith, the Packers linebacker who has been injured most of the season, saw a woman in front of him at a car dealership who needed a $ 2,000 water pump. He got up and paid for it. Very fine!

The Big 12 commish is apparently not a type of free speech. He ordered the suspension of Texas Tech’s football radio voices in a game (Brian Jensen and John Harris) to criticize the inconsistency of the game’s officials (they named each member of the officiating team and also called out Bowlsby) during the Red Raiders’ 41-38 victory over Iowa State.

What (Jets defensive coordinator) Jeff Ulbrich said: “I do not know if I answered that question so well, but we are not going to make major fundamental changes.”

What Jeff Ulbrich meant to say: “No amount of change – small or large – will solve this defense.”