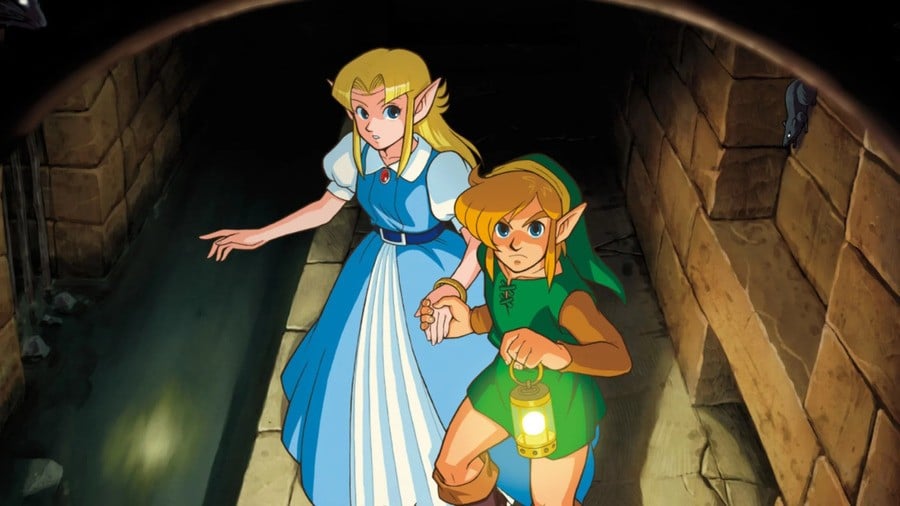 To celebrate the 35th anniversary of The Legend of Zelda, we ran a series of features that looked at a specific aspect – a theme, character, mechanic, location, memory or something completely different – from each of the Zelda games. Today, on the 30th anniversary of LttP, we re-release this feature, where Kate talks about one of the franchises’ most iconic episodes …

I played first The Legend of Zelda: A Link to the Past in 2003 on Game Boy Advance. Not the original, I know – but considering I hadn’t figured out fine engine management when it first came out in ’91, I doubt I would have been able to finish it on the SNES. Then again, I never finished it on GBA either. Technically, I never finished the first temple.

Hold on! Put the pitchforks away! It’s getting better, I promise.

I spent about fifty hours on my little Game Boy Advance SP (with the vision-saving screen light) exploring a link to the world of the past. From its atmospheric, rainy beginning to discovering (and quickly forgetting) my dying uncle inside the castle, the game gripped me in the heartbeats and drawn. But I never became Link of Legend. Instead, I played a role as a guy with a sword and no clue who accidentally bumped through Hyrule, but actually never savings that.

You see, there was a piece in the eastern palace that I could not get past. It involved the darkness, and the awful fast cyclop stuff, and my silly, evolving child brain just couldn’t figure it out. I was not a big fan of the dark to begin with, and my clumsy, small hands found it far too difficult to escape these beasts before they finally succumbed.

Back then, I was bad at games, but I loved them. I would spend hours running around the world of Hyrules in Tidens Ocarina, or explore Peach’s Castle in Super Mario 64. I preferred to play Mario Kart as a driving adventure rather than a race where I spend my time following the tracks in the Kalimari desert and repeatedly being told to go the “wrong way”. I was not as interested in fulfilling the goals of the games as I was in exploring, discovering, and plundering every nook and cranny of their universes. I had time back then and driving to the end was not my priority.

As a result, I spent hours crossing the light world before I even did knew there was a dark world. I could have drawn you a map of A Link To The Past’s Hyrule with my eyes closed, but I could not tell you what it was all about. mente. There was not a part of the upper world that I could not memorize – at least the parts that I could access with the limited tools I had – but whole parts of it remained a mystery, like the book on the shelf in the library or the sword in the lost forests that I could not pull out. None of the characters would help me, not even the fortune teller who would just tell me over and over again to complete the Eastern Palace. But then it was enough. It might seem frustrating to be stuck at the very first temple, but I did not like that. The adventure was for me in my own imagination.

When I look back on my experience with A Link to the Past as a child, I realize how randomly, the epitome It was Zelda. As the very first incarnation of Links’ quest, I explored a world that did not care about me, that existed without me, and that zealously guarded its secrets like a dragon and refused to give them up until I had figured out the exact riddle that it would. I may have been the legend’s link – or indeed the legend’s Lonk, since the game let you name him – but I was a failure, and Hyrule remained closed to me as a result, a monolith of mystery that I could not get past.

In 2021, after my partner’s plague, I downloaded the Nintendo Switch Online service, which gives you access to a lot of forgettable old NES and SNES games and a handful of genius. A Link to the Past was embedded in that cluster of eggs like a nugget of gold – and that meant it was time. In the intervening decades, I had probably learned enough about games to be able to finally slip?

I expected that A Link to the Past would have been poorly aged or compared unfavorably with its descendants. How could something stack up in honor of The wild spirit, or free rein Wind awakens? Could it even compete Phantom hourglass, the first Zelda game I ever completed completely solo?

You probably won’t be surprised to hear that the answer is “obviously, you dingus”, but it was me. Despite being only the third game in the Zelda series, A Link to the Past sets the tone and myth for many of the games that followed it, but the most important, the established, was the duality of the Zelda legend in lower case.

Some of the best games in Zelda’s 35-year history deal with this before-and-after, good-vs-evil dichotomy. The most famous is perhaps the Ocarina of Times two worlds: the world of child links and the world of Adult Links. As a representation of the horrors of a world corrupted by evil, but also the horrors of aging, Hyrule’s two forms are markedly different and disturbing.

Likewise, Skyward Sword has the world above and the world below; A link between worlds has Hyrule and Lorule; Breath of the Wild takes place after the accident, but has windows into the past through Link’s memories; and Wind Waker has the flooded world and the palace under the waves, saved by stasis. Zelda’s story is, time and time again, about showing Link not just what could go wrong if he fails, but what already did go wrong.

A link to the dark world of the past first comes to you as a strange, Link’s Awakening-style dream-like accident. There’s no way of knowing that the strange portal near the Tower of Hera will take you to another country completely, nor that the game’s pink-haired Link will be turned into the Duracell rabbit. The game up to this point has been pretty standard Zelda prize: killing monsters, exploring dungeons, evading all the soldiers trying to kill you on sight, and grabbing important jewels out of conveniently placed chests. There are plenty of old men who give you cryptic quests without offering anything in the way of help, and a princess whose character traits include standing around, being kidnapped and saying “help me, Link”.

Slowly, consciously, the mystery of the dark world unfolds and reveals it as the once golden sacred realm, transformed into a place of nightmares by Ganon’s evil influence. The Light World, despite looking like the whole game in the beginning, is revealed as a prelude to the true story. It’s a fakeout that can only be achieved according to the relative normality of the first two games, a twist that relies on undermining players’ existing expectations.

Perhaps later Zelda games would have made it a much bigger revelation, like Ocarina of Time’s reliance on exposing intermediate sequences. But A Link to the Past, like most retro games, pretty much keeps its mouth shut – except for Sahasrahla’s occasional Help. Link is pretty much left to himself and is just expected to figure it out for himself, which is one of the big reasons I struggled with it as a kid.

I grew up on Ocarina of Time, where Navi tells you everything you need to know, whether you want her for it or not. I was more accustomed to holding the hand of subsequent Zeldas and the tutorial that came with the “new” 3D games, which were forced to teach their players how to move the camera in this confusing dimension.

Quite coincidentally, however, my time with A Link to the Past is a perfect echo of his own story. When I played as a child, I was naive, inexperienced and weak, and A Link to the Past became a story of a peaceful (like) world where nothing had gone completely wrong (yet). Zelda was still in the security of the sanctuary; the world of light was full of people just getting on with their lives. The mysteries of Hyrule were still mysteries and remained just beyond my reach.

As an adult – with not only decades of player experience under his belt, but as an actual game critic – A Link to the Past is, more simply, a game – and games can be fought. A link to the past has one mostly linear path, and its dungeons rely on tropics that are easy to solve once you know how they work. My childhood experience was akin to finding a huge, tightly locked door and wondering what it was hiding; my adult experience is correct to guess that the key is under the doormat.

There is, as with Ocarina of Time, some mishap in my own dichotomy with A Link to the Past. Nothing is as sacred as a child’s imagination. The wonder that I experienced Hyrule with back then is pure magic; to play the same game as an exhausted, game-weary adult is a series of doors to unlock. I consider myself lucky nonetheless: A Link to the Past is a colorful, tightly woven tapestry of legends and fairy tales, a formative plan for the Zelda series, and a masterpiece of design and self-directed discovery that remains unsurpassed by anything else Zelda games, except maybe Breath of the Wild.

There is a part of me that wishes I had played A Link to the Past when it was released so I could experience it immaculate from a lifetime of developed video game logic. But as Link himself discovered over and over again, there are always consequences to rewriting the past. A link to the past is a legend, an almost untouchable part of my childhood, and reliving those memories by bursting through it as an adult is an almost sacrilegious experience, familiar, every time I open the door to something new. But finally solving the mysteries of the game after almost 20 years, and discovering its true depths, is a strangely perfect ending that (magic) mirrors its own narrative.