Minnie Driver has opened up about her messy split with Matt Damon and how she ended a 20-year period of icing him out.

Co-stars on Hollywood blockbuster Good Will Hunting, the couple dominated the screens and magazines after they started dating while making the movie.

RELATED: Matt Damon insists he has never used ‘f-slur’: ‘I stand with the LGBTQ + community’

Still, the two split on incredibly awkward ground after Damon declared he was single in his 1998 interview Oprah – which was news to Driver.

Understandably, the star was not so happy to be dumped on national television and had kept an icy distance to her former beau.

“It seemed like a good forum for him to announce to the world that we were no longer together, which I found fantastically inappropriate. Of course, he was busy declaring his love for me on David Letterman a month earlier.”

But recently, the star says those days are over. See you on Keep it up! podcast, Driver says she came across Damon and his family sometime last year.

“I saw Matt Damon on the beach and I hadn’t had a serious conversation with him since we made the movie,” she said.

“It was last summer and it was actually very nice to see him and his kids and his wife and it all actually felt quite middle-aged, which was reassuring.”

RELATED: Angelina Jolie says she feared ‘for my family’ during her marriage to Brad Pitt

Driver said it felt “nice” to have an adult conversation with Damon, given the media craze that followed them as young people while dating, and then in their breakup.

“I feel like so much of the‘ youth folly ’continued with our first relationship, as if it was amazing and tabloid.

“So it was nice just to have some kind of middle-aged conversation about the weather and stuff like that,” she added. 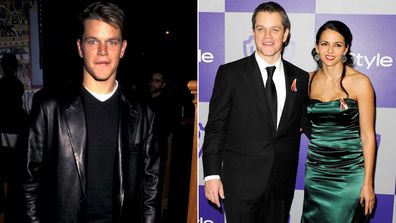