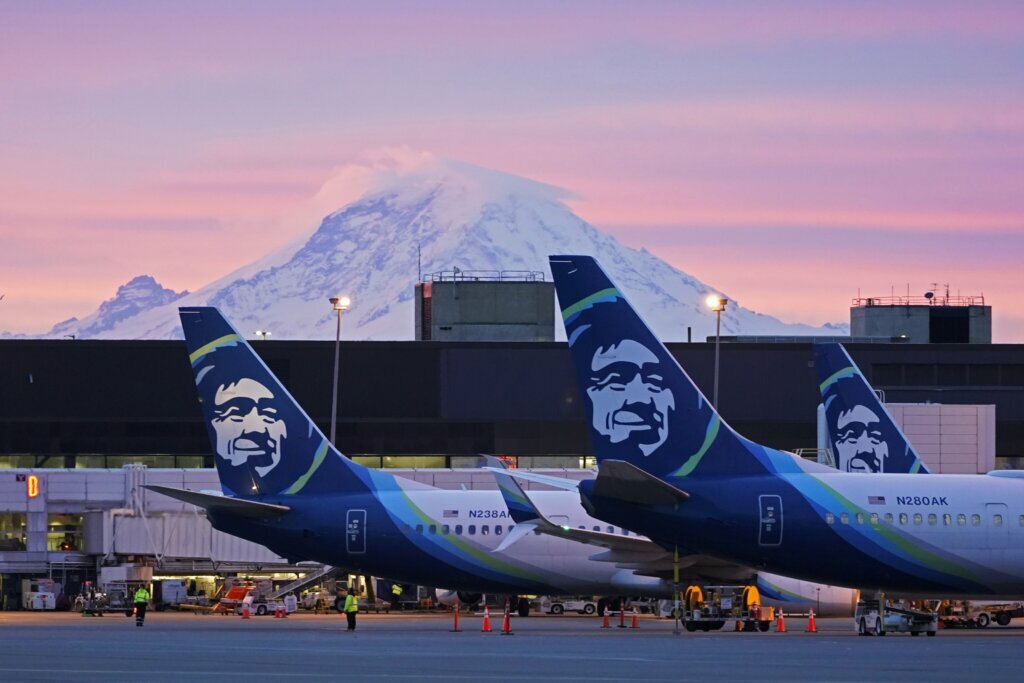 American Airlines, Alaska Airlines and JetBlue are joining United Airlines in requiring employees to be vaccinated against COVID-19, as the…

American Airlines, Alaska Airlines and JetBlue are joining United Airlines in requiring employees to be vaccinated against COVID-19, as the Biden administration steps up pressure on major U.S. carriers to require the shots.

The airlines provide special flights, cargo hauling and other services for the government. The companies say that makes them government contractors who are covered by President Joe Biden’s order directing contractors to require that employees be vaccinated.

American Airlines CEO Doug Parker told employees late Friday that the airline is still working on details, but “it is clear that team members who choose to remain unvaccinated will not be able to work at American Airlines.”

The pilot union at American recently estimated that 4,200 — or 30% — of the airline’s pilots are not vaccinated.

MORE ON THE PANDEMIC:

— California to require school children get vaccines, once age approved

— Justice Kavanaugh tests positive for virus, has no symptoms

— Foundations aim to persuade Americans to get vaccinated

See all of AP’s pandemic coverage at https://apnews.com/hub/coronavirus-pandemic

HERE’S WHAT ELSE IS HAPPENING:

DENVER — At least 92% of Denver’s municipal employees were vaccinated against COVID-19 as of Friday, a day after the city’s vaccine mandate took effect in a bid to slow the spread of the virus during the fall and winter, according to a review of city compliance data.

Employees were required to either prove they were vaccinated or obtain an exemption to the mandate by the end of Thursday or face possible termination.

According to city data, 98.6% of its current 10,869 full-time employees complied with the mandate, either by being vaccinated or receiving an exemption. So far, 652 workers have been exempted, about 6% of the workforce, while another 14 exemption requests were still pending.

HARTFORD, Conn. – A retired Connecticut physician and surgeon voluntarily surrendered her license to practice medicine on Friday to the Department of Public Health after being accused of providing fraudulent medical exemption forms through the mail.

Dr. Sue Mcintosh had her license suspended last week by the Connecticut Medical Examining Board during an emergency hearing. A full hearing on the merits of the case was scheduled for Oct. 5.

State officials, who had received an anonymous complaint about the doctor, allege Mcintosh provided an unknown number of blank, signed forms exempting people from the COVID-19 and other vaccines, as well as mandatory mask-wearing and routine COVID testing to people who sent her a self-addressed envelope. Mcintosh, who hadn’t treated the patients, signed a letter included in the packet of bogus forms with the phrase “Let freedom ring!”

Mcintosh did not respond to a request for comment.

Christopher Boyle, a spokesperson for DPH, said agency officials are considering whether to refer the case to state and federal law enforcement entities.

MINNEAPOLIS — A decline in COVID-19 cases across the United States over the past several weeks has given overwhelmed hospitals some relief, but administrators are bracing for yet another possible surge as cold weather drives people indoors.

Health experts say the fourth wave of the pandemic has peaked overall in the U.S., particularly in the Deep South, where hospitals were stretched to the limit weeks ago. But many Northern states are still struggling with rising cases, and what’s ahead for winter is far less clear.

Unknowns include how flu season may strain already depleted hospital staffs and whether those who have refused to get vaccinated will change their minds.

“If you’re not vaccinated or have protection from natural infection, this virus will find you,” warned Mike Osterholm, director of the University of Minnesota’s Center for Infectious Disease Research and Policy.

Nationwide, the number of people now in the hospital with COVID-19 has fallen to somewhere around 75,000 from over 93,000 in early September. New cases are on the downswing at about 112,000 per day on average, a drop of about one-third over the past 2 1/2 weeks.

MONTGOMERY, Ala. — Amid a national debate over the use of pandemic relief funds, Alabama lawmakers swiftly approved a plan Friday to tap $400 million from the American Rescue Plan to help build two super-size prisons, brushing off criticism from congressional Democrats that the money was not intended for such projects.

In a bipartisan vote that brought few dissents, the Alabama Senate voted 29-2 to approve the $1.3 billion prison construction plan, and 30-1 to steer $400 million of the state’s $2.1 billion from the rescue funds to pay for it.

With legislative leaders standing behind her, Alabama Gov. Kay Ivey signed the bills into law. Republican Sen. Greg Albritton said state officials are confident they can legally use the pandemic funds, and said the construction to replace many existing prisons will “go a long way” to addressing the state’s longstanding problems in prisons.

The latest surge has started easing but continues to strain hospitals. The state reported 55 additional deaths as well as over 3,600 additional confirmed cases Friday. That increases the pandemic totals to 20,039 deaths and nearly 1.1 million cases.

The current surge has seen the state’s hospital system burdened again with large numbers of patients. More than 1,750 COVID-19 patients occupied hospital beds as of Thursday.

ANCHORAGE, Alaska — A highly contentious debate over a proposed mask mandate for Alaska’s largest city that has included Holocaust imagery and a gay slur will continue next week on Monday.

Mayor David Bronson opposes the mask mandate and apologized Thursday for his comments supporting some residents’ use of Holocaust imagery, like wearing yellow Stars of David, to liken the proposed mandate to the oppression of Jewish people in Nazi Germany.

The Anchorage Daily News reports Bronson also called for people on both sides of the issue to be more civil. Four people at Wednesday’s meeting were arrested, including a man who called the assembly’s vice chair, Chris Constant, a homophobic slur.

“I didn’t stand up and speak in your defense. And I apologize for doing that. Quite frankly, I was caught off guard. And then he was gone before I gathered my thoughts, and I apologize for not speaking up. What was said was intolerable.” Bronson said.

Constant said he wasn’t surprised with the slur.

“The part that in fact shocked me to silence was when roughly 200 people cheered zealously. That was the part that zinged me and really took my breath away for a minute,” he said.

Constant added: “What we have to do is figure out how together, we can be better. And that is not a that-tribe-versus-that-tribe issue. That is a community issue in Anchorage, and this moment is an opportunity for us to move through this to a better place.”

A 34-year-old man and a 33-year-old woman uploaded falsified negative test results into the Hawaii Safe Travels portal and arrived in Lihue on an American Airlines flight from Los Angeles earlier this week, Kauai police said.

After they were arrested, they were released pending investigation and caught a flight back to Los Angeles.

Travelers entering Hawaii must quarantine for 10 days unless they have been fully vaccinated in the United States or test negative for COVID-19 before departing for the islands.

Hawaii authorities have been arresting people who violate travel rules, including a woman from Illinois investigators said uploaded a fake vaccination card that misspelled Moderna as “Maderna.”

WASHINGTON — U.S. health officials are preparing to consider more COVID-19 vaccine boosters for adults and the first vaccine shots for children younger than 12.

The Food and Drug Administration said its panel of outside vaccine experts will meet Oct. 14 and 15 to consider whether to recommend booster doses for adults who received the Moderna and Johnson & Johnson vaccines. The FDA is not required to follow the panel’s advice, though it often does.

If the FDA authorizes third doses of the vaccines a separate panel of advisers to Centers for Disease Control and Prevention will make specific recommendations on who should get them.

The FDA and CDC signed off on booster shots of Pfizer’s vaccine last month for key Americans who face higher risks from COVID-19.

Additionally, the panel will hear presentations on the safety and effectiveness of mixing different vaccine brands when giving booster shots.

The FDA also set an Oct. 26 panel meeting to consider Pfizer’s COVID-19 vaccines for children 5 to 11 years old. Currently the vaccine is authorized for children 12 and older.

It provides up to $25,000 in emergency rental assistance to cover up to 12 months of past due rent and up to three months of future rent payments for tenants suffering a financial hardship related to the COVID-19 pandemic. Payments are made directly to the landlord on behalf of the tenant, but only if the landlord doesn’t pursue eviction.

“Having a roof over your head is the foundation of a thriving life,” Pritzker said Friday in a release, “and Illinois is fiercely combatting the pandemic’s destabilizing effects on that foundation by keeping our residents on their feet.”

The state will mandate the vaccine in kindergarten through sixth grades once the federal government gives final approval for anyone 5 and older.

Students would be granted religious and medical exemptions, but the rules for how the state would apply those exemptions have not been written yet.

In August, California became the first state in the U.S. to require all teachers and staff in K-12 public and private schools to get vaccinated or undergo weekly COVID-19 testing. Newsom also issued a school mask mandate this summer for indoor classes that applies to all teachers and students.

NEW ORLEANS — Louisiana’s largest health system is ratcheting up pressure to get vaccinated against COVID-19. The Times-Picayune/New Orleans Advocate reports Ochsner Health told employees it will charge a monthly premium of $200 if a spouse or domestic partner covered under an Ochsner health plan is not vaccinated. Ochsner has previously set an Oct. 29 deadline for all employees to be vaccinated.

President and CEO Warner Thomas says the surcharge is part of an effort to keep health premiums low for employees. As a self-insured organization, Ochsner bears the cost of COVID-19 treatment for patients who are on its insurance plan.

“We spent more than $9 million on COVID care for those who are covered on our health plans over the last year,” Thomas told The Times-Picayune/New Orleans Advocate in an emailed statement, which included intensive patient care.

More than 2.1 million people in Louisiana are fully vaccinated against COVID-19, about 45% of the state’s population, according to health department data.

The state reported 872 coronavirus cases and 49 confirmed deaths on Thursday. Louisiana has registered a total of 740,533 cases and 13,949 deaths.

(This item has been corrected to show Louisiana has fully vaccinated 45% of population, not 56%.)

WASHINGTON — Biden administration officials say a new pill that could provide an easier, effective way to treat COVID 19 is good news, while adding vaccination remains the key to controlling the pandemic.

Officials at drugmaker Merck say they’ll soon seek regulatory approval for the experimental pill, which reduced hospitalizations and deaths by half in people recently infected with the coronavirus.

“We want to prevent infections, not just wait to treat them when they happen,” says Zients at the briefing on Friday.

If it’s approved by the Food and Drug Administration, the government has contracted to buy 1.7 million doses of Merck’s medication.

Copyright
© 2021 The Associated Press. All rights reserved. This material may not be published, broadcast, written or redistributed.