I thought of the author’s ethical responsibility to real people below Lackawanna Blues, which premiered 20 years ago at the Public Theater and now makes its Broadway arc at Manhattan Theater Club. In it, writer-director Santiago-Hudson incorporates a few dozen characters he encountered when he was growing up in the 1950s and 60s in a boarding house in New York mostly black residents. Chief among them is Rachel Crosby, also known as Nanny, a strong-willed matriarch who protects neglected children, abused women and broken men.

Who knows how much of the story is freely adorned or remembered with literal truth. Did schoolboy Ruben write down the stories he heard? Did everything he says happened happen? Honestly, I do not care, and those people have long returned to dust. What matters is that an artist made a beautiful folk patchwork from childhood memories.

This is an adoption educational novel; Santiago-Hudson’s single mother (a bartender) did not have the time or resources to raise him properly. So crying, she handed the child over to Nanny, who made the boy’s care and education her special project. In a later heroic brawl, the remarkable woman stood up against a violent black boxer whose battered white wife sought refuge in one of Nanny’s houses. With a shift in posture and a change of arms, Santiago-Hudson evokes a tense distance between the violent pugilist and the resolute nanny.

Robust yet graceful, the actor completes dozens of heavily etched transformations in 90 minutes as residents of Nanny’s house come forward to share their stories. There is one leg Mr. Lemuel Taylor, whose tongue peels in and out of his mouth like a lizard. Numb Finger Pete is so named because of the numbers he lost to frostbite; he and Taylor get into an awkward fight. Little Paul confesses to the murder of a girlfriend and her lover in a jealous rage, and how he learned in prison to “speak American.” As a boy, Luscious avenged a white man for an insult and then hid in a swamp where he was bitten by a snake and lost an arm. Although the stories smoke about injustice and pain, they are easily told by the survivors.

We keep coming back to these wounded, yet stubborn men who must have fascinated and frightened the young Ruben. Nanny is the center of the story as the surrogate parent who never let down our narrator and always believed in him. Although she is portrayed as part entrepreneur and part saint, Nanny has her own weakness: handsome but unreliable men. One of them, the rude Bill, accidentally abuses the young Ruben and incurs Nanny’s anger.

Such basic storytelling, a collection of vignettes spiced with musical passages, could have been presented quite minimally, but MTC wraps Santiago-Hudson’s colorful yarns into a beautiful package. Michael Carnahan’s magnificent dilapidated proscenium arches across the stage; Jen Schriever’s light evokes ghosts and shadows from before; Darron L. West’s sound design balances speech and music – of which there is an abundance. Santiago-Hudson is not alone on stage: He is backed by a talented guitarist Junior Mack, who drums and worries about the original blues score by Bill Simms, Jr. Santiago-Hudson moans with harmonica, moans and hangs in the air when the words just are not enough.

“I wonder when I’m going to be called a man?” Santiago-Hudson croons in the blues classic by Big Bill Broonzy. In this vicious and unjust world, his play suggests, it can take more than a lifetime to grow up and claim your dignity. 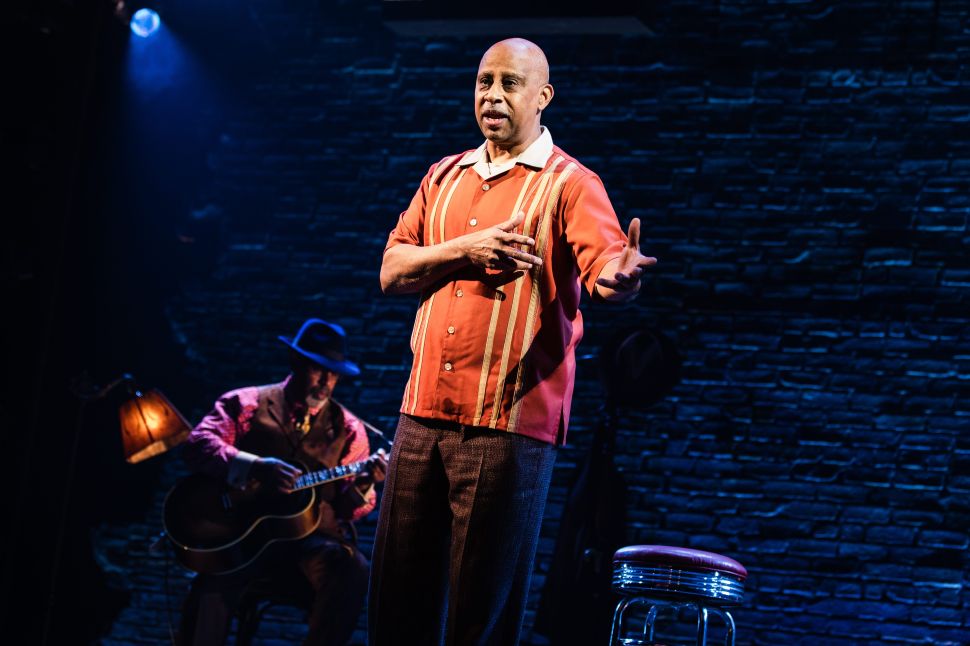