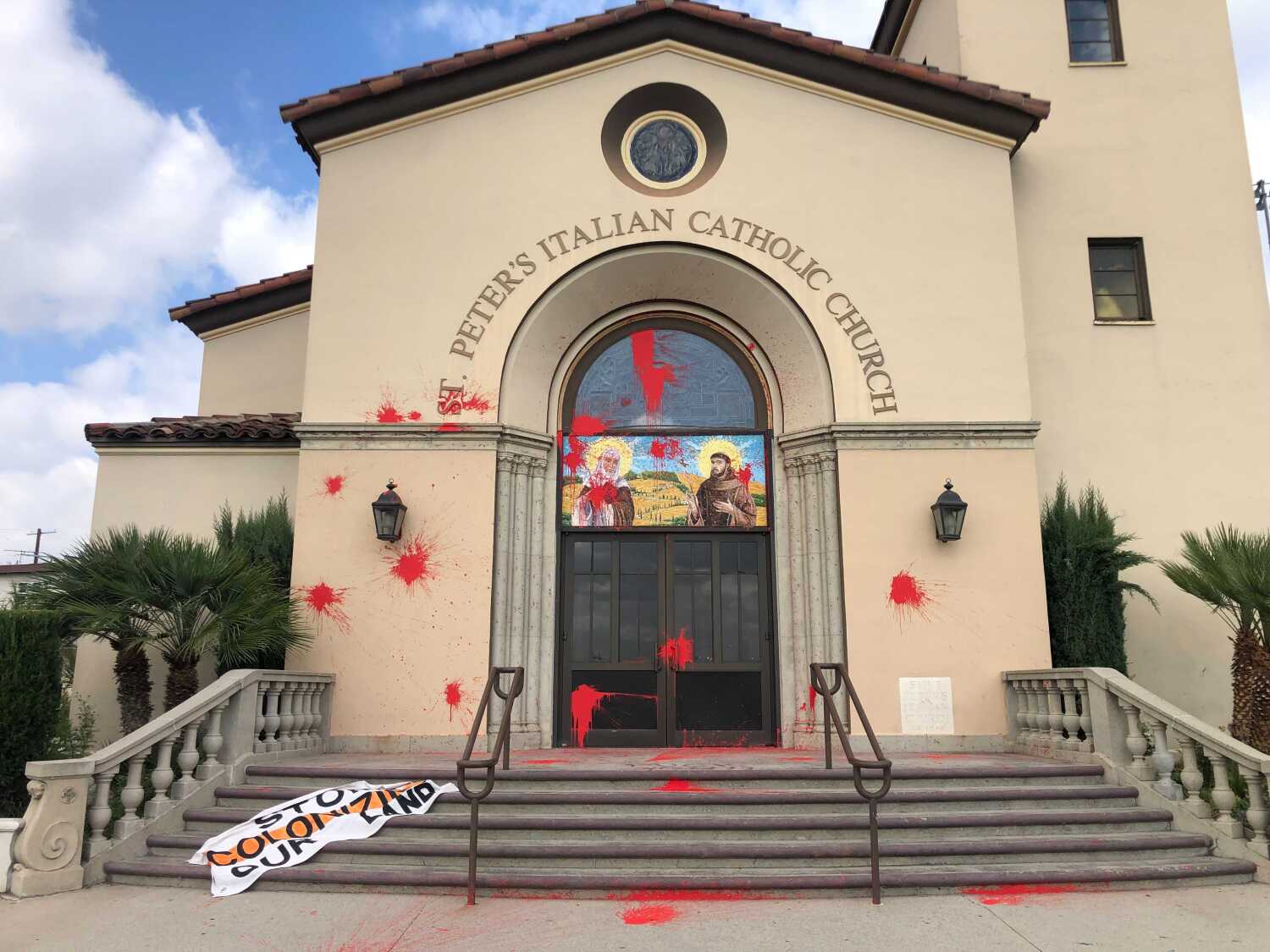 The delicate, gold-stained mosaic that hangs over the entrance to St. Peter’s Italian Catholic church on the outskirts of Chinatown, was destroyed with bright red paint Monday morning in an apparent vandalism, officials said.

A small crowd had gathered at the building at noon, where detectives investigating the site said it appeared to be connected to the day’s holidays, which include Indigenous Peoples’ Day and the former Columbus Day.

On a fallen banner on the church grounds stood “STOP COLONIZING OUR COUNTRY”, while graffiti on the sidewalk uttered phrases including “Land Back”, “USA” and “Stolen Land”.

Explosions of red paint scattered church steps, doors and walls on North Broadway, which was established in 1904 and holds trade fairs in English, Spanish and Italian.

Arturo Martinez said he first saw the red paint around noon. 8:15 on the way to his daughter’s nearby clothing store. He thought it happened sometime after 6 p.m. 6, because a neighbor did not previously see signs of vandalism.

“I think it all has to do with Columbus Day,” Martinez said, noting that St. Peter’s Basilica is an Italian church. “We know the history of Columbus, so they have taken a direct hit to Italy and what Columbus represents.”

Columbus was Italian, but his famous travels were sponsored by Spain.

The Los Angeles City Council and the LA County Board of Supervisors in 2017 voted to replace Columbus Day with Native People’s Day in recognition of the harms and injustices that Native Americans have suffered under Christopher Columbus and other colonial settlers.

“This gesture of replacing Columbus Day with Indigenous People’s Day is a very small step in apologizing and correcting,” Councilman Mike Bonin said at the time.

The Archdiocese of Los Angeles has worked closely with several of LA’s original communities to recognize the church’s role in the colonization of California and to “heal the wounds of the past through dialogue and understanding,” said spokeswoman Carolina Guevara.

“As a faith community, we offer our prayers to those who felt compelled to express their concerns in this way,” Guevara said. “We also pray for the parish community as they work to clean up the damage.”

Church officials noted that it was premature to link the vandalism to any group or person. Officer Jeff Lee of the Los Angeles Police Department said no suspects had yet been identified.

Last year, the 250-year-old San Gabriel Mission was purged by a firefighter, though the suspect’s motive was unclear.

Martinez said he could not remember other acts of such vandalism in the neighborhood.

“There is a real way to protest, and that is obviously not the case,” he added.