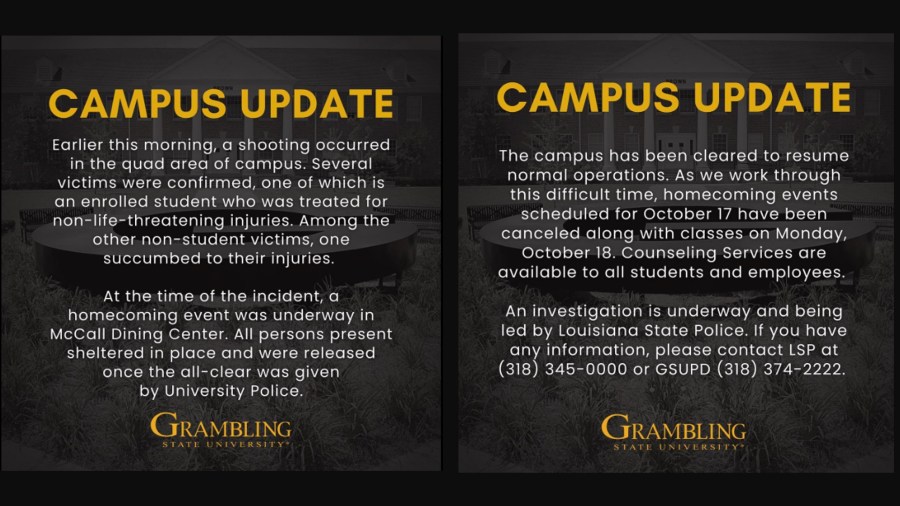 UPDATE: Grambling State University posted to their social media that effective immediately from 9:30 pm to 6:00 pm. Teaching will also not resume until Wednesday. See the Facebook post below for full statement.

UPDATE: Louisiana State Police are currently searching for the suspect involved in the early-morning shooting on the Grambling State University campus. According to a Facebook post, they are also still looking for Jatavious Carroll, also called “Rabbit” after a shooting on the same campus just four days ago, on October 13th.

Louisiana State Police say seven people were injured in the shooting Sunday morning and one person died. Of those injured, one of the victims was a student at the university.

GRAMBLING, La. (KTVE / KARD)– Grambling State University has just announced on their Facebook page that all Homecoming events scheduled for today, Sunday, October 17, have been canceled due to another early morning shooting on campus. The notice states that several people were injured, including students and non-students. One of the non-student victims is dead.

There will also be no classes on Monday, October 18 for students. Counseling is provided for all students and staff.

Man in Delhi wanted for shooting at Grambling State University, wounding 1 and killing another

Louisiana State Police are working on this case. There will be a press conference on campus in front of Long Jones Hall today at 14:00 and we will be on hand to provide you with the latest information in this evolving story.