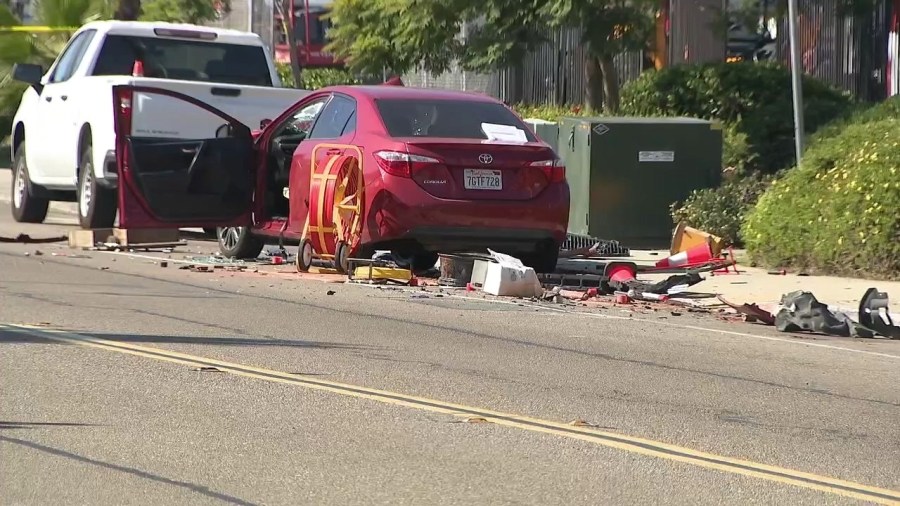 CHULA VISTA, California – A driver crashed into a man behind his AT&T work truck on a Chula Vista street on Wednesday morning, leaving the worker badly injured.

The accident happened on C Street and Date Avenue just before 11 a.m., according to the Chula Vista Police Department. A 28-year-old man was heading west along C when he drove into the parked truck.

Witnesses told FOX 5 that the employee had been behind the white company pickup when the red sedan drove into him and then the truck, pulled the man forward and overturned the vehicle further down the street.

“(It) hit him so badly that he, I think, dragged him down the street and cut his legs off,” Christina Rodriguez, who lives on the block, told FOX 5.

Police say the worker was left trapped under one of the cars involved in the accident. Firefighters, paramedics and police arrived and a resident rushed over with a jack to help lift the vehicle off the victim, police said. He was taken to hospital with “serious life-threatening injuries”. The driver was also taken to hospital, but his injuries were unknown, authorities said.

The driver barely missed another worker, Rodriguez added. That employee jumped back at the last minute to avoid the car, according to the neighbor.

Traffic investigators blocked C Street from traffic in the immediate area while they pieced together what happened. “At present, drugs and alcohol are not thought to be a factor in the collision,” the CVPD said.

Anyone who has seen the accident or has further information was asked to contact the police.