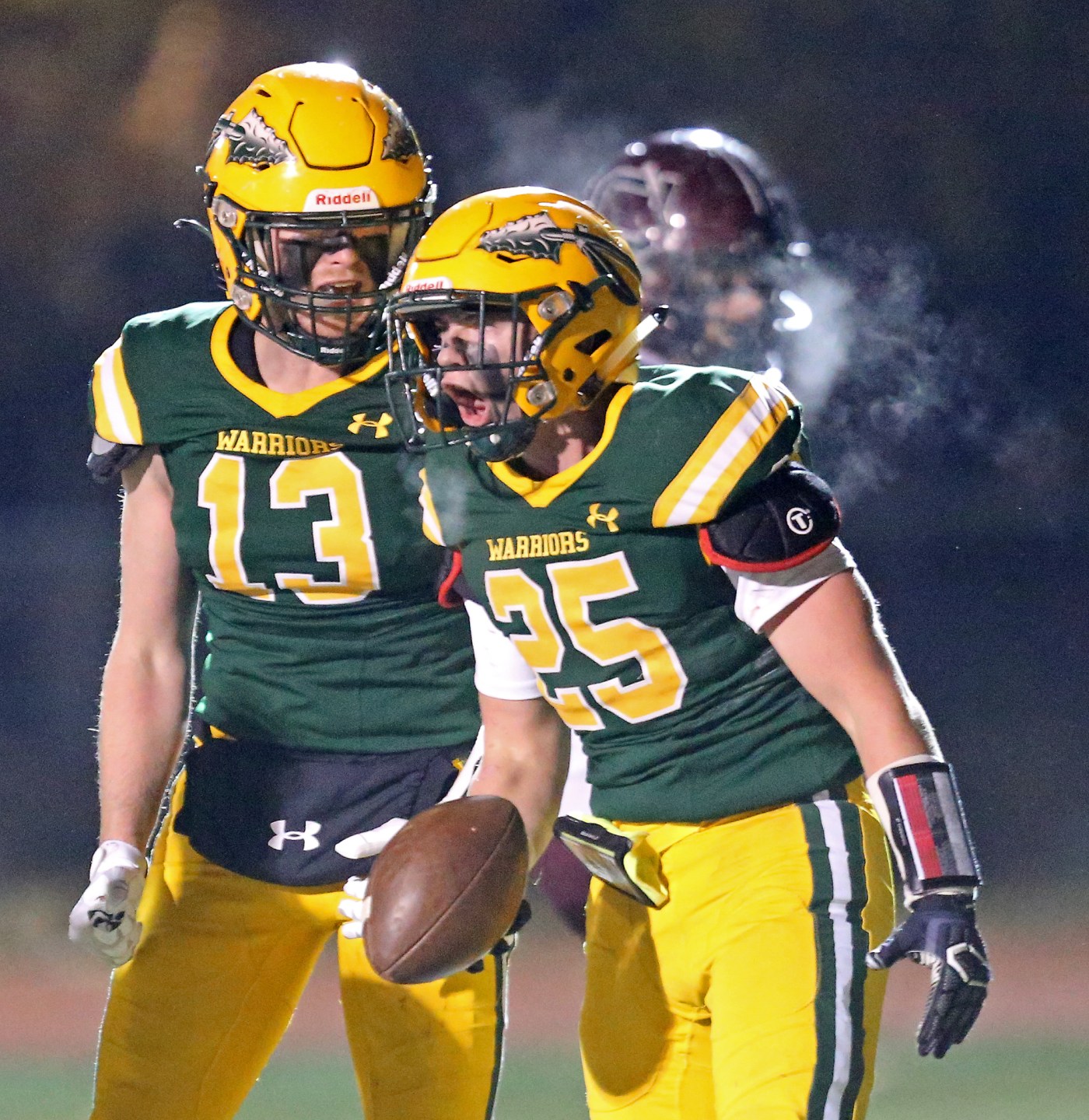 WRENTHAM – The King Philip football team is built for November.

No. 3 Warriors put a clinic in defense and field position in passing No. 14 Chelmsford as KP kept the Lions to under 40 yards of total offense in a 35-0 victory in the 16th round of Div. 2 playoffs.

Junior Ryan Gately and senior Crawford Cantave each ran after a couple of touchdowns to drive the offense, who took advantage of short fields through the chilly Friday night.

“It’s King Philip football,” Cantave said. “First I have to thank the scammers up front. Without them we will not score. Secondly, coach (Matt) Wassel. We carried out his plan in defense and that was why we won the match.”

The quarterfinals will feel a lot like the old Div. 2 Southern playoffs for KP (7-1) as the Warriors face Hockomock League rival Mansfield for the fourth consecutive season, and for the second time in three weeks after a 24-6 victory in their regular-season final. No. 6 Hornets defeated No. 11 Barnstable in their opening Friday night, 28-21.

“By having to play Mike twice, I think he will make some adjustments,” laughed King Philip head coach Brian Lee about playing the Hornets and coaching Mike Redding again. “They hate us, but in a good way. It’s on.”

KP’s first three goals all started in Chelmsford Territory to take a 21-0 lead at the break, going 36, 46 and 45 yards after a fumble and a pooch point on their first two possessions.

Cantave beat the Lions defense to the pylon on an end-around from 5 yards out on the first and Gately threw himself in for a 3-yard on the second after quarterback Charlie Grant extended the drive with a fourth-down throw to Jonathan Joseph.

Gately went 26 yards for his second TD on the third, finishing with 135 yards on 19 carries.

The KP defense kept Chelmsford on zero netyards and without a first try in the first half. The Warriors fired Lions QB Kyle Wilder five times in total and got an interception from Thomas Brewster on Chelmsford’s first game from scrimmage.

Cantave increased the lead to 28-0 with a weaving 28-yard run through the Chelmsford defense, and Grant beat it with a 14-yard TD throw to Danny Clancy, making it playing time with just over five minutes left.

“Field position and being at home, that’s a huge thing,” Lee said. “Having to drive an hour, I’m sure it’s not ideal for Chelmsford. They’s a good program with a lot of pride. We played well tonight, which was nice to see. After week 2 I thought it has we do not, but every week we have become a little bit better. ”