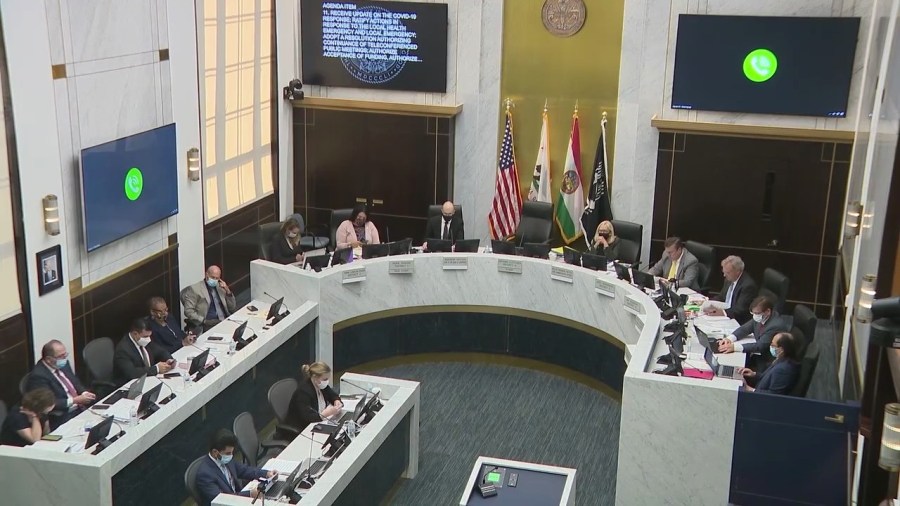 SAN DIEGO – The San Diego County Board of Supervisors has voted 3-1 for a policy change aimed at curbing hate speech and inappropriate behavior during county meetings.

The board’s action follows a controversial session last week in which some members of the public used racist and threatening language.

Chairman Nathan Fletcher and Supervisors Terra Lawson-Remer and Nora Vargas voted in favor of the amendment, while Supervisor Joel Anderson opposed. Supervisor Jim Desmond was on a pre-planned trip and absent from the meeting.

The change added a number of policies, including:

The policies, which required a three-vote majority, take effect immediately, with the next board meeting scheduled for November 16.

After months of vicious public meetings, the policy change was prompted last week by a man who said he wanted more of the supervisors dead – apparently in response to the county’s continued efforts to fight COVID-19 – and addressed a racist slander against the county’s public health director Dr. Wilma Wooten, who is black.

The remark sparked an angry response from Supervisor Nora Vargas, who filled her reply with an exclamation point.

In a statement following Wednesday’s special meeting, which was held via teleconference, Fletcher said the board “took action to reform our rules and procedures to ensure we can have a safe and healthy environment to conduct people’s business while allowing full public participation. “

“San Diegans wants to see progress in the challenges our region faces – affordable housing, homelessness and securing safe and healthy communities,” Fletcher added. “It is now time for us to get back to work on the real problems our region is facing.”

During Wednesday’s meeting, Fletcher said the policy could be changed if necessary. Vargas, who proposed the policy change with Fletcher – said it was unfortunate that they should meet “under these circumstances”, but hoped that “this will result in a more accommodating environment at the meetings.”

“I have been very concerned about what I have seen,” Vargas said, adding that when she was a spokeswoman on the board, she was never disruptive or racist.

“We try to make sure we give everyone access and the opportunity to speak,” Vargas said.

“I absolutely welcome differences of opinion and perspectives,” Vargas said, “but I really want us to find a way to bring decency, kindness and respect back to our public meetings.”

Lawson-Remer described the vote as “a step forward today, because honestly we have an emergency”, but supervisors should be open to feedback from stakeholders and change policy if necessary.

Lawson-Remer added that she was very hopeful that feedback “creates a safe space with a real public forum that does not reinforce bullying and hatred because that is accidentally what we have done.”

When his name was called to vote, Anderson replied, “Sorry no.” He said he strongly condemned the hateful remarks made last week, but that residents, especially rural areas, need more time to review agenda items.

Anderson added that many of these communities do not have decent WiFi access, making it difficult for them to send emails to the board about an issue or watch a meeting online.

“For them to drive an hour, to get a minute, worries me a lot,” Anderson said. “We allow the voice of the crocheters to force our hand to shut down legitimate input.”

Supervisors on Wednesday also heard from nearly 40 members of the public who called in.

Proponents of her case have been working to make the actual transcript of this statement available online.

Fletcher said after last week’s meeting that while dissent is a healthy part of a functioning democracy, it has been sad to see vaccine mandate opponents launch personal attacks on board members and county officials, simply because they do not agree on their policies.

“Hate speech and the creation of a hostile work environment for county staff will not be tolerated,” he said. “The changes to the rules and procedures of our Supervisory Board that we have proposed are intended to curb the vulgar, racist and profane behavior that has taken place recently during the public comment section of our meetings.

“Some people’s actions prevent good people who really want to participate in their government from showing up to testify, and that needs to change,” Fletcher said.

The policy adopted by the Board allows for the adoption of a Code of Civil Discourse developed by the National Conflict Resolution Center, takes stricter positions against harassment and abuse, gives the Board more discretion regarding the amount of time allocated to public speakers and adopts other procedural changes to allow public participation.