The northern Italian city of Brescia, despite calls from the Chinese government to cancel it, is hosting the first international solo exhibition of the 35-year-old artist and exile from China living in Australia.

Badiucao’s works are “full of anti-Chinese lies” that “endanger the friendly relations between China and Italy”, the Beijing Embassy in Rome accused in a letter sent last month to Brescia City Hall.

But the city stood its ground.

“None of us in Brescia, either in the city council or among the citizens, had the slightest doubt that this exhibition would continue,” Deputy Mayor Laura Castelletti told AFP.

Brescia, known for its Roman ruins, has a long tradition of welcoming dissidents, painters and writers in the “defense of artistic freedom,” she said.

The last was in 2019 with works by Kurdish artist Zehra Dogan, who spent almost three years in prison in Turkey.

The new show, “China is (not) near – works by a dissident artist”, which opened on Friday, condemns political repression in China and the country’s censorship of the origin of coronavirus, two explosive topics for Beijing.

The exhibition, whose title is a reference to a famous Italian film from 1967, “China Is Near”, runs until February 13 at the Santa Giulia Museum.

In an interview with AFP, Badiucao – who has been dubbed “the Chinese Banksy” – said he was “very happy and proud” that the city “had the courage to say ‘no’ to China in defending fundamental rights.” 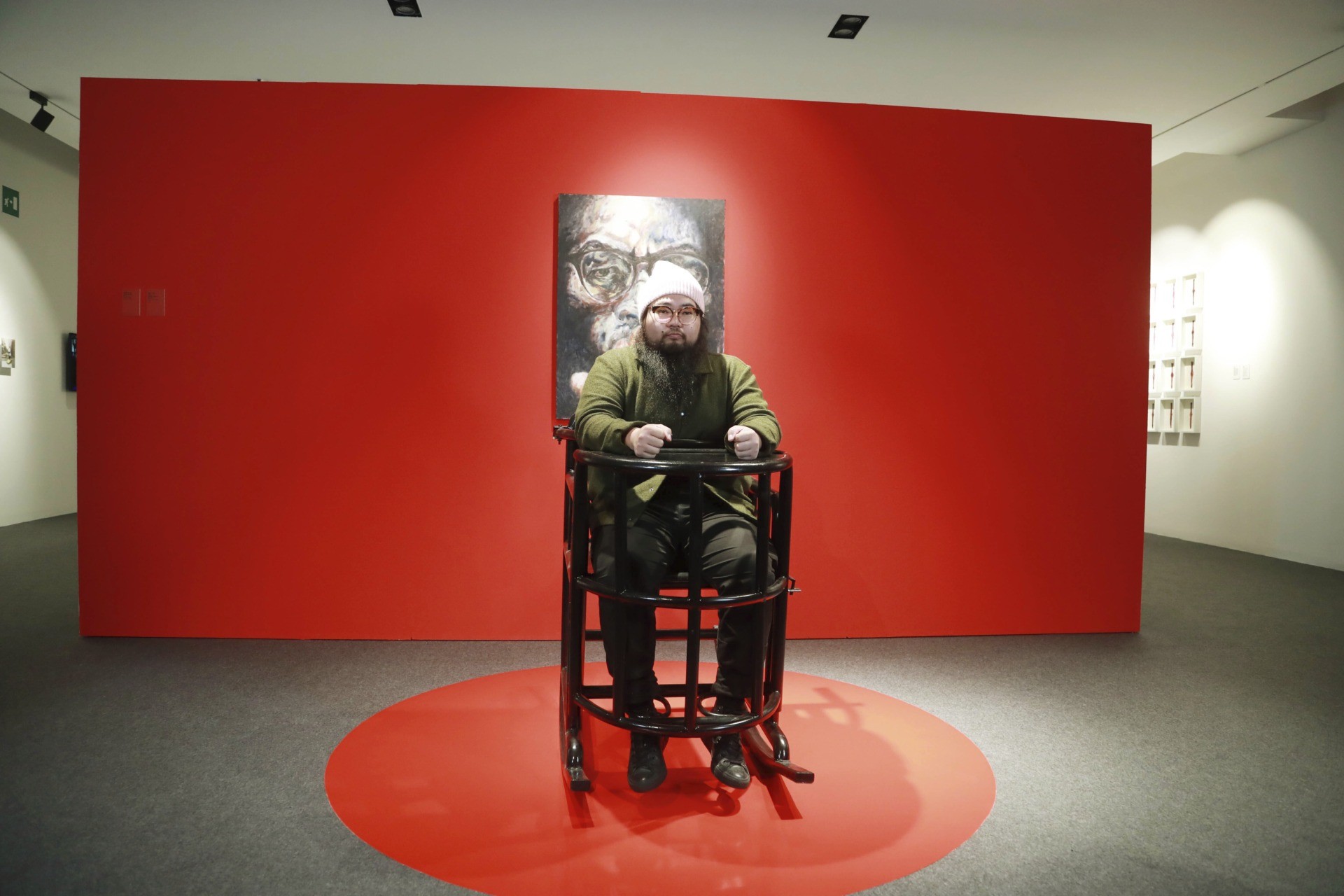 The artist Badiucao is sitting in a torture chair, part of his exhibition at the Santa Giulia Museum in Brescia, Saturday 13 November 2021. (AP Photo / Felice Calabro ‘)

Plans for a show in Hong Kong in 2018 fell through after pressure on the artist and his entourage, said the spectacle-protected Badiucao, who has a long, tousled beard.

“The National Security Police went to intimidate my family in Shanghai,” he said, adding that they threatened to “send officers” to the opening if the exhibition was held.

Among the works on display in Brescia that have provoked Beijing’s anger is a famous image of Chinese President Xi Jinping fused with the face of Carrie Lam, Hong Kong’s CEO, to illustrate the erosion of autonomy in the former British colony.

The Chinese Communist Party “believes that all free artists are its enemies, that’s why it hates me so much,” Badiucao said, adding that he receives “daily death threats” on social media.

Due to strong censorship, he said he did not learn until decades later, as a college student studying law in China, about the government’s brutal repression of protesters in 1989 at Tiananmen Square.

He decided to dedicate himself to art, moving to Australia in 2009 and only revealing his identity publicly on its 30th anniversary a decade later.

Another of his works depicts 64 watches painted with the artist’s own blood, representing those given to Chinese soldiers, according to Badiucao, as a reward for their participation in the bloody attack on Tiananmen Square.

The exhibition also pays tribute to “Tank Man”, the unknown man wearing a white shirt and with two plastic bags, which stood up against advancing tanks.

In a nod to current events, the mind rebuilt by Badiucao is topped by bullets resembling the Covid-19 virus under a microscope.

Hanged on one of the museum’s walls are pages from a diary of a resident of Wuhan, the epicenter of the pandemic, who managed to circumvent censorship to tell about his daily life at the beginning of the incarceration.

The dissident said there was no doubt that Beijing was responsible for the pandemic, claiming it did not follow warnings about the coronavirus’ first appearance in Wuhan in late 2019.

The exhibition “has no intentions of offending the Chinese people or Chinese culture and civilization,” said the president of the Brescia Museum Foundation, Francesca Bazoli.

By showing these works, she added, “we support freedom of speech”.