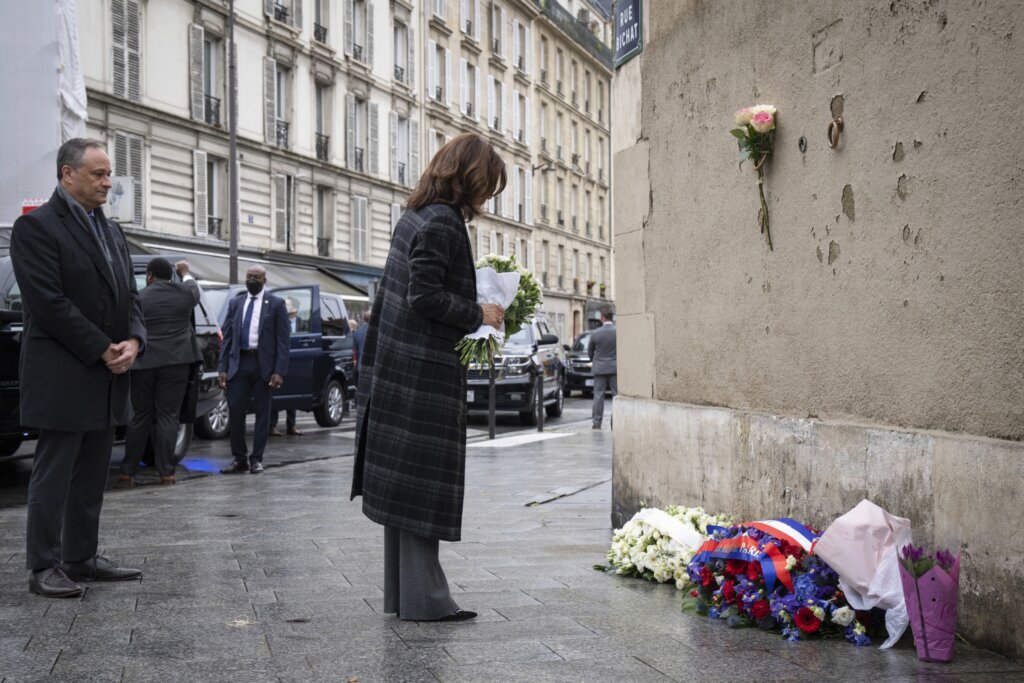 PARIS (AP) – US Vice President Kamala Harris laid flowers at a memorial in Paris to mark the anniversary of the Saturday of Islamic State attacks that killed 130 people in the French capital six years ago.

Her stop at the Le Carillon bar, one of several nightclubs and places attacked by gunmen and suicide bombers on 13 November 2015, closed a four-day fencing trip to France.

Together with her husband, Doug Emhoff, Harris laid a bouquet of ivory flowers at the foot of a victim’s memorial and talked to people inside the bar. On its disk were lit 13 candles in the French colors blue, white and red.

Nine Islamic State gunmen and suicide bombers struck within minutes of each other in 2015, targeting the National Football Stadium, crowded cafes and the Bataclan Concert Hall – the site of the worst massacre of 90 dead. It was the deadliest violence to hit France since World War II and one of the worst terrorist attacks to hit the West.

This year’s memorial ceremonies come amid a mammoth trial in Paris for 20 men accused of carrying out the bloodshed or of having aided the attacks. The trial opened in September and has heard weeks of burning testimony from survivors and first aiders. Six of the accused are being prosecuted in absentia.

French officials also held a series of memorial services on Saturday at the scene of the attack.

Harris ‘trip was part of a sustained effort by Washington to rectify relations with France, the United States’ oldest ally, which was shaken by a secretly negotiated US-British submarine agreement with Australia that led to an earlier agreement with France. the scrap.

Harris said Saturday before his departure that the “very productive” trip would be followed by more work.

“This trip was, of course, about clarifying the long-term relationship, but also about that as we enter a new era for the world, our work will continue,” she said. “We do so with a sense of optimism, but a sense of strong conviction that the partnership between the United States and France remains and will continue to be very strong.”