Showtime’s new drama, Yellowjackets, teaches us that the high-school girls’ athletics-to-brutal-survival strategy may not be as long as we should think.

In a moment, we’d like to hear what you think of the series starring Juliette Lewis (Secrets and lies), Christina Ricci (Lizzie Borden Chronicles), Melanie Lynskey (Togetherness) and Tawny Cypress (Unforgettable). But first a quick summary.

INTO THE FOREST, IT’S TIME TO GO, I HATE TO GO, I HAVE TO | The episode starts as a girl wearing only what looks like a nightgown running through the snow-covered forest. She cries as she passes runes and stick figures dangling from the trees, and eventually she falls into a pit and spits herself on poles along the bottom. We notice that the girl is wearing a gold pendant, then there are some who have furs on and one very spooky mask approaches the pit and looks down. 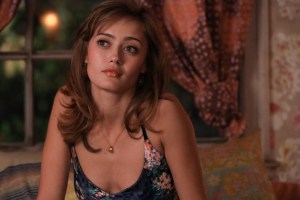 SECRETS AND KEG STIFF | After a short contemporary interlude, where an interviewer asks different people “what really happened out there, ”soon we are thrown into a girls’ soccer game in 1996 New Jersey. (The Umbros! I’ve dying of nostalgia!) The winning team, aka the Yellowjackets, are ecstatic. “We are going to citizens!” they rejoice.

As the hour unfolds, we meet different members of the team. There’s Jackie (Bitter‘s Ella Purnell), the lively team captain who has been dating his girlfriend, Jeff, since freshman year. (Although they have been separated a number of times, she’s sure they’re both technically virgins, she assures her friend, Shauna.) Shauna (the book Thief‘s Sophie Nélisse) is Jackie’s quieter and – let’s just say – smarter best friend. On her way to school one morning after Jeff sneaks out of Jackie’s bedroom window, Jackie enthusiastically talks about how she and Shauna will share a dorm room at Rutgers University when they both go there this fall. 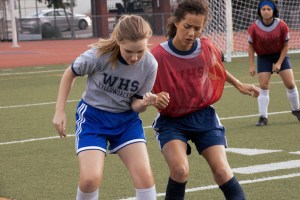 We also meet Natalie (Chicago Med‘s Sophie Thatcher), a punk rock-like “burnout” who does not mind getting into trouble; and Taissa (For the People‘s Jasmin Savoy Brown), an aggressive competitive player who is so worried that a weaker member of the team will hurt their chances for national matches, she tackles the girl and breaks her leg during a match, making the poor kid out of position to participate in the competition. There is also a very Christian girl named Laura Lee (newcomer Jane Widdop), a girl named Van (Santa Clarita diet‘s Liv Hewson) with an alcoholic mother, one named Lottie (newcomer Courtney Eaton), who is both rich and addicted to some form of medicine, and the team’s socially awkward equipment manager Misty (Shameless‘Samantha Hanratty).

GROSS LANDING | The night before the girls go to the championship, they participate in a barrel party in the woods, and a whole lot of things go down. Natalie dropper LSD. Shauna confronts Tai with harming their teammate Allie and calls Tai a “sociopath”. When Jackie hears about the fight, she puts an end to it and gets everyone on the team to say nice things about each other, which brings the overall excitement down a bit.

Jeff drives Jackie and Shauna home and hands over her boyfriend first so she can make her curfew. Afterwards, Shauna asks him to pull over to the side of the road where they start kissing. “I thought we did not do this again,” he says. “Was not. Again,” she replies. Then they have sex. When Shauna comes home, we see that she has been accepted at Brown University – even though she seems to keep this information secret. 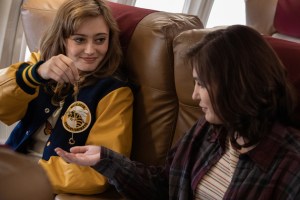 The next morning, all the girls board a private jet for the championship, paid for by Lottie’s father. The team coach and his two sons are there, as are all the girls. Jackie passes a very nervous Shauna some Valium to ease her anxiety about the flight, and then lets her borrow her gold necklace – the same one we saw the girl wearing in the desert at the beginning of the episode. “It’s basically a stroke of luck,” Jackie says. “Now nothing can touch you.” Over the intercom, the pilot announces that due to the weather, they will fly further north than usual, over the Canadian Rockies.

Shauna falls asleep but is pulled awake as the plane is in danger. Coach puts an oxygen mask on her; next to her, Jackie has fainted. Everything rattles and shakes, and girls are flung around the cabin as the plane goes down. A dazed Shauna pulls up his window screen just in time to see the plane by plowing into some trees.

MEET THE NEW BOSS | In a continuation of the scene from the beginning of the lesson, several masked and furry people shake some meeting and serve it to another figure wearing antlers – maybe this is the leader? That figure nods and everyone else snatches bits of the sitting. OH GOOD GOD, THEY EAT THE NIGHT DRESS GIRL, did not they? (Side note: Did you get a good look at the girl in the bloody montage? Is Jackie? I had a hard time saying that.) The manager then takes off his mask and puts on his glasses: It’s equipment manager Misty.

ALL ADULTS | For convenience, I have gathered all the flashbacks and all of today’s scenes together; the show, though ping-pong between the two. Adult Shauna (Lynskey) is a bored wife and mother who does not respond kindly when a woman claims to be a journalist from That Star book newspaper comes to the house and will talk to her about the incident all those years ago. “The plane crashed. A bunch of my friends died. The rest of us starved and scurried and prayed for 19 months until they finally found us, and that’s the end of the story,” she says. The reporter says she can guarantee Shauna a seven-figure book advance and they can write the book together.Shauna answers bluntly that she has not talked to any of the other survivors for years.

Later, when she is frustrated that her teenage daughter did not thaw any meat for dinner, Shauna kills a rabbit in her garden with a spade. (!) We also see that Jeff – also known as Jackie’s girlfriend from a long time ago – is now Shauna’s husband. Towards the end of the hour, Shauna takes a burner phone and some other things out of a safe, and then calls and says only, “We need to talk.”

It turns out that she comes in contact with Tai (Cypress), who is running for state senator. As we catch up with adults Tai, she is photographed – along with her wife, little son and dog – for a profile in Jersey monthly. “You’re the queer Kamala,” the photographer says adoringly, and of course comes the crash. But Tai insists she will focus on the future, “not my past.” 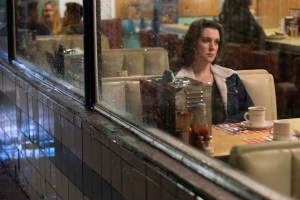 Funny, because it’s Tai who meets Shauna in a dining room one evening. They talk about how Natalie is in rehab, “and there’s still no sign of the others,” whatever that means. Shauna suspects the reporter is not who she says she is. “We agreed: say no more than we should, stay away from the public,” she reminds Tai. “As long as no one is doing anything crazy, we have nothing to worry about.” But if someone starts digging, “we’re all f-sorry.” OKAY, Yellowjackets, you hooked me!

Elsewhere, Natalie (Lewis) is actually completing rehab, but even her peers in group therapy do not know what happened to her all those years ago. “After they saved us, I lost my purpose,” is all she wants to say. “And thanks to my time here, I finally know how to get it back.” And then, once she’s out, she makes a plane for a warehouse, where she’s stored a car and a rifle, among other things. She tells the facility’s curious manager that she plans to “reconnect with some old friends.” 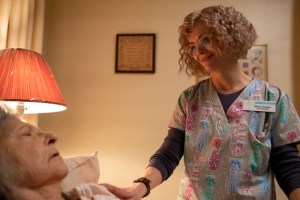 Before the episode ends, we catch up with another survivor: Misty (Ricci), who is a nursing home assistant. She seems sweet as a post … until one of the residents comes across an accident in bed and turns over her lunch box as Misty is unhappy. So Misty takes the woman’s morphine away as punishment, and throws a random: “Don’t fuck with me.” (!)

Now it’s your turn. What did you think of the premiere? Rate it via the poll below, then tap the comments with your thoughts!