REASON: In a house where all the family members are given a magical power, a girl without one sets out to find out what happens to their house when the magic seems to disappear.

REVIEW: The good news about the new Disney-animated musical Charm is that anyone who has been on board the study’s hit train for the last ten years (Complicated, Frozen, Moanaetc.) will almost certainly only go from there with good vibes coming the credits. The songs (here written by Lin-Manuel Miranda) are incredibly catchy; the animation is once again amazing and bar-raising; you can count on all sorts of crooked side characters and animal beings to steal the show with a big dose of laughter and; of course, you can expect your heartstrings to get a gentle jerk. Basically, this movie with a magical house that gives magical powers to a magical family does everything the folks at Magic Kingdom have fine-tuned for years – and if that’s all you could ever need from a movie like this, so I will say that your plans are sealed.

I can usually count myself in that class. The strange thing, though, is that despite all the fixins made to near perfection for this latest color burst from Disney, I still can not shake the feeling of mild disappointment after watching Charm. That is not to say that this is a rare bad movie from this quadrant of the House of Mouse. Like I said, there is simply too much done reliably right for it to be classified as bad, or even completely mediocre. But by bringing to life the story of the magical Madrigal family – whose members at a certain age are given special powers by a magical light that also powers their house – this is truly one of the rare Disney animated films that feels like the has put too much on the plate. The result is an admittedly entertaining film that does by far most of what it goes for, quite well, all the while the special elements feel locked in and only leave the more superficial elements as the really (very) clear stars.

The focus of the film is on Mirabel Madrigal (Stephanie Beatriz), who is the only member of her family who was not given a special power, such as her sister Luisa (Jessica Darrow), who has super strength, or her other sister Isabela ( Diane Guerrero), which is “perfect” and makes flowers bloom. Despite the fact that the family does not give Mirabel the same kind of respect as other members of the family, Mirabel still loves them very much. She even loves Abuela Alma (María Cecilia Botero), who can hardly help but seem very obviously disappointed in Mirabel, and who can also not fail to act as a cult leader who inspires affection from both her family and the urban population, who has built a community at the bottom of the magical house that basks in the glow of the magical family.

Right from the start, there are some strange dynamics going on with this family that I may feel I am digging too deep into, but also in a way not enough. Mirabel really loves her family (as expressed in the film’s opening track, where Beatriz gets to spit out some of Miranda’s quick lyrics), even though she seems a bit outcast in it. But she is so dedicated to them and keeps her family safe that when mysterious cracks begin to appear in the house – and Luisa begins to lose her powers – she sets out to investigate the dangers.

On a visual level, Mirabel’s journey does not lead her across the oceans like Moana or across an entire continent like Raya in Raya and the last dragon, but instead her incredibly gifted house. The house can rearrange its foundations to create unlimited potential, like bedrooms tailored to the family to match their powers – like a whole rainforest for the young Antonio (Ravi-Cabot Conyers) who can talk to animals. Walking around the house with Mirabel is always dazzling, with new corners and mysteries that make the house feel infinitely alive and worthy of exploring every nook and cranny.

The further Mirabel goes in uncovering the reason why the magic seems to disappear from the house – which includes exploring the story of her missing uncle Bruno (John Leguizamo) – the more and more it becomes very clear that this is a story about the importance of high family expectations and inheritance, and how they can actually do more to prevent families than to let them thrive. The strongest explorations of this are through the music, such as Luisa’s hard-hitting “Surface Pressure”, the salsa vibe involving a large part of the family, “We Don’t Talk About Bruno” and Isabela’s “What Else Can I Do?” But maybe more amazing than the music is the animated choreography attached to it.Like the house when it turns its tiles or adjusts its staircase, the characters move with incredible dexterity and liveliness.Especially with “We Don’t Talk About Bruno” the mix of Animation of music a kaleidoscope of rhythm and colors that finds the animators at the top of their game.

Along with the visual and musical arrangement (score performed by Germaine Franco), the songs also do much of the heavy lifting in the character department. Family members do not get all these meaningful conversation moments to give their grades concretized. But bringing everyone together into one song gives them all a chance to be concretized, each with their own worries, fears, and desires. I was really grateful for this at the end, as the script from Jared Bush (who also directed with Byron Howard) and Charise Castro Smith (who also gets a sideco director credit) does not offer much. So much of Mirabel’s journey across the house is narratively too thin to be engaging without the amazing images and music, and with none of them on screen, I found myself easily uninvolved in what was going on.

Much of it has to do with the reality that even though family members get a chance to sing, be around and make some jokes, they are not all equal in the story – with some members like Mirabel’s mother and father (Angie Cepeda, Wilmer Valderrama) simply feels “there”. It is also difficult to find the danger of breaking down when the effects on the family are not consistent. Luisa is losing her strength, but everyone seems to be fine. Mirabel’s aunt Pepa (Carolina Gaitán) is still able to control the weather around her with her emotions, and Mirabel’s cousin Dolores (Adassa) still has her super hearing (and thus knows everyone’s case). Mirabel’s investigation around the house may bring her into contact with these members of the family, but all the bouncing around and the forces being displayed just mask the fact that nothing that happens under all the charm is terribly interesting. And with so many family members juggling the story, they can be put in the background until they might get a chance to express how magical they are, life is not as magical for them as they would like.

Unfortunately, the same goes for Mirabel herself. She is a solid protagonist that young viewers can relate to, where the love of her family is her superpower. And Beatriz is a charming main voice, a role that allows her to show off her vocal skills and humor rather than bring out Mirabel’s almost unbreakable mood. However, it is easy for her to feel put on the sidelines by the rest of her family as her study gives her insight into their dynamics. She’s completely fun to be with across her adventures, but she can not help but feel like a galleon character meant to mix between more interesting characters and scenery. This even applies to her conflict with her grandmother, where they only get one real scene before the expected, heartfelt finale to really explore their dynamics. Everything just feels like touching bases, and no matter how beautiful and entertaining it all is, no matter what the real depth of the story is, it is either lost or simply slipped over. In the end, it can not help but dampen the emotional impact a little. While the animators did a fantastic job with the last minute, where Abuela Alma goes into detail about the loss of her husband, the relationship between Mirabel and her just did not have the development behind it to make their moment have even more power than pictures and music giving it.

But again, maybe a complex study of admittedly toxic family dynamics is not your cup of tea. Maybe the magic and the music and yucks are all you need for a good time with the family. Even better, maybe just seeing a big family like this be there on screen is an added bonus. And on that note, Encanto really delivers. It’s a great, fun, sensory gift of an adventure with an amazing cast and infinitely impressive animation. But so much running around and putting pieces to get to means family members only get just enough to feel like characters, and then be referred to the back of comedy feed, if ever at all. Charm is undoubtedly magical, but with a story that plays it safe in the comfort of the Disney machine, it is not quite magical enough to always match its dizzying heights. 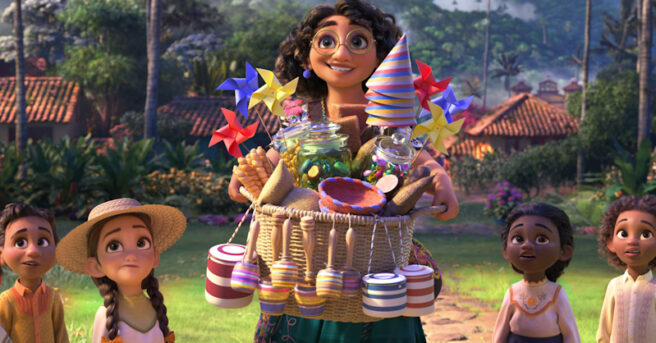