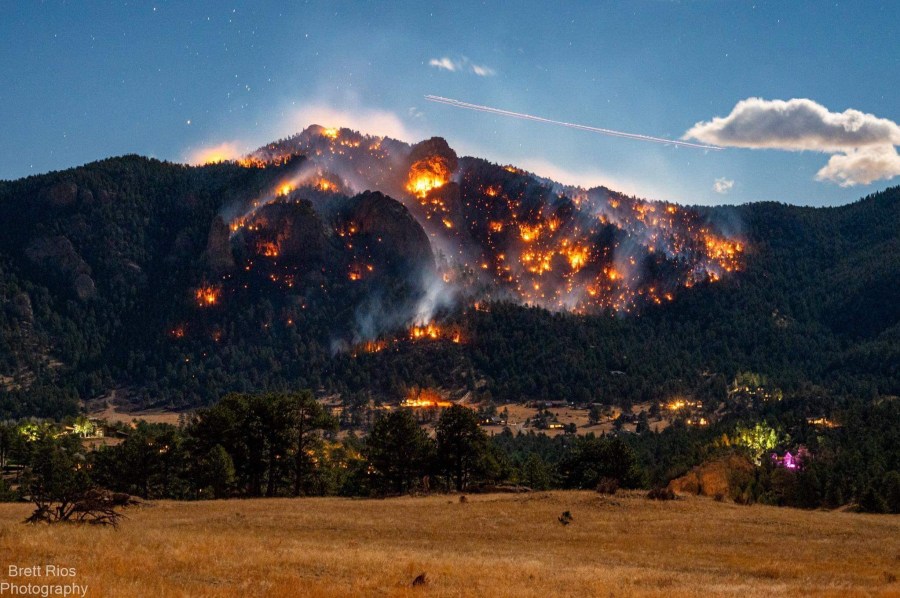 ESTES PARK, Colo. (KDVR) – An Estes Park photographer shares some of the last photos likely taken before an air tanker crashed outside Estes Park on Tuesday.

Brett Rios has been photographing forest fires in Colorado for the past decade and set up on a prospect to catch the Kruger Rock fire Tuesday night.

“Just as I composed it, just above the ridge, comes the air tanker,” Rios recalled. “He just made tight circles, and then he had come out and moved himself to a nice long run, and then at the last second he just dived and ran in.”

Rios said he was surprised to see the plane in the air, given the winds he fought against the ground to keep his shot stable.

He said nothing seemed out of the ordinary with the plane before it turned into the back of Kruger Rock.

“So I go to get that long exposure, and this big gust of wind pushes me, and I stop clicking the button,” Rios said. “Two or three seconds later, the whole sky behind Kruger Rock lit up. It was just that bright glimpse I’ve never seen before.”

Rios listened to his scanner at the time and quickly realized what had happened.

“There was no smoke, there was nothing to indicate that anything was going on in terms of poultry equipment,” he said. “In an instant, there was just this clear, bright light.”

Rios called the emergency dispatch several times and helped the sheriff’s office find out where he thought the plane had gone down.

“Bringing him home to his family is the most important thing,” he said.

Rios said he could not bring himself to look at the pictures until early Wednesday morning when he realized what he had captured.

“So then I started going through them and you have this double sword where you see this beautiful picture, but it’s also only moments before this person perished,” he said. “I’ve never caught anything like it before, and it’s pretty powerful, there’s a lot of emotion in it.”