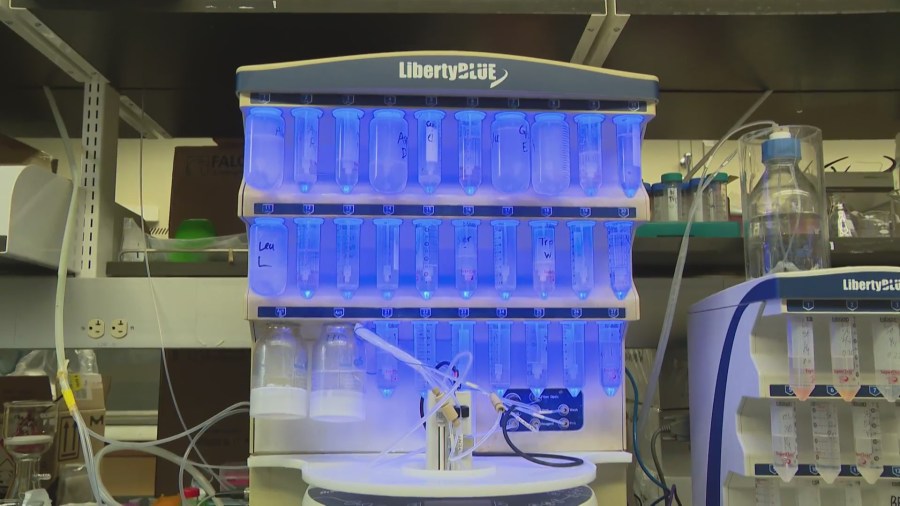 There is a new approach to repairing spinal cord injuries that doctors say is a true breakthrough. Accident and gunshot victims as well as people with neuromuscular diseases and even strokes can all benefit from it.

Dramatic images show a mouse pulling at its paralyzed hind legs. So after the treatment, the mouse is able to use the small limbs to hold the weight and walk.

New twist on a treatment for bone deformities

Mark Karver is the director of the Peptide Synthesis Core facility.

He said the blue microwave-assisted peptide synthesizer “produces or synthesizes the nanomaterials we used in this work.”

The nanomaterials are speeded up with the machine. And speed matters when it comes to repair.

It was absolutely exciting for me as a scientist to see how well this therapy worked. And to realize that we discovered a completely unknown phenomenon, namely the effect of the motion of all these thousands of molecules that move together and try to signal receptors.

“It is interesting that as the molecules move, the mouse moves and moves. When the molecules did not move that much, we could see that the repair was not so good, “Stupp said.

It works with a single injection targeting the area under the injury to restore spinal cord function. In the laboratory, it was given to mice with simulated spinal cord trauma.

“Upon contact with the living tissue with the spinal cord, the fluid gels instantly and forms a network, a network of small fibers that carry signals to the cells to begin regenerative and repair processes,” Stubb said. “By analyzing the spinal cord, we actually saw all the details of the things that were repaired … The axons, which are the electrical cables, regenerate, how blood vessels are reformed, how myelin, which is an insulating layer around these electrical cables, is reformed. And that we were also able to save many neurons after this very large force affected it on the spine. “

When cell receptors dance through the system, they are more easily noticed and engaged in service by the green and orange nanofibers, which contain two different bioactive signals that are essential for function.

“It’s designed to prevent paralysis after serious injury,” Stubb said. “But we are already working on adopting the exact same therapy for the chronic injury. It is to see if we can help patients who have already been paralyzed some time ago.”

Researchers are now gathering their data to apply for FDA approval of their approach. FDA regulators are likely to then ask for additional tests to verify the results.