We have so little information about the artists who decorated the tombs and temples of ancient Egypt, archaeologists call them “the great unknowns”.

Now, a decade-long study has shed light on their methods and revealed that they operated a workshop-style system much like those used by Raphael and Botticelli in the Renaissance thousands of years later.

The study focused on the Hatshepsut Temple on the west bank of the Nile, which was dedicated to the female pharaoh who ruled from 1473 to 1458 BC. 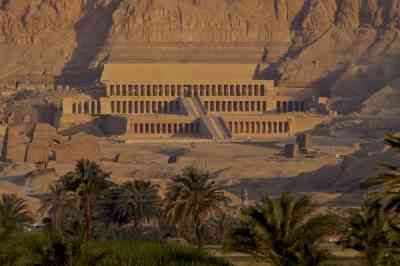 The Hatshepsut Temple, which contains the ancient works of art

Its largest room, the Hatshepsut Chapel, has two reliefs carved out of sandstone, each 13 m long and 4 m high. They depict a procession of 200 figures bringing sacrificial offerings – wheat slices, baskets of birds and other things – to the pharaoh,