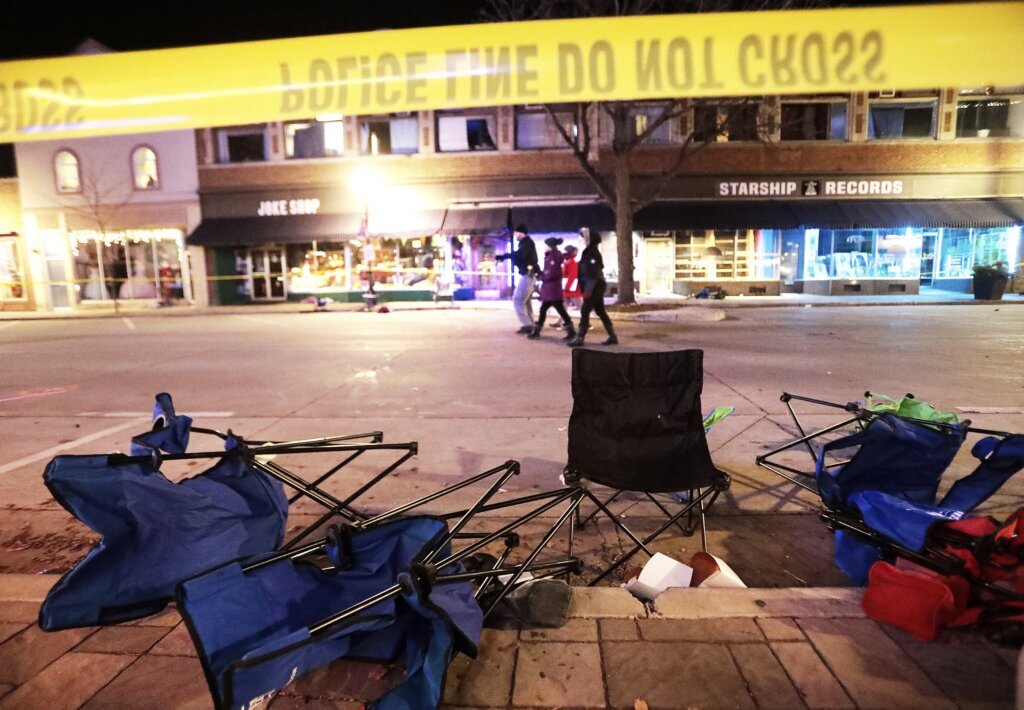 WAUKESHA, Wis. (AP) – A merry scene with marching bands and children dancing in Santa hats and waving pompoms that were …

WAUKESHA, Wis. (AP) – A merry scene with marching bands and children dancing in Santa hats and waving pompoms became deadly in an instant as an SUV drove through a barricade and into a Christmas parade in the Milwaukee suburb while spectators watched in horror.

A video showed a woman screaming, “Oh my God!” repeatedly when a group of young dancers were hit on Sunday. One father talked about going “from one crumpled body to the other” in search of his daughter. Members of a “Dancing Grannies” club were among those affected.

Police said “some” people died in the incident in downtown Waukesha shortly before noon. 17.00, but would not say how many, citing the need to notify relatives. At least 23 people with injuries were taken to hospitals.

A “person of interest” was remanded in custody, Waukesha Police Chief Dan Thompson said, but he gave no details about the person or a possible motive. The investigation was underway with the assistance of Wisconsin’s Department of Justice.

“What happened in Waukesha today is nauseating, and I have full confidence that those responsible will be brought to justice,” tweeted State Attorney Josh Kaul, the state’s top law enforcement official.

The horror was captured by the city’s livestream and the spectators’ mobile phones. A video shows the moment the SUV broke through the barricades, and the sound of what appears to be multiple shots. Thompson said a Waukesha police officer fired his gun to try to stop the vehicle. No spectators were injured by the shot, and Thompson said he did not know if the driver was hit by the officer’s bullets.

Fire Chief Steven Howard said 11 adults and 12 children were transported to hospitals by his ward. It was unknown how many people were taken to hospitals by others. The Children’s Hospital of Wisconsin said it received 15 patients from the parade and no deaths were reported.

A video shows a small child dancing on the street while the SUV whizzes by, just a few meters from her, before it whizzes into parade participants a few hundred meters in front. Another, of dancers with pompoms, ends with a group of people caring for a girl on the ground.

‘There were pompoms and shoes and spilled hot chocolate everywhere. “I had to walk from one crumpled body to another to find my daughter,” Corey Montiho, a Waukesha school district board member, told the Milwaukee Journal Sentinel. ‘My wife and two daughters were almost hit. Please pray for everyone. Please pray. ”

The Milwaukee Dancing Grannies wrote on its Facebook page that “members of the group and volunteers were affected and we are awaiting notification of their relationship.” The group’s profile describes them as a “group of grandmothers who meet once a week to practice summer and winter parades.”

A Catholic priest, several parishioners and Catholic schoolchildren in Waukesha were among those injured, said spokeswoman for the Archdiocese of Milwaukee, Sandra Peterson.

Chris Germain, co-owner of the Aspire Dance Center studio, had about 70 people in the parade, ranging from as young as 2 were pulled in carriages to the age of 18. Germain, whose 3-year-old daughter was in the parade, said he was driving in front of their driveway when he saw a reddish-brown SUV “just crashing right past us.” A police officer ran past in the chase. Germain said he jumped out of his own SUV and gathered the girls who were with him to safety.

Then he went forward to see the damage.

“There were little kids lying across the road, there were police officers and EMTs doing CPR on several members of the parade,” he said.

Angelito Tenorio, a councilor from West Allis who is running as treasurer in Wisconsin, said he saw the parade with his family when they saw the SUV come rushing into the area.

“Then we heard a loud bang,” Tenorio said. “And after that, we just heard deafening cries and screams from the crowd, from the people at the parade. And people started hurrying, ran away with tears in their eyes and cried.”

The Waukesha school district canceled classes on Monday, saying in a statement on its website that additional counselors would be present for students and staff. The parade’s list of enrollments included cheers, dancing and band performances associated with district schools.

Governor Tony Evers said he and his wife, Kathy, “prayed for Waukesha tonight and all the children, families and community members affected by this senseless act.”

The parade, held each year on the Sunday before Thanksgiving, is sponsored by the City Chamber of Commerce. This year, the 59th, had the theme “comfort and joy.”

Waukesha is a western suburb of Milwaukee and about 90 kilometers north of Kenosha, where Kyle Rittenhouse was acquitted on Friday of charges stemming from the shooting of three men during riots in that city in August 2020.