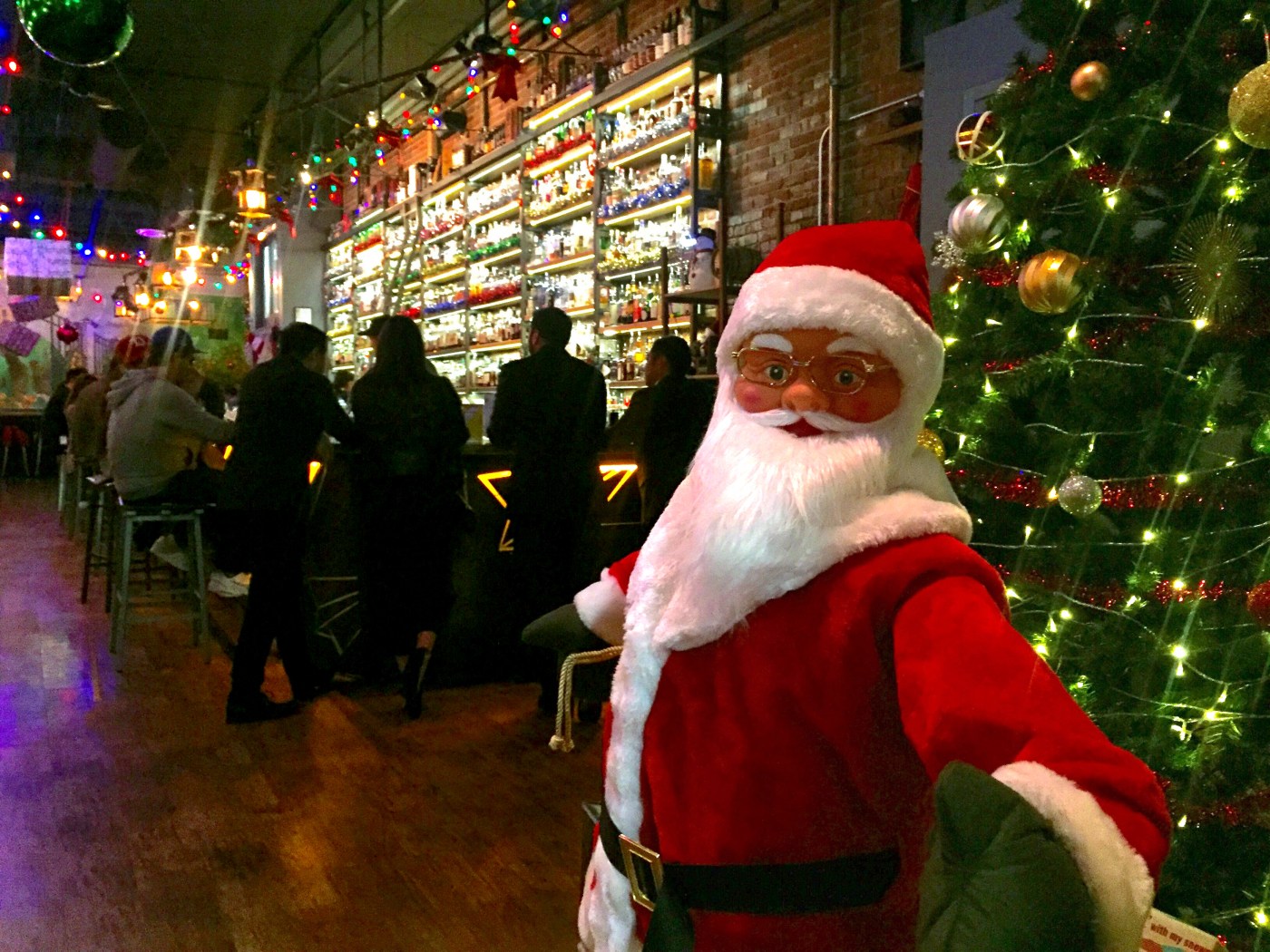 It’s starting to look like Christmas again on Paper Plane in downtown San Jose. After being forced to take a break last year due to the COVID-19 pandemic, the popular lounge is once again transformed into Miracle on 1st – a winter wonderland for the craft cocktail crowd.

The bar at 72 S. First St. was decorated this week in preparation for Wednesday night’s grand opening, with enough festive wrapping paper and decorations to make Kris Kringle feel at home. The drinks menu also gets a Santa makeover, with several “Miracle on 1st” favorites returning as Christmopolitan, Snowball Old-Fashioned (who will have a gingerbread flavor this year); the Bad Santa, a spicy version of Hot Buttered Rome; and SanTaRex, a tequila-mezcal concocted served in a mug in the shape of a dinosaur wearing a Santa hat.

But the really fun addition this year is that 55 South, another hotspot for craft cocktails in downtown San Jose, will be one of the Sippin ‘Santa bars for the season when it also opens Wednesday night. The relaxed holiday atmosphere and menu is a mix of tiki and holiday culture – think of it as celebrating Christmas in Tahiti. The drinks are mostly rum-based, including Kris Kringle Colada and Sippin ‘Santa itself, but there are a few exceptions like the tequila-powered Azul Navidad and Yule Log Grog, a hot drink made with gin and cranberry syrup.

The “Miracle” concept was started by Greg Boehm in New York in 2014, and Jeff “Beachbum” Berry got involved a year later to bring the tropical “Sippin ‘Santa” offshoot. Most of the drinks come in festive glass, which is also for sale, and part of the proceeds are donated to the James Beard Foundation’s Open for Good campaign to provide restaurant assistance. There are also “Miracle” bars in Pacific Cocktail Haven in San Francisco and Double Standard in Oakland and a “Sippin ‘Santa” at Kona Street Market in San Francisco.

The renewals last until December 31st, so you have plenty of time to try them out. And with the two downtown San Jose bars, they are just steps away on South First Street, so you do not even have to take a ride on Santa’s sleigh to visit both in one night (though I would definitely recommend grabbing in a ride-share or appoint a driver).

MINGLE AND JINGLE: Families driving past the Plaza de Cesar Chavez in downtown San Jose may have noticed what looks like a bouncy castle in the middle of Christmas in the park. Sorry to disappoint the kids, but the inflatable structure is Blinky’s Tavern, and it’s for adults only.

The 1,700-square-foot “cabin” weighs more than 500 lbs. and it sounds like we are lucky that it arrived on time. After arriving in port from Asia, customs officials reportedly wanted it to be inflated to its full 40-foot by 60-foot size to see what it was. Blinky’s Tavern, which opens with Christmas in the Park November 26, will be closed Mondays and Tuesdays. Another interesting thing to note is that it is staffed by Scholar Wine, a Bay Area bar and catering service – started by Santa Clara University students in 2014 – that provides scholarships to low-income first-generation students.

Christmas in the Parks CEO Jason Minsky said he wanted to try bringing a beer and wine venue to the park for a while and teamed up with Bottomley Distributing to make it happen. It could be a great way to draw young adults to the beloved San Jose vacation show, which is usually visited by people when they are children, and then again when they themselves have children (or grandchildren). Beer and wine cost $ 12, but with the former Fairmont Hotel across the street from the park still closed through the holiday season, it might just be the ticket.

GOOD TIMES FROM SUNNYVALE: Kristi Yamaguchi helped open Downtown Ice, the San Jose ice rink that bears her name, Monday night, but it’s not the only outdoor ice rink in South Bay. The Downtown Sunnyvale Ice Rink on Murphy Avenue also opened last weekend with performances by the San Francisco Ice Theater and former Team USA member Angela Wang. More than 30 children who are customers of Sunnyvale Community Services, the event’s nonprofit partner, also came to skate and – thanks to an anonymous donor – each received a $ 25 gift card to Leigh’s Favorite Books.

That’s not all, Sunnyvale Community Services is grateful for this season either. CEO Marie Bernard says the agency is pleased to finally be in its new facility this month after nearly two years of renovations and fundraising during the COVID-19 pandemic. The new building triples the space of the old facility and is large enough to have staff safe on site welcoming customers and volunteers, Bernard said. So far, the nonprofit has raised $ 17 million for its $ 20 million capital campaign and is working hard to bridge the gap.