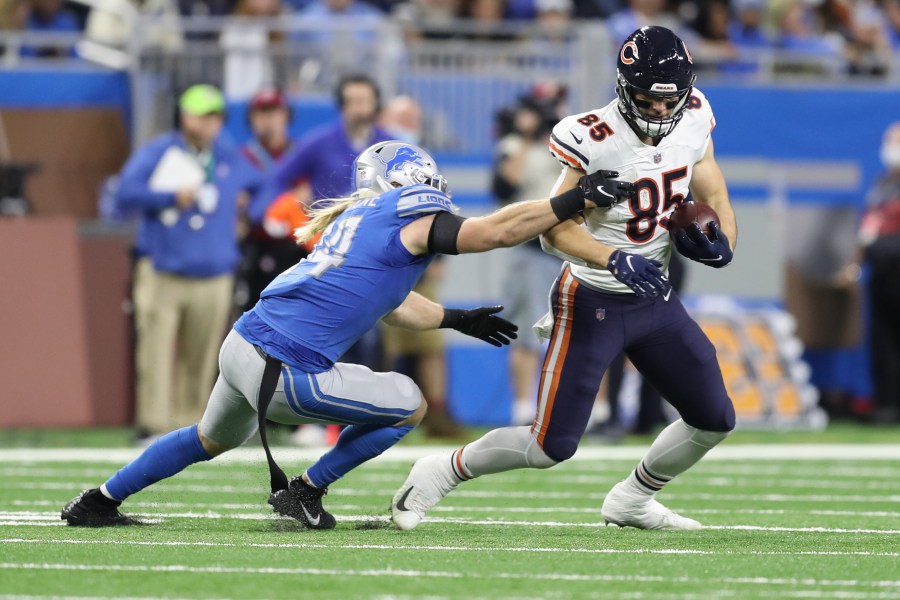 DETROIT – The Bears ended their five-game losing streak with a late field goal against the Lions, beating Detroit 16-14.

Cairo Santos hit a 28-yard field goal as time ran out to give Chicago the win.

After a dud of an opening drive, Jared Goff teamed up with Josh Reynolds on a 39-yard touchdown pass to make it 7-0 early.

The Bears came on the board for the first time as they had to settle for a field goal to 7-3 with 13:27 left in the second quarter.

The defense got the ball back to allow Dalton to connect with Darnell Mooney for a 52-yard bomb. Already the next game, Dalton threw the 17 yards up the seam to Jimmy Graham for the Bears’ first touchdown of the day.

The positive second quarter for the Bears continued as they rediscovered a Jared Goff fumble on a sack of Robert Quinn – which darkened 10 sacks this season. The Bears, however, were unable to capitalize when Andy Dalton threw an interception in the end zone.

The Bears ‘defense continued to hold high throughout the first half, making a Cairo Santos’ field goal 13-7 as time ran out.

The Bears forced a Detroit three-and-out before a costly team penalty put a Cairo Santos missed field goal with 8:43 left in the third.

The Lions finally got a drive together at the end of the third and utilized a 17-yard Jared Goff touchdown pass to tight-end TJ Hockenson – who gave the lead back to Detriot.

After not a lot of offense in the fourth quarter, the Bears were able to take the lead, thanks to Detroit being marked too late to take back to back penalties. Cairo Santos was able to score an easy field goal as time went on, to give the Bears a 16-14 victory.

The victory ends a hectic and confusing week in Halas Hall. Earlier this week, a report from a Patch reporter said head coach Matt Nagy would be fired after Thursday’s game. This triggered a firestorm, which led to reports of Bears chairman George McCaskey personally telling players the report was not true.

The Bears look set to go 5-7 next week at home against the Cardinals.