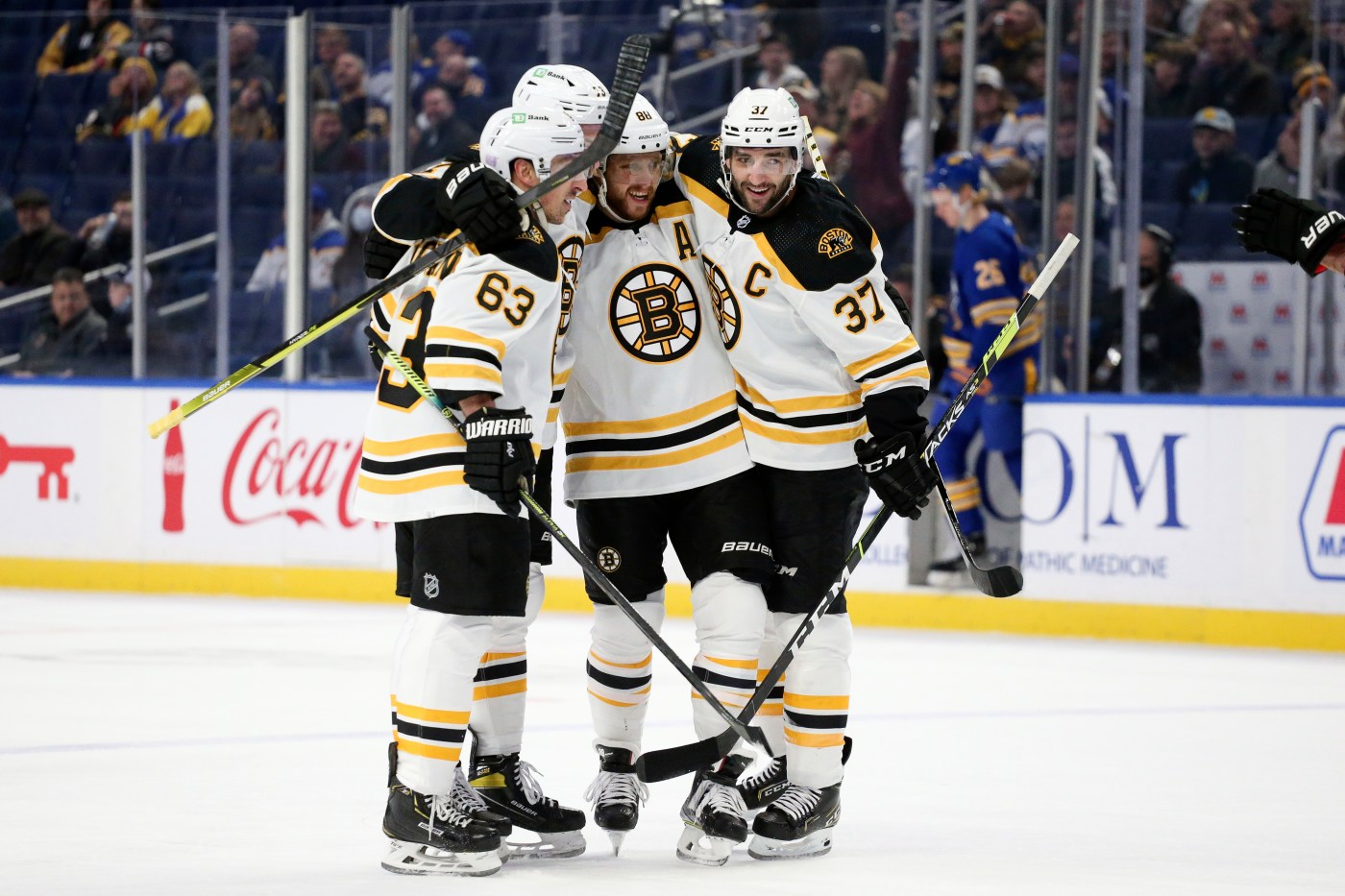 The Bruins did not arrive at Buffalo with any longer losing streak on their backs, but the way they lost to the Calgary Flames last Sunday required some sort of reaction.

Luckily for the Bs, the Sabers were on the Thanksgiving Eve menu.

The piece by the stingy Flames in the shutout loss on Sunday, the Bs were linked with an early knockout blow to the Porous Sabers (17 goals against in their previous three games) and crossed to a 5-1 win at KeyBank Center.

The Bs scored goals from five different players and collected both power plays in the victory. Jeremy Swayman (24 saves, including one on penalty kick) also came back from Sunday’s loss with the win on his 23rd birthday, and got started after the planned starter Linus Ullmark adjusted something in the morning skate.

The only negative is the loss of Charlie McAvoy late in the game, although the first news of him was promising. McAvoy played the puck along the boards in his own zone as he took a stroke from behind by Zemgus Girgensons, crashing into the boards with his head taking the head off the stroke of the dasher.

McAvoy would eventually leave his own power while holding a towel to his forehead, and the Girgensons were given a five-minute major and the gate.

Coach Bruce Cassidy, who did not blame the Girgensons on the blow, said McAvoy got a gash that required stitches, but he was up and moving well around.

“Let’s hope he’s waking up – knocking on the tree – healthy, feeling well, having some turkey (on Thursday) and ready to go on Friday,” Cassidy said, adding that McAvoy’s late ride may have contributed to the awkwardness of the hit.

The result had long been decided before the hit.

The Bruins took control of the game with four goals in a row at 5:31 in the first period to go into the first break with a 4-1 lead.

But for a few short minutes, it looked like the Bs were going to have one of those nights they would regret. David Pastrnak had a 2-on-1 with Brad Marchand, he chose to shoot and goalkeeper Aaron Dell came with the save. The Sabers then went straight back down the ice, and Kyle Okposo struck Swayman with a short-range shot that looked like a Swayman would have wanted back.

Apparently the Bs did not like the taste of their own blood.

Captain Patrice Bergeron made the ball roll. After throwing a targeted shot into the net from the left wing, his linemates kicked around the riposte until Bergeron came down and backhanded the loose puck over the inclined Dell at 13:29.

Charlie Coyle then gave the Bs the lead 51 seconds later when he rejected an Sabers rim attempt on the right boards, jerked to the net and hit Dell with an absolute snipe under the crossbar. It was Coyle’s sixth this year, which equates to his total from all of last season.

After drawing a hooking penalty, Pastrnak increased the lead with a power-play goal of 16:59, and it was the kind of goal that had become the winger’s bread and butter, but one we have not seen much of this year. Parked in the left circle, Pastrnak disposable McAvoys feed, it blew past the helpless Dell.

Mike Reilly finished the first period scoring with his second goal of the season. Nick Foligno tipped a Jakub Zboril shot, which produced a big rebound that Reilly could topple over and put it into the open net at 7 p.m.

Dell ended the period, but he would happily be replaced by Dustin Tokarksi in the second. The Bs outscored them 22-8 in the first.

The manuscript was reversed in the second period, in pretty much all categories, but they scored goals. And it was Swayman’s turn to pay his teammates back. It started with some seriously sloppy play by the Bs. Within a few minutes, both Pastrnak and Craig Smith made hefty turnovers just within their own blue line, but they did not result in any Buffalo numbers.

Later, John Hadyn came halfway through Derek Forbort and the Bruins defender hauled him down at 9:22. Hadyn got a penalty kick – an aggressive call from the referee, to be sure – but it may have worked better for the Bs that the easy-scoring Hadyn (13 goals in 200 NHL games) got the free throw. Swayman calmly observed Hadyn’s elaborate approach and easily rejected his offer.

It seemed to wake up the Bs, who played better the rest of the way during the period to maintain their three-goal lead.

The Sabers did not get their first shot on goal in the third period until after the halfway mark, where the final score was clearly determined. Taylor Hall finished the scoring with a powerplay goal under Girgensons’ major.