Eric Zemmour, the anti-immigration polemicist, has declared his bid for the French presidency with an appeal to those he said were despised by elites and felt like strangers in their own country.

“You feel displaced… You have the impression of no longer living in the country you know,” he said on Tuesday in a YouTube video that included clips showing black residents of France and scenes of violent street demonstrations. ” It is no longer time to reform France, but to save it. “

As Zemmour read from a manuscript at a desk in front of shelves of leather-bound books, Zemmour said, “This country you care about is disappearing… Immigration is not the source of all our problems, but it exacerbates them all.” He lamented France’s “third world creation” as well as “Islamo-leftism”, “decline” and “decadence”.

France will hold presidential elections next April, with President Emmanuel Macron seeking another term. The 63-year-old Zemmour was at one point in the fall number two in the polls only after Macron, without having declared himself a candidate.

The formal launch of his campaign comes as his popularity seems to be declining and following a disastrous visit last weekend in the Mediterranean port of Marseille.

He failed to attract supporters on the street there and returned gestures when a woman raised her middle finger towards him, prompting his political rivals to dismiss him as unworthy of the presidency. Zemmour said his reaction was “very elegant”.

Although his opposition to non-European immigrants and Muslims places him on the right even of his right-wing extremist rival Marine Le Pen and her Rassemblement National party, Zemmour has also attracted the support of conservative voters who would normally vote for the center-right.

His relentless focus on immigration has helped set the French political agenda and shift the debate sharply to the right, while candidates are vying for a seat ahead of the presidential vote and the legislative election that follows in June. 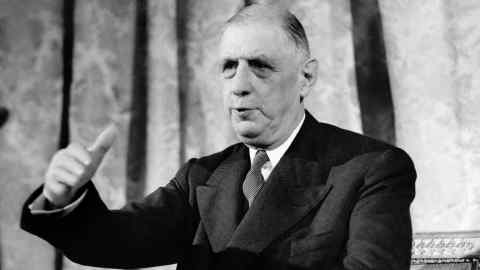 Members of the center-right party Les Républicains are to vote for their own candidate this week, and even former moderate LR hopes like Michel Barnier, the EU’s former Brexit negotiator, have sharpened their rhetoric against migration.

The left-wing parties that were once prominent in French politics have almost disappeared from view in the first weeks of the campaign, when the socialist candidate Anne Hidalgo, the mayor of Paris, achieved almost 5 percent of the intentions to vote in the first round. It leaves her under Jean-Luc Mélenchon from the far left La France Insoumise (France Unbowed) and under Yannick Jadot from the Greens.

Zemmour’s statement was imbued with nostalgia for the France of the past. The French, he said, remembered “the land of Jeanne d’Arc and Louis XIV, the land of Bonaparte and General de Gaulle, the land of the knights and nobles, the land of Victor Hugo and Chateaubriand, the land of Pascals and Descartes”.

Jean-François Mbaye, a Member of Parliament for Macron’s center party La République en Marche, accused Zemmour of “abe de Gaulle, who must turn in his grave, with a mediocre and pitiful appeal”, while France wanted to look to the future.

Fabien Roussel, the Communist Party’s candidate, said “hatred is his profession and controversy his goal”, while Mélenchon’s campaign manager Manuel Bompard mocked Zemmour’s nostalgia and asked on Twitter: “It seems that Zemmour has just declared himself a candidate for the 1965 presidential election?”