Share
ASBURY PARK, New Jersey – It has been called beautiful, stunning and glorious, a transcendent work of art that recreates the holiday experience with local touches of the Jersey Shore.

It has also been called ridiculous, ugly and hideous, something resembling a pile of Amazon mailboxes or a giant cat scratching post.

But this year, instead, there is art made of cardboard in the shape of a tree that also incorporates elements from the coast, the city’s architecture and its rich musical heritage, which especially includes Bruce Springsteen. It is designed to be recycled after it is disassembled.

“I like that it’s different,” Chris Trifari said of neighbor Neptune as he strolled by the tree. “It’s pretty interesting.”

“I think it’s very creative,” said Asbury Park resident Elizabeth Khimitch, who brought her two dogs to be photographed in front of the display. “It suits the Asbury vibe, which is different and unusual.”

Others were not so grateful.

“It looks like an Amazon package,” said Anthony Solimando, a former resident of nearby Neptune City who recently moved to Hoboken.

“Not a fan,” added Amy Mackey, who lives near Asbury Park. “Asbury has adapted to this artistic city, but tradition is tradition! This is art, and I would not take my child’s picture in front of this tree. Can’t we just have our traditional tree?”

“No lights?” said Zuzanna Humeniuk of Wall. “It’s creative, but not festive at all.” 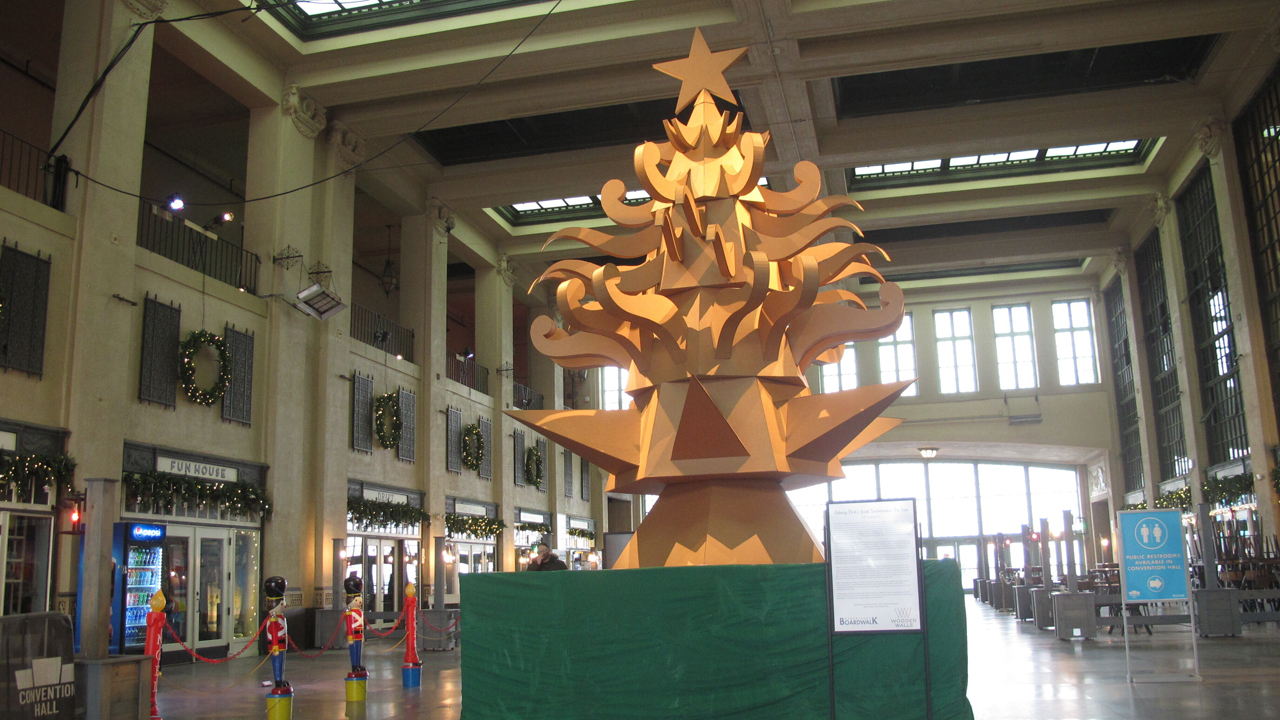 The change came this year when the city’s art community approached Madison Marquette, the private owner and manager of the Asbury Park promenade, to create a Christmas tree sculpture for the Convention Hall, according to Austin Leopold, the boardwalk property manager.

“Because the boardwalk is a focal point for Asbury Park’s thriving arts and music community, and because we have a long and very strong relationship with local artists with top names when we were introduced to the concept of the sculpture, we embraced the idea passionately,” Leopold said.

Michael Lavallee, a local artist who goes by the name Porkchop and whose work has been shown throughout the United States and Europe, co-created the work with Brad Hoffer. They call it “The Giving Tree”.

He said the company told him there would be no natural Christmas tree in the Convention Hall this year.

“I was asked to come in and do something festive,” said Porkchop, who studied in Virginia and Philadelphia. “It was not my intention to take anyone’s Christmas tree away. If you do not want to give people the big tree they want, some of them will hate it. I understand that. But they would not get the traditional Christmas tree anyway.”

The piece uses natural and artificial lighting to cast shadows on parts of the tree while illuminating others so that its appearance changes during the day.

Amy Quinn, deputy mayor of Asbury Park, said the city is not involved in the Convention Hall exhibit, but that she considers herself a fan. She notes that the city will hold a traditional outdoor tree lighting in a park on Friday.

“I love the attitude the local artists had on the tree,” she said. “I love that it’s different. Love it or hate it, people talk about it.”

Copyright © 2021 by The Associated Press. All rights reserved.