Putin told an investment forum on Tuesday that Moscow had developed hypersonic missiles and would be forced to respond “if NATO continues to expand its infrastructure,” including through the alliance’s potential deployment of its own similar missile systems.

“If some kind of attack system pops up on Ukraine’s territory, the flight time to Moscow will be seven to 10 minutes and five minutes in case a hypersonic weapon is deployed,” Putin told the online conference on Tuesday.

“Then we have to create something similar to the ones that threaten us. Can you imagine? And we can do that now, Putin added.

The United States has provided weapons to Ukraine and helped train its army, but has not deployed forces or equipment in the way Putin suggested. Yet the issue remains pressing for Putin, who claimed without proof last month that NATO could secretly set up bases and missile systems in Ukraine under the guise of the training program.

Washington has shared intelligence with allies, suggesting that Russia may be preparing for a return to direct hostilities in Ukraine after gathering as many as 114,000 troops to its north, east and south.

US Secretary of State Antony Blinken said ahead of a two-day NATO meeting with Latvian foreign ministers that a Russian attack “would have serious consequences”, while British Foreign Secretary Liz Truss said her country would use “all diplomatic and economic leverage” on our disposal ”to deter Russia from invading.

But Putin said Russia had been forced to defend itself against what he described as insidious NATO intervention since the collapse of the Soviet Union, including the placement of missile systems in Poland and Romania, which he said could be used to launch attacks on Moscow.

He also complained that NATO had carried out unplanned military exercises in the Black Sea this month, including the flight of strategic bombers capable of carrying nuclear weapons only 20 km from the Russian border.

In response, a new Russian hypersonic missile will come into use from the beginning of next year, Putin said. The missile, which can travel at nine times the speed of sound, was successfully tested this month, he added.

“The flight time will be five minutes for the people who place the orders [to attack Russia from Ukraine] also, “Putin said.” We had to create something similar to spend on those who threaten us in this way. “

The United States may deploy its first hypersonic weapons next year, a Pentagon official said earlier this month.

Kyiv has said that US intelligence services indicate a “high probability” that Russia is preparing an invasion following relations with Ukrainian President Volodymyr Zelensky, and that it is losing interest in peace talks led by France and Germany. 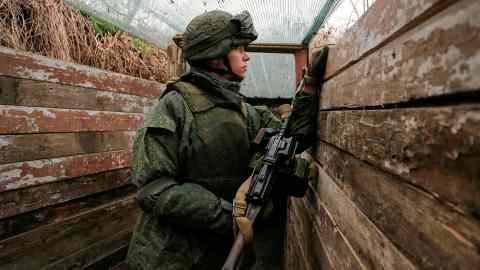 Russia annexed the Crimean peninsula from Ukraine following a pro-Western revolution in 2014, and then fueled a separatist uprising in the eastern Donbas region, killing more than 14,000 people.

Moscow denies being a party to the conflict, but has provided separatists with troops, equipment and logistical support, according to Western governments.

Ukraine’s Defense Minister Oleksii Reznikov on Tuesday suggested that Putin be engaged in brinkmanship to take over in any negotiations with US President Joe Biden on Ukraine and other issues.

Russia began troop building in April. Biden agreed to a summit held in Geneva in June, and Putin asked the troops to resign. But Russia left a significant number of troops and infrastructure near Ukraine and conducted large-scale joint exercises with Belarus at the border.

“The question is not whether to send troops in or not, or whether to go to war or not, but… To take into account the interests of all participants in international activities,” Putin said. “If we work towards this then no one’s safety will be threatened. “