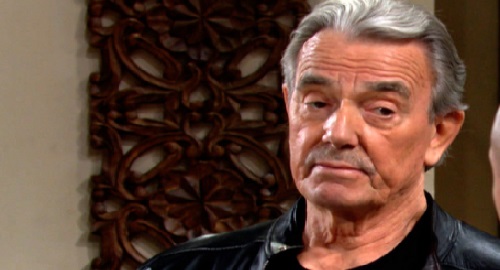 To begin with, Victor wants to make it clear that Billy is going down personally and professionally. He will decide it’s time to stop dealing with Billy with children’s gloves and will take a brave stand against him. It sounds like a major confrontation is on the way where Victor and Billy put it all out.

Victor planned to make Billy believe that they had accepted his offer, but he can eventually assume that Jill Abbott (Jess Walton) is still forcing Billy to resign. With that in mind, Victor can insist that there is no deal – though he will not mind so much if Victoria Newman-Locke (Amelia Heinle) defeats him in the war for ChancComm.

As long as Victoria’s motivation is about doing what’s best for Newman-Locke instead of protecting Billy, Victor will be OK with her bid for the company. His main goal will remain to crush Billy in every possible way, so he will take a more hostile approach to Wednesday’s Y&R section and pour salt into the wound.

Of course, that does not mean that Victor will just throw in the towel when it comes to acquiring ChancComm for Newman Media. Jill Abbott (Jess Walton) will hope to drive the price up through a good old-fashioned bidding war later this week, but she has something else to figure out first.

Jill offers to let Lily take over as the new boss of ChancComm on Tuesday, so Lily has a big decision to make on Wednesday’s show. Of course, Lily may insist on waiting until she talks to Billy first. She would be a big hypocrite if she accepted this offer without even consulting Billy, as she is always on his case to make impulsive, one-sided decisions.

Lily may also need some time to consider this choice for herself so Jill can be left in suspense a little longer. Meanwhile, Ashley Abbott (Eileen Davidson) will make a phone call to those waiting for updates in Genoa City. Victor and Nikki Newman (Melody Thomas Scott) will eventually get the shocking news of Chancellor’s (Conner Floyd) survival.

Nina Webster (Tricia Cast) will soon find out that Chance is also alive, but Chance should remain vigilant against the danger involved here. It also becomes difficult for Chance to give up the rest of the mission when he is so close to getting the top dog down.

Still, it looks like Abby Newman-Abbott-Chancellor (Melissa Ordway) will win the battle to bring Chance home where he belongs. Chance will be back in GC before you know it, so more reunions are ahead. As other Y&R information becomes available, we will fill you in.