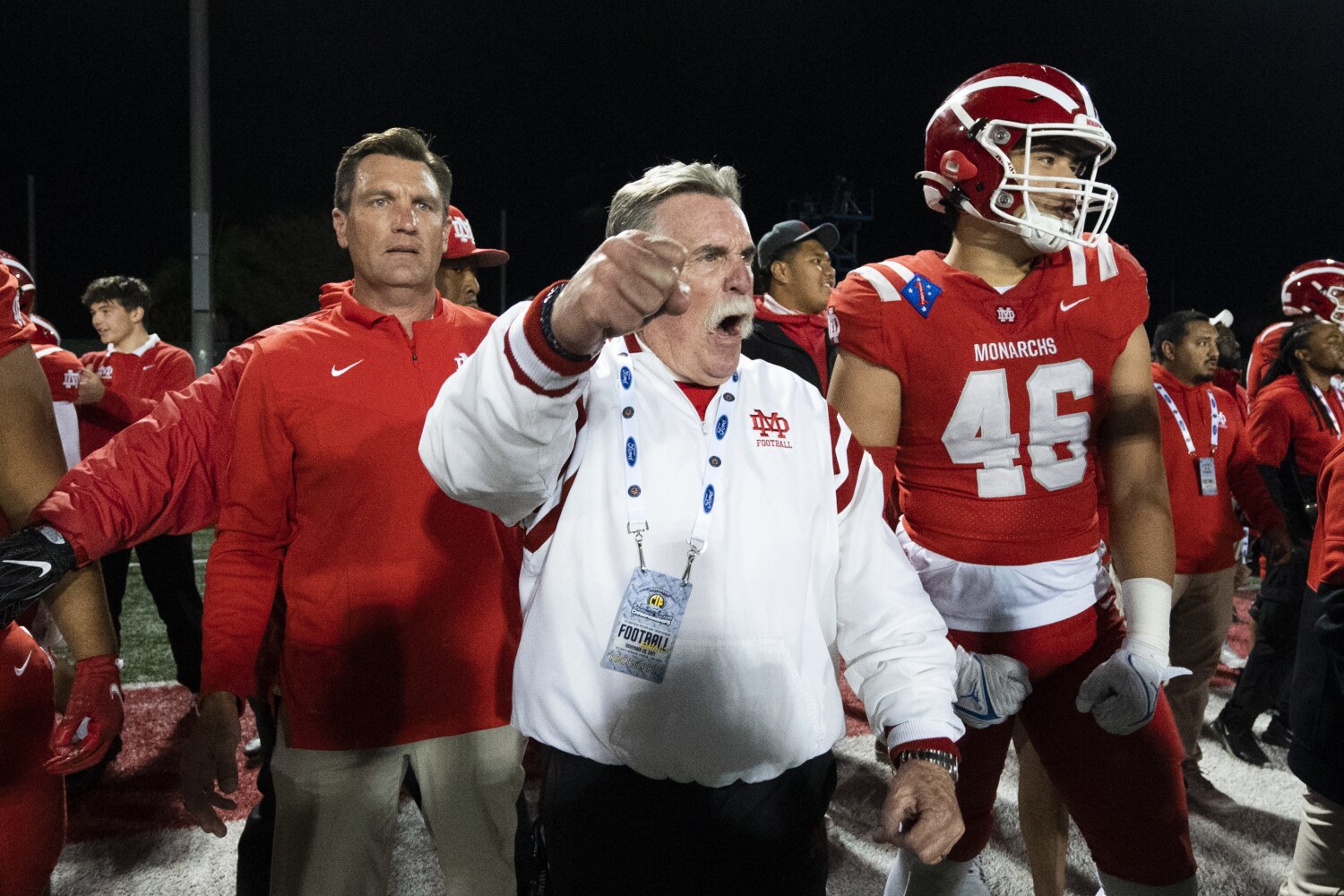 A high school student is assaulted. Their innocence is shattered; their lives changed forever.

School officials are learning about the incident. They do worse than nothing; they cover it up and even laugh at the case. Their superior sees the other way. The assets and addicts are protected; the survivor is expelled. And when critics cry ugly, the institution plays the victim card.

Just another day at Mater Dei High School, the crown jewel of Catholic education in the diocese of Orange.

Its powerful football team is making national news right now, and not just because the Monarchs are on the verge of claiming their fourth national championship in five seasons. A lawsuit filed last month against Mater Dei and the Roman Catholic Diocese of Orange says a former footballer suffered a broken nose, traumatic brain injury and permanent scarring in a February obscurity ritual called “bodies” that responded to a school-sanctioned beating. .

The lawsuit says the team’s adult staff did nothing to stop the victim’s assault from a much larger player, initially ignoring his injuries and lying to Santa Ana police as they investigated the incident. It also claims that when the boy’s father confronted football coach Bruce Rollinson about what happened to his son, the preparatory sports legend cracked: “If I had a hundred dollars for every time these kids played Bodies … I would be a millionaire.”

The victim moved to another school but quickly found out he could not immediately participate in sports because Mater Dei officials put a disciplinary stamp on his transfer papers. Meanwhile, Rollinson – who in 1989 was accused of strangling a female athletic trainer in front of students and ultimately did not ask to disturb the peace of his actions after a trial ended in a hanging jury – is preparing by his team to play next week for the California State Football Championship.

The accusations have disgusted the sports world, especially as it seems that there is a great chance that there will be no disciplinary action at all against the monarchs. Mater Dei President Walter E. Jenkins has just released a letter that basically said the school is moving forward, but which promises to do better in the future; Bishop of Orange Bishop Kevin Vann has not said a word. Through a spokesman – a Mater Dei candidate, no less – both declined further comments because of the “pending civil case and the involvement of minors.”

Orange County prosecutors refused to file criminal charges against the alleged assailant, although a Santa Ana police investigator recommended prosecuting the unnamed student for a crime. Even the California Interscholastic Federation, which governs high school sports in the state, said it would not sanction Mater Dei for what happened, claiming it had no jurisdiction over the school – mind you, Mater Dei plays in a CIF title game dec. 11.

To those who have become unbelievers of all this, I say: Forget it, Jake. It’s Mater Dei.

I covered the school for years in my previous job focusing on the many civil cases of sex abuse that originated from the school. We’re easily talking about more than a dozen known multimillion-dollar settlements over sex abuse since 2002 involving at least 10 accused Mater Dei former employees – counselors, teachers, staff, administrators and more – with almost no discipline for anyone involved.

The latest incident is not a case of sex abuse, but it bears a hallmark of how the orange diocese has handled controversies involving minors on Mater Dei: institutional silence and blurring.

Take the case of former principal Michael Harris. Several male students claimed he repeatedly assaulted them in his office through the 1970s and 1980s before traveling to open Santa Margarita High, where Harris later withdrew in the wake of several charges kept secret by the Orange Diocese. for years. Harris was never convicted of any crimes, but he alone has already cost the orange diocese more than $ 7 million in settlements over sex abuse – and another former Mater Dei student has a pending lawsuit his name is Harris as their abuser.

The orange pin also remained silent in 1989, when Mater Dei officials allowed it then choir leader Thomas Hodgman quietly resigning after admitting to sexually abusing a female student. Then-principal John Weling said nothing to the parents at the time, but did joke to diocesan officials in a note that “there is never a dull moment at [Mater Dei]! ”

The same silence happened again in the mid-1990s with Jeff Andrade, an assistant boy’s basketball coach, whom Mater Dei administrators suspected of inappropriate relationships with female students. When they questioned Andrade about such rumors, legendary head coach Gary McKnight broke into the meeting and told Andrade to a lawyer and say nothing else before arriving.

Mater Dei ended up firing Andrade, who was never convicted of a crime, even though in a statement he admitted to having sex with a minor student. Years later, both he and then-Mater Dei school president Patrick Murphy said during depositions that Andrade returned to campus to help run fundraisers for athletic teams with the blessing of McKnight, who continues to train with Mater Dei.

None of the above has ever been volunteered by Mater Dei or the Orange Diocese; they only emerged through lawsuits and the media.

In 2007, current principal Frances Clare told parents in a letter after another series of lawsuits about sex abuse that the school had “informed and cooperated with the legal authorities in an appropriate manner” about two alleged addicts back in the 1990s. But when I called the child and family services department of Orange County’s Social Services Agency at the time – which mandatory journalists are supposed to contact when they find out about child abuse – they said they had no record of any conversations with Mater Dei.

Student abuse at Mater Dei is not a few junk people through decades; it is institutional. And no one knows this better than that John Manly, which has repeatedly sued its alma mater on behalf of clients for alleged sexual abuse of adults and currently has “several” pending lawsuits against Mater Dei. He has always made it a point that any sex abuse settlement he enters into with the Catholic Diocese involves the release of statements and documents showing what actually happened versus what prelates claimed happened.

For a moment I thought they would.

I really thought Bishop Vann had changed the orange diocese, which has the ultimate jurisdiction over Mater Dei, for the better. His predecessor, Bishop Tod D. Brown, presided over a diocese as bad as the archdioceses of Los Angeles and Boston when it came to protecting pedophile priests and ignoring their sacrifices.

Fortunately, Orange County Catholics have not seen it with Water. But it is a failure of responsibility if he allows Mater Dei football to drop shot-free in this case.

For his part, Manly does not think anything will happen to Rollinson, his former sophomore history teacher.

But what really makes Manly angry about the current unclear case is how Mater Dei has let Monarch’s football team continue to play – and let Rollinson train – as if nothing is going on.

“Why does Mater Dei protect thugs?” asked Manly. “The young man who hurt the student, what has he learned?” Maybe doing it right. “That you can get away with anything.”