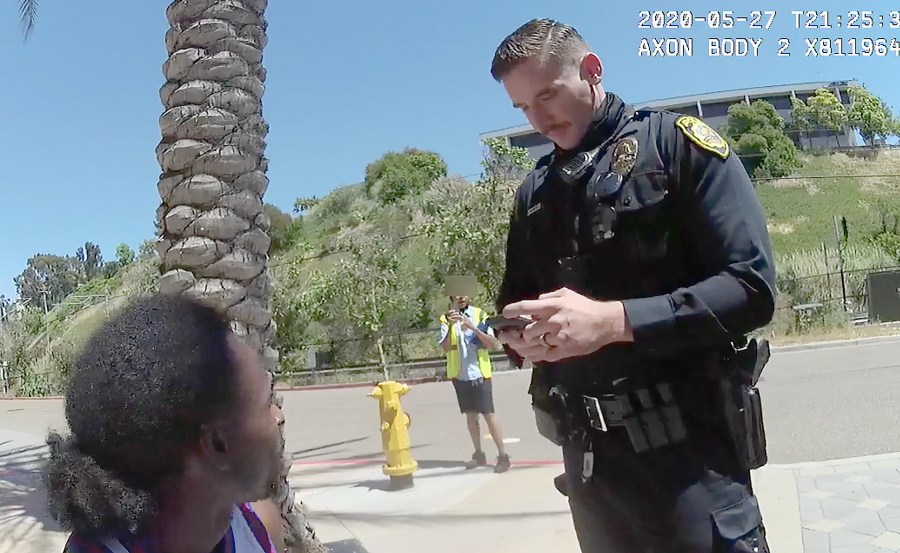 EL CAJON, California (CNS) – A former La Mesa police officer lied on a police report to justify what was becoming a very public and controversial arrest, a prosecutor claimed Wednesday, while a defense attorney said his client’s report was a completely truthful account which received several reviews from his superiors despite the control the police department was under.

Opening statements and testimony began in the trial of Matthew Dages, who is accused of lying about the basis for his arrest on May 27, 2020 of Amaurie Johnson, a young black man waiting for friends outside an apartment complex near the Grossmont Transit Center.

First US case of omicron COVID variant found in California

Johnson’s arrest was captured on video and circulated over social media, triggering particular condemnation in the wake of George Floyd’s remand in custody in Minneapolis, which took place two days earlier.

Dages, who is white, is charged with a felony of filing a false police report and risks up to three years in prison if convicted. He remains out of custody.

Dages participated in a “tariff compliance operation” with other officers at the nearby trolley station, claiming in his report that he initially contacted Johnson to smoke in public and refrain from having a trolley price while in a “tariff-paid zone.”

Deputy prosecutor Judy Taschner told an El Cajon jury that Johnson was holding a cell phone and that no lighter, cigarettes or other smoking utensils were found on his person after his arrest.

The prosecutor said the interaction between Johnson and the officer escalated into a quarrel as Dages would not let Johnson leave the place after his friends arrived.

Videos of the incident show Dages pushing Johnson into a sitting position, which Taschner said happened several times. Dages claimed in his report that Johnson punched his fist, took a “leafy stance” and slapped him on the arm.

According to Taschner, “Dages confronted, detained and arrested a young man who had done nothing wrong, and then he lied about it in his police report.”

He was released due to a misdemeanor, but the police department later announced that it would not seek charges against Johnson, who has filed a federal lawsuit against Dages and the city of La Mesa.

Dages, who had been employed in the department since 2018, was fired a few months later.

Dages’ lawyer, Jeremiah Sullivan, said jurors would see that Dages did nothing wrong, “when you take the aggressive lens of this case.”

The lawyer said that from Dages’ point of view, Johnson kept what appeared to be a smoking device in his mouth. He said Johnson was also in an area where people could not stroll without fare or bus passes and lied to Dages by claiming he was a resident of the apartment complex, but later admitted he did not live there.

When Johnson’s friends arrived, Sullivan said, “the situation changed drastically,” with Johnson and his friends screaming and cursing at Dages.

At one point, Sullivan said, “Johnson decides to leave,” even though Dages had not finished investigating. The lawyer said Sullivan put his hands on Johnson’s shirt to prevent him from leaving, after which Johnson put his hands on Dages, threatened him and punched him, “he almost ended up in front of a haymaker.”

When videos of the incident went viral, Sullivan said, the arrest was “strictly investigated,” and that Dages’ superior instructed him to edit his report three separate times.

Sullivan said that despite his superior having seen the video and their many demands for edits, Dages was not instructed to remove references to fists, a blade position or the fare.