Presented by Jack Daniel’s and Cult Creative, Art, beats and lyrics returns to Miami for its 17th annual exhibition. It is set to take place on Saturday, December 4 in LoanDepot Park – a change of scenery from its usual Wynwood location, but also a spacious backdrop to launch the art tour in 2021 after a brief hiatus last year.

A fusion of black art and hip-hop, the event has evolved into a fixture for local black artists since visiting Miami during Art Week 2002.

Art, Beats & Lyrics founder Jabari Graham says he started the pop-up in 2004 in Atlanta after noting that the art scene did not address urban culture.

“I was fired from one of my jobs,” says Graham. “I used to work at UniverSoul Circus, so from that I wanted to do something in art and music. I pretty much took what I learned from the circus to incorporate something for myself.”

Together with the show’s curator, Dubelyoo Wright, Graham established Art, Beats, & Lyrics as a platform for new and experienced visual artists and performers. A year later, they teamed up with Jack Daniel’s and eventually took their show on the road to introduce the concept to different markets.

“Urban-themed art was not considered mainstream art at the time,” Wright says. “We provided a platform for these visual artists to showcase their work because the galleries would not accept it.”

Graham and Wright carved a path for alternative artists who rarely had room to display their works. Their events “never earned them a pat on the back from galleries,” Wright says, but it invited attendees to interact with a wide variety of cultural installations from artists like Charly Palmer, an Atlanta-based artist whose work has graced the cover of John Legends Grammy Award-winning album Greater love and Time the magazine’s America Must Change “issue of July 2020 and Shepard Fairey, the street artist and graphic artist whose Barack Obama” Hope “poster was ubiquitous during the 2008 presidential campaign.

“Over the years, we have collaborated with hundreds of [artists]. We try to mix it up with established artists and those who are up and coming. It’s part of our recipe for visual art and to cure it, “says Wright.” It gives the younger artist a chance to get their shine on, as well as get the audience to see that these people are the ones to be seen in the coming years. . “ 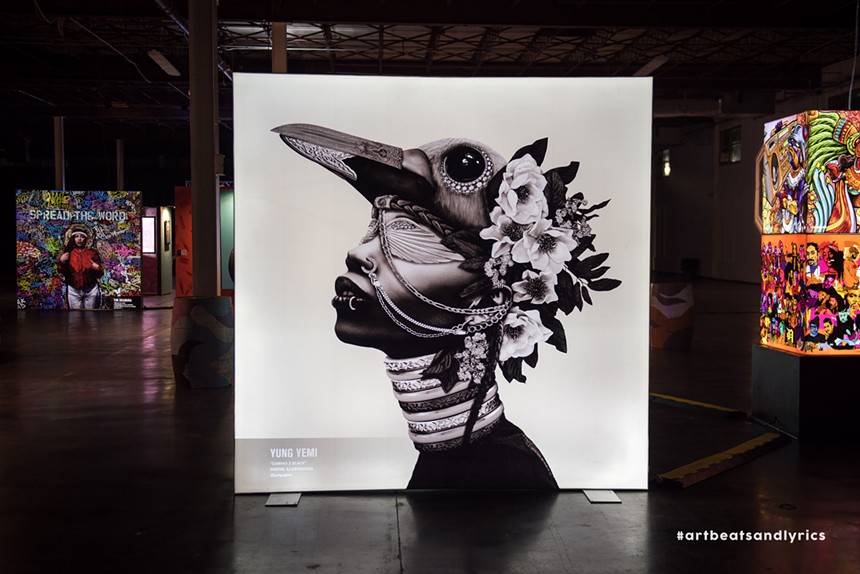 Art, Beats, & Lyrics give urban artists a platform to display their prints and paintings.

Wright and Graham have relied on the same formula to cure their annual Miami Art Week event. Previously, they have featured Miami artists Melissa Mitchell and Kaz “Kazilla” Williams; their 2021 exhibition will feature pieces by Mwanel Pierre-Louis, a local Haitian artist who combines abstraction with elements of realism, and Nate Dee, a native of South Florida whose work is influenced by his Haitian culture, Greek mythology and art nouveau. the movement.

While the participants admire and interact with the art, a surprise list of DJs and musicians is listened to to bring the experience to life. By pairing new talent with vets, previous Art Week shows included appearances from Masego, Sango, D Smoke and Little Brother.

The performances are meant to be an accompaniment rather than a focal point, so you will not be notified in advance about who is playing – the participants will have to wait and see who takes the stage at the Miami show.

“We do not want the show to be overshadowed by talent, so that’s why we tend not to say, ‘Well, we have to have XYZ here,'” Graham says.

Although Graham and Wright are tight-lipped about the music, they shared that they will add and rebuild previous installations as well as reveal new elements to their show.

“This show is almost like turning rust off,” Wright explains. “Doing Art Basel is the Super Bowl of art events. [But] in a way, we look at it as if it is preseason because we have more cities to go to. ”

Miami will mark Art, Beats, & Lyrics’ first stop on its eight-city tour, which includes five new cities and showcases in Los Angeles and Cleveland for the Super Bowl and NBA All-Star Game.

As the event continues to grow, partners say they are constantly finding inspiration in travel, technology and culture for new ideas.

“We like going to conventions, and we like to see what’s new,” Wright says. “If it’s fat, we think How can we include this in the show? And the cool thing about it is having this partnership with Jack Daniel’s [is that] they listen to our ideas so we can make it happen. It’s about being creative and making it happen, and we will always do that. ”