As Omicron-led infections rise across Europe, efforts to vaccinate children aged five to 11 against Covid-19 are divided: While some parents welcome the possibility of protecting their young, others are not convinced of the benefits. for their health.

Regional opinion polls show that 70 percent of parents in Denmark and Spain plan to vaccinate their younger children, but only 40 percent in Germany, Italy and the Netherlands. Fewer than a third of French parents say they are willing to do so.

So far, vaccination is not mandatory for children, and no country has required five- to 11-year-olds to be vaccinated before participating in any activity.

But governments have taken a markedly different approach to vaccinating young people. Some, including Denmark, France, Spain and Italy, recommend all children get the sting, while the UK chooses to vaccinate only vulnerable children.

The lack of a common message means that Europe can fight to convince parents to vaccinate their children, depriving the region of a tool to combat the recent Covid rise.

However, different national policies reflect the rapidly evolving debate among scientists about whether children obtain sufficient individual health benefits of the vaccine to offset the risk of very rare side effects.

Some experts, particularly in the UK, have been reluctant to push for vaccination of young people because children suffer from milder Covid symptoms and are far less likely to be hospitalized. Others argue that they still need protection, especially when the spread of the virus is as high as it is now.

The risk-benefit equation also depends on whether politicians take into account society’s gains from lower transmission, such as keeping schools open and protecting older and vulnerable people.

Andrew Pollard, a pediatrician and director of the Oxford Vaccine Group, said the decision on whether to vaccinate five- to 11-year-olds was “finely balanced” because very few suffered from serious illness.

“If you talk about a 70-year-old, it’s quite clear that all countries believe we should vaccinate the elderly – and now almost all adults – because of their increased risk. But for young children, more are on the fence about whether they need to be vaccinated or not, ”he said.

The EU Medicines Agency approved the BioNTech / Pfizer vaccine for five- to 11-year-olds in November following approval for older children in May. Delivery of lower dose vials began to arrive this month.

In the United States, one of the first countries to inoculate younger children, admission has been sluggish and varies greatly from state to state. About 6 million. or 22 percent of five- to 11-year-olds have received at least one dose since early November.

Denmark, which started inoculating around the same time, has given at least one dose to 40.4 percent of that age group.

Some public health officials have urged parents to take action because some children develop severe cases of Covid, and the rapidly spreading Omicron coronavirus variant could make more of them sick. On Dec. 24, the state of New York said pediatric hospital admissions had risen from 22 to 109 during a two-week period in New York City, where Omicron is widespread, urging parents to “take emergency measures” to vaccinate their children.

Last month, Anthony Fauci, the U.S. chief medical officer, said he had hoped parents would move faster. “What are they waiting for? The infection is here now – protect your children,” he said.

In France, which began vaccinating five- to 11-year-olds on December 22, Health Minister Olivier Véran claimed that children on an individual basis would benefit from jab, especially as the country experienced an unprecedented increase in infections. When asked if he would give it to his own children, he replied, “Yes, without hesitation and as soon as possible.”

“There were 145 children in the hospital last night for Covid-19 and 27 on intensive care,” Veran said. “It’s true that such serious cases are very, very rare, but when it happens to your child, the statistics do not matter.” 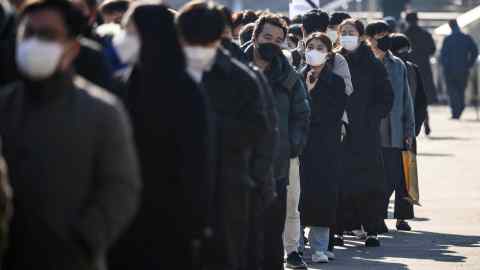 The Haute Autorité de Santé, a panel of independent scientists advising the French government, reported this month that 1,399 children had been hospitalized – out of 5.8 million French children aged five to 11 – between March 2020 and mid-March. December this year. There were 238 cases in need of intensive care, three deaths and 350 cases of multi-system inflammatory syndrome, a rare but dangerous complication affecting some children receiving Covid.

HAS also said it had reviewed adverse reactions from the approximately 10 million children up to the age of 14 who had been vaccinated globally so far, and found the data “still limited but reassuring in the short term”.

From a European database, it identified about 30 reports of serious side effects in children, including 12 cases of myocarditis, a rare cardiac side effect to messenger RNA plugs that tend to affect young boys more than girls. In the United States, where 7 million doses have been given to children, 14 cases of myocarditis were reported by December 10, and most were treated and resolved, it says.

However, the risk of myocarditis was higher if a child develops Covid, according to the HAS analysis, so the overall balance between risk and benefit of vaccinating children was favorable when the incidence of infection in society was moderate to high. When low, the risk of side effects outweighed the benefits, especially for young boys.

Even if only half of the eligible children were vaccinated, HAS estimated that it would reduce infections in that age group in France by 75 percent over three months, which would help schools stay open.

After reading the HAS report, Olivier Chappe, an engineer living near Lyon, said he was inclined to have his eight-year-old son vaccinated as he had already had his 12-year-old daughter pricked.

“The risk of my children becoming very ill or dying from Covid-19 is very low, but we do not know the risk of long-term Covid for them,” he said. “Children will continue to be infected if they are the only ones in society who are not vaccinated and who knows if the next variant will be more frightening.”

In Dublin, Ben Lyons, a father of two, has decided not to vaccinate his five- and eight-year-old children.

“My answer is a very strong no,” he said. “We do not buy into the conspiracy theories, but most children are still not influenced by Covid.” Lyons, who works in a pet store, said he was also put off because his daughter had a severe reaction to a vaccination when she was a small child.

Despite other European countries moving forward with childhood vaccination, the UK Joint Committee on Vaccination and Immunization (JCVI) has decided that only the most clinically vulnerable should be vaccinated. It only acknowledged with the second dose for 12- to 15-year-olds in late November, after anxiety began to rise over Omicron. In contrast, France began vaccinating that age group in June and Germany in August.

Adam Finn, a professor of pediatrics at Bristol University who sits on JCVI, said it was “50:50” whether the committee would give the green light to vaccination for all children in the coming months.

“If we continue to vaccinate all children aged five to 11, we need to be convinced that we are doing good to someone by doing so,” he said. “And not just doing it because it’s something we can do and we’m so desperate to do something.”

Additional reporting by Richard Milne in Oslo, Kiran Stacey in Washington and Joe Miller in Frankfurt