Boris Johnson has warned that it would be “absolute folly” to say the pandemic is over – but said the Omicron is “clearly milder” than other variants.

Despite a large increase in coronavirus cases in recent weeks, the prime minister said the UK is in a better position than most other countries due to the “very, very high level of vaccination”.

But despite the fact that Omicron is “clearly milder” than other variants, the NHS is under pressure due to its high portability – and the public must do everything they can to help alleviate this pressure by following Plan B- measures.

Follow live COVID updates from the UK and around the world 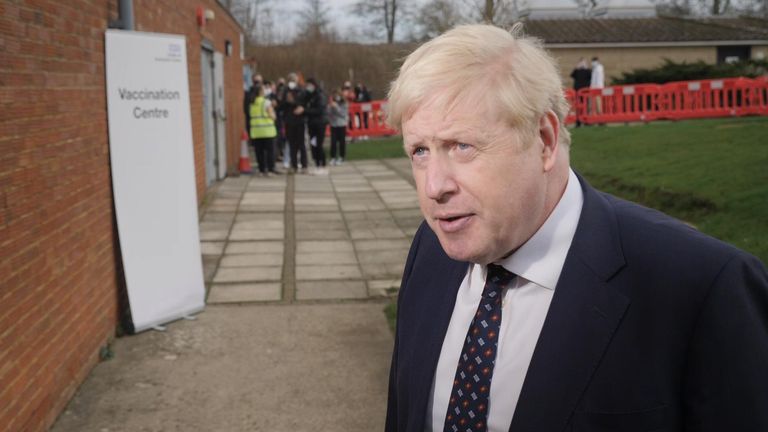 ‘Significant’ pressure on the NHS in the coming weeks

Johnson, speaking at a vaccination center in Aylesbury, said: “My view is that all the evidence [shows] Omicron is much milder, significantly milder than previous variants.

“And we’m much more boosted, so our position is far, far better, but I think this is what I would say to everyone: looking at the pressure on the NHS in the next few weeks and maybe longer, and looking at the number of people going into the hospital, it would be absolute stupidity to say that it’s all over now except for the shouts.

The Prime Minister added that fewer people are being admitted to intensive care units with Omicron than previous variants, but most of them in the hospital with COVID have not received their booster jab.

And he stuck to the line that his ministers have been following since the New Year, saying they will keep all restrictions under surveillance, “but the mix of things we are doing at the moment is, I think, the right one”.

READ: Hospital admissions in over 50s are rising, says minister

His comments came after Chris Hopson, head of NHS Providers, which represents NHS trusts, told Sky News that the NHS is dealing with three issues at once: rising COVID hospital cases, staff absenteeism due to COVID and an already busy NHS and social care system.

He warned that putting pressure on staff to meet the demand gap is “unsustainable”.

“We ask our staff to go and go and go again, every day of the week,” he told Sky News. “Everyone is talking about an almost impossible workload.”

He added that there should be a “serious” national discussion on better investment in the NHS – but said the reduction in isolation time for those tested positive from 10 to seven “already” has a beneficial impact on staff absenteeism.

Earlier on Monday, Education Minister Nadhim Zahawi told Sky News that ministers are “concerned” the number of over 50s being admitted to hospital with COVID is rising.

He added: “If we see more leakage of infection in over 50s – because most of the increase in infections from Omicron variant has been under the 50s – then those people are more likely to end up with serious infection and hospitalization.

“But the good news, of course, is that 90% of the people over 50 have had booster jabs – that’s the real protection against serious infection and hospitalization.”