Step aside, ultra-modern gadgets. The good old radio is at the center as the theme for this year’s Art Deco Weekend.

“Miami is such a dynamic place where we have people visiting and moving here all the time,” says MDPL CEO Daniel Ciraldo New Times. “If you think of a postcard from Miami or Miami Beach, you think of the neon lights and beauty along Ocean Drive. This weekend is all about educating and preserving those icons.”

In pre-pandemic times, the three-day festival attracted more than 150,000 visitors annually. Among its biggest draws are the guided architectural tours to Miami’s art deco brands, a classic car show, film screenings at the O Cinema and a massive outdoor artisan market, all of which are a tour this year. A full schedule of events – including any last minute changes – is available at artdecoweekend.com.

The festival is one of MDPL’s largest annual fundraisers, with proceeds from its guided tours and other facets benefiting its conservation efforts.

As for why the MDPL went with a radio theme this year, Ciraldo says, “Hearing all this talk about Miami becoming a technology hub made us think of Miami’s first wave of development and the technology associated with it. The impact of radio technology on marketing and promoting the city was critical. 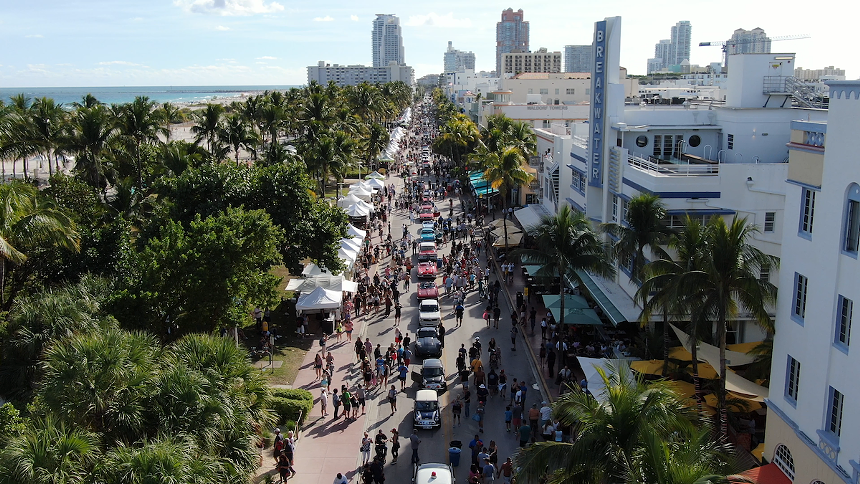 Art Deco Weekend is back and is set for personal happenings again.

“In the 1920s, radios had longer range with their broadcasts,” he continues. “Hotels in Miami would broadcast the incredible musical performances in hotels to lure people to the city. You could also say that the radio influenced the design of art deco buildings. If you squint at buildings along Ocean Drive, they look a bit like radios.”

And what radio-inspired event would be complete without some tunes?

Throughout the Art Deco weekend, several 1920s and 30s-inspired musical tracks will perform, including the French Horn Collective (January 15) and the Miami Swing Allstars (January 16). Also what makes this year’s party unique is its lecture series and the radiocentric topics. For audiences staying home, Sydney University’s Peter Sheridan will offer a presentation on the most beautiful radios ever made, on Friday 14 January. For those attending the personal events, a highlight will be author Danielle Shapiro’s chat on January 15th. at the Wolfsonian-FIU about the famous industrial designer John Vassos.

“One of the many joys has been that people have told us how many decades they have been to our event and that some have told us that they first came as children and now bring their own children,” he says. “We have amazing roots in art deco here in Miami, and it’s going to be great to celebrate them together again.”