China’s People’s Liberation Army (PLA) on Friday announced an upcoming raffle via social media, where it plans to give away a stone taken from the Galwan Valley in northern India’s Ladakh state to “10 lucky network users”, China’s state-run Global Times reported.

The PLA’s Western Theater Command announced the draw on January 7 through a statement issued by its official Sina Weibo account. Sina Weibo is a Chinese microblogging platform that is often compared to Twitter. The blog post described the command’s plans to “randomly select 10 lucky network users from among those who resubmitted the message and send them a stone from the Galwan Valley as a gift,” according to Global Times.

The ad was accompanied by a photograph of Chinese PLA soldiers “patrolling the Galwan Valley” along a cliff face in the western Himalayas. The command superimposed Chinese characters on the image that read, “Amazing scenery, no one to give up.”

That Global Times quoted some Sina Weibo posts allegedly made by anonymous Chinese “netizens” or social media users in response to the PLA lottery. Such a reaction “praised” the giveaway, describing it as “a very meaningful gift, as such a stone showed the attitude of the Chinese not to give up an inch of the territory of the country.” 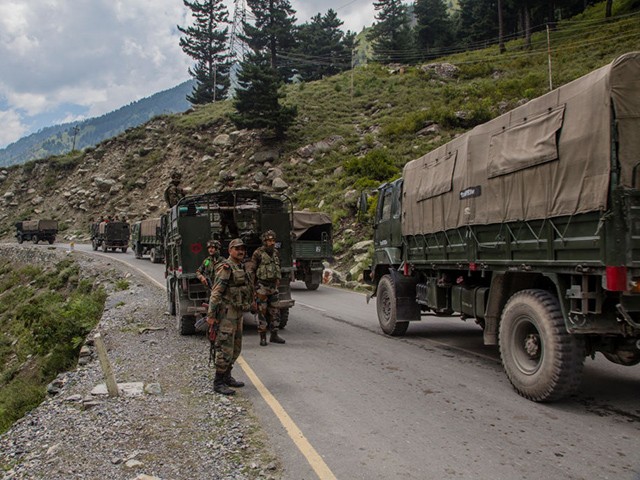 Indian army convoy with reinforcements and supplies is driving towards Leh, on a highway bordering China, on September 2, 2020 in Gagangir, India. India and China have once again run into a bloody clash across their common border. (Photo: Yawar Nazir / Getty Images)

China’s PLA has been at a border crossing with the Indian Army along the two nations’ unmarked Himalayan border since June 15, 2020, when Indian and Chinese border regiments faced a deadly melee battle in the Galwan Valley. The clash killed 20 Indian troops and reported 40 Chinese soldiers, though Beijing officially confirmed only two PLA deaths from the incident, allowing it to falsely claim victory. The military in both China and India deployed additional troops and equipment to their unmarked Himalayan border in the weeks and months following the conflict in Ladakh. The meeting allegedly triggered after Chinese troops invaded Indian territory in an overnight operation.

China’s PLA allegedly reinforced its military presence along various sites spanning China’s western Himalayan border with India in the days immediately preceding May 17, 2021, according to a report by India today.

“Chinese forces are returning to their traditional training areas for an exercise near eastern Ladakh,” anonymous sources reportedly said India today back then.

That Global Times dismissed that India today report as exaggerated on May 20, 2021, claiming that the build-up of PLA by border troops along China’s border with India earlier that month was merely “routine.”

“[I]”It is routine for the Indian and Chinese armies to make deployments along the border in the summer, where experts warn India not to misjudge the situation and trigger a new round of conflicts,” the Chinese state media wrote.