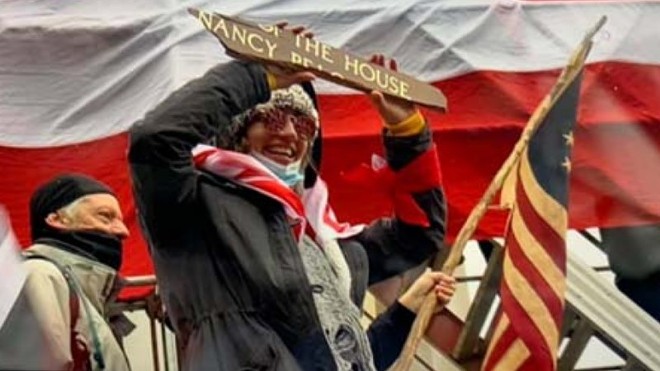 Emily Hernandez, who last week was accused of killing a Missouri mother in a drunken crash, today pleaded guilty to a federal misdemeanor for joining rioters a year ago in the U.S. Capitol.

Hernandez, 22, faced five misdemeanors in the Capitol case, but asked for a single charge of illegally entering and remaining in a restricted building or area. When Trump loyalists stormed the building and ransacked the offices of Congress on January 6, 2020, a grinning Hernandez was filmed by ITV paralyzing housewife Nancy Pelosi’s broken nameplate through the building.

She runs the risk of conditional imprisonment or a minimal prison sentence if her federal case follows others who asked for similar crimes in connection with the uprising. But Hernandez is expected to be charged with crimes in last week’s Missouri crash.

Wednesday night, the day before the anniversary of the Capitol attack, Hernandez drove the wrong way on Interstate 44 and hit an SUV near St. Louis. Clair and Franklin County. A passenger in the SUV, 32-year-old Victoria Wilson from St. Clair, was killed. Her husband, Ryan Wilson, 36, was injured.

Hernandez was arrested by the Missouri State Highway Patrol on suspicion of driving while intoxicated, resulting in death, and driving under the influence of alcohol, resulting in serious injuries. Franklin County prosecutors are reviewing the case.

There’s a GoFundMe to help pay for Wilson’s funeral.