More than half a tablespoon of olive oil a day can reduce the risk of dying from heart disease and cancer.

Olive oil is part of the ‘Mediterranean diet’ consumed in countries such as Italy, Spain, France and Greece.

People who eat this way, have plenty of vegetables, fruits, fish, nuts and grains as well as olive oil, are notoriously healthier and live longer.

But a new study of more than 90,000 people suggests that olive oil alone can reduce the risk of dying prematurely.

Study participants were asked about their diet every four years, including whether olive oil used in salad dressings, added to food or bread, and used for baking or frying at home. 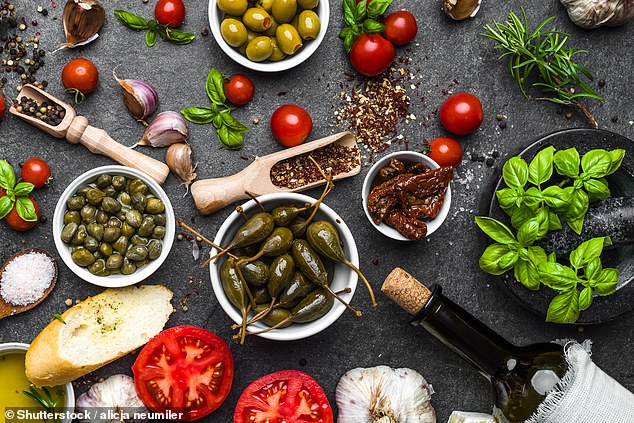 More than half a tablespoon of olive oil a day can reduce the risk of dying from heart disease and cancer, a new study has found. Pictured: A Mediterranean diet is often rich in olive oil

Researchers found that people who consumed more than half a tablespoon of olive oil a day were 19 percent less likely to die from any cause than people who rarely or never got olive oil.

A major benefit of olive oil may be that people use it instead of fatty products like butter and mayonnaise, which helps lower their level of ‘bad’ cholesterol.

When the study looked at the effects of replacing about three-quarters of a tablespoon of butter with olive oil every day, they found that this would reduce someone’s risk of an early death by 14 percent.

Dr. Marta Guasch-Ferré, lead author of the study, from the Harvard TH Chan School of Public Health, said: ‘Our results support current dietary recommendations to increase the intake of olive oil and other unsaturated vegetable oils.

“Clinicians should advise patients to replace certain fats, such as margarine and butter, with olive oil to improve their health.” 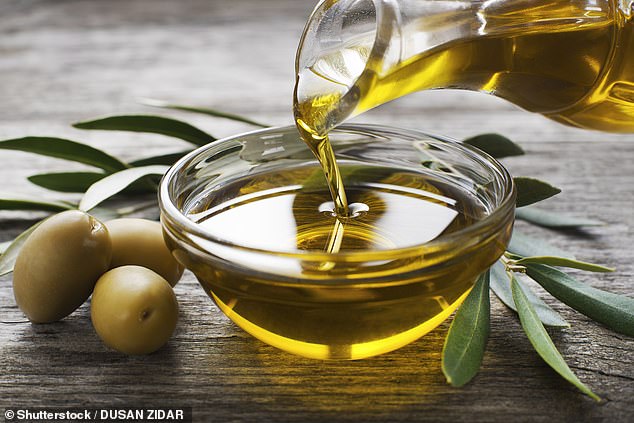 Researchers found that people who consumed more than half a tablespoon of olive oil a day were 19 percent less likely to die from any cause than people who rarely or never had olive oil.

The study, published in the Journal of the American College of Cardiology, shows that olive oil can provide benefits even when people have far less of it than it consumes in the Mediterranean countries.

Compared to people who rarely or never ingested olive oil, those who received more than half a tablespoon a day were 18 percent less likely to die from respiratory diseases.

Interestingly, they were also 29 percent less likely to die from neurodegenerative diseases such as Alzheimer’s disease.

But there is still no clear evidence that it is better than refined oil to prevent diseases such as cancer and heart problems.

Experts believe that the impact of olive oil on health is likely to come from several properties, including its monounsaturated fatty acids.

When researchers looked at the effects of replacing olive oil with 10 grams, equivalent to three-quarters of a tablespoon, margarine, it was shown to reduce the chances of dying early by 13 percent.

The corresponding reduction in the risk of mayonnaise was 19 per cent.

Dr. Marta Guasch-Ferré said: ‘It is possible that higher olive oil consumption is a marker of a generally healthier diet and higher socio-economic status.

“But even after adjusting for these and other socioeconomic status factors, our results remained largely the same.”