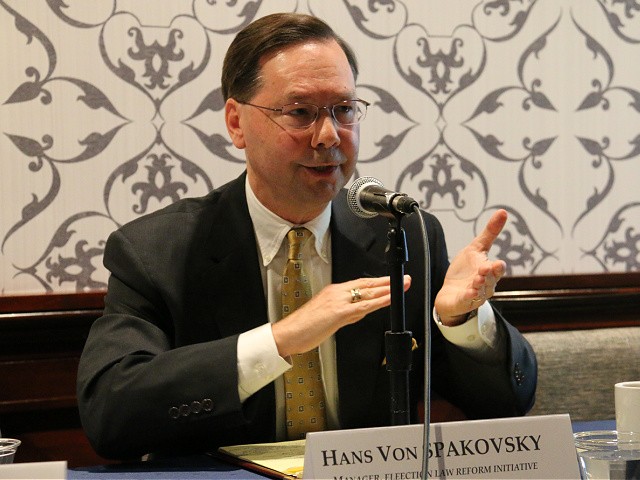 Talks of “voter repression” are a “big lie” used by Democrats and the wider left as a pretext to undermine electoral integrity, Hans von Spakovsky, leader of the Heritage Foundation’s Election Law Reform Initiative and a senior legal fellow at the Meese Center for Legal and Judicial Studies, observed on Tuesday’s edition of SiriusXM’s Breitbart News Daily with special guest host Jerome Hudson.

Democrats and the wider left regularly refer to “racism” as American social pathology that informs “voter oppression” policies to undermine and violate the voting rights of black citizens they characterize as racial victims. Spakovsky noted that Democrats use this false narrative as a justification for legislation they put forward as an advance on “voting rights.”

“It’s just a big lie,” von Spakovsky declared, “and why do they maintain that lie? Well, to push legislation through Congress that would take over the electoral process across the country and basically get rid of any security and safety protocol, as states have introduced as voter ID – they will make it easy to cheat in elections. “

He continued: “The Voting Rights Act has been in place since 1965; if and when there is actual racial discrimination going on in a voting context, there are laws that prevent it.”

Von Spakovsky recalled: “There is so little racial discrimination these days that during the entire eight years of the Obama administration, in which they had complete and total control over the Department of Justice … despite all their rhetoric, they filed only four lawsuits across the board. country and claimed that a state or locality discriminated in a voting context. Four eight-year trials across the United States, which in itself shows what a lie they are telling the American people. “

He warned: “What these bills are doing is changing the voting rules in a way that they think will give them a political advantage. It has absolutely nothing to do with securing the vote, protecting the vote. They want to do things like, through their automatic voter registration mandates that they want to make sure that people who are not U.S. citizens but who get driver’s licenses are registered to vote and can get away with it. “