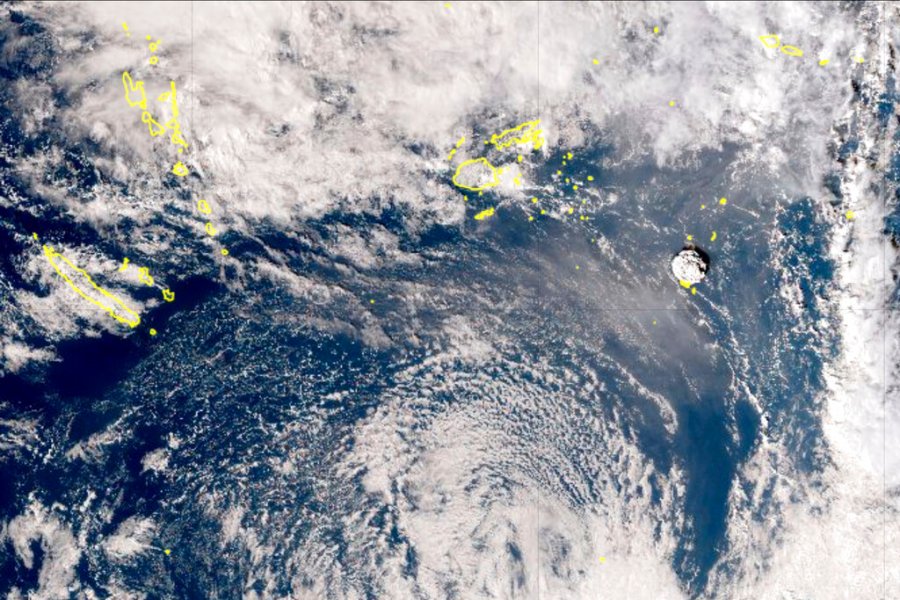 An underwater volcano erupted spectacularly near the Pacific nation of Tonga on Saturday, sending huge tsunami waves crashing across the coast and people rushing to higher terrain. A tsunami alert was issued for Hawaii, Alaska and the US Pacific coast.

There were no immediate reports of damage or the extent of the damage as communication with the small island nation remained interrupted hours after the eruption.

In Hawaii, the Pacific Tsunami Warning Center reported that waves crashed from half a meter (one foot) in Nawiliwili, Kauai, to 80 centimeters (2.7 feet) in Hanalei. “We are relieved that no damage and only minor flooding have been reported across the islands,” the center said, describing the situation in Hawaii.

The New Zealand military said it was monitoring the situation and remained on standby, ready to assist if requested.

Satellite images showed a huge eruption, a cloud of ash, steam and gas rising like a sponge over the blue Pacific waters.

Tonga Meteorological Services said a tsunami alert was issued for the entire archipelago, and data from the Pacific Tsunami Center showed that 80 centimeters (2.7 feet) of waves had been detected.

In Hawaii, Alaska, and along the U.S. Pacific coast, residents were asked to move away from the shoreline to higher terrain and heed specific instructions from their local emergency management officials, said Dave Snider, tsunami alert coordinator for the National Tsunami Warning Center in Palmer, Alaska.

“We’re not issuing advice for this length of coastline that we’ve done – I’m not sure when it was last – but it’s really not an everyday experience,” he said. “I hope it increases the importance and seriousness of our citizens.”

He said the waves already hitting Hawaii were just below the criteria for a more severe tsunami alert, with measurements at 80 centimeters (2.7 feet) in Hanalei and Maui. Waves of about 91 centimeters (3 feet) or more would trigger a warning. Snider said they currently expect waves of 30 centimeters (1 foot) to 61 centimeters (2 feet) along the Pacific coast.

Snider said residents in these areas should expect waves and strong and unusual currents for many hours, and that there could be some low-lying areas that are flooded, such as marinas and ports.

“The important thing here is that the first wave may not be the biggest. We could see this play for hours,” he added. because this is a volcanic eruption and we are set up to measure earthquakes or seismically driven ocean waves. “

Residents of American Samoa were warned of the tsunami alert by local broadcasters as well as church bells ringing throughout the territory. An outdoor siren warning system was out of order. Those living along the coastline quickly moved to higher terrain.

As night fell, there were no reports of injuries and the Hawaii-based tsunami center canceled the alarm.

Authorities in the nearby island nations of Fiji and Samoa also issued warnings, telling people to avoid the shoreline due to strong currents and dangerous waves. The Japanese Meteorological Agency said there may be a slight swelling of the water along the Japanese shores, but it was not expected to cause any damage.

The news site Islands Business reported that a convoy of police and military troops evacuated Tonga’s King Tupou VI from his palace near the coast. He was among the many inhabitants who set course for higher ground.

The explosion of the Hunga Tonga Hunga Ha’apai volcano was the latest in a series of spectacular eruptions.

“Can literally hear the volcanic eruption, it sounds pretty violent,” he wrote, adding in a later post: “Raining ash and small pebbles, darkness covers the sky.”

More than 2,300 kilometers (1,400 miles) away in New Zealand, officials warned of storm surge from the eruption.

The National Emergency Management Agency said some parts of New Zealand could expect “strong and unusual currents and unpredictable waves off the coast after a major volcanic eruption.”

The volcano is located about 64 kilometers (40 miles) north of the capital Nuku’alofa. Back in late 2014 and early 2015, a series of eruptions in the area created a small new island and disrupted international flights to the Pacific archipelago for several days.