Independent Italian lawmaker Laura Granato was shocked by the phone call she received this month. “Hello, it’s Mr Bunga Bunga,” said the familiar voice at the other end. It was Silvio Berlusconi.

Ahead of a crucial presidential election, the 85-year-old media mogul and former Italian prime minister has attempted a political comeback with an attempt to gather support across parties around his barely disguised self-candidacy for the presidency.

With the right-wing League and the Brothers of Italy having expressed public support for their former coalition leader, Berlusconi seeks to convince independents, centrists and rebel members of the populist Five Star Movement.

Granato, who was previously affiliated with Five Star, revealed his conversation with Berlusconi during a radio interview, saying the two had talked about vaccines and the Italian legal system. Berlusconi could not be reached for comment.

Berlusconi, whose tenure as prime minister lasted from the mid-1990s to 2011 was tainted by sex scandals and corruption allegations, remains a deeply divisive figure in Italian politics.

His efforts to orchestrate a comeback have sparked fears among center-left politicians and political analysts over the future of the national unity government, which has brought the right and left together behind Prime Minister Mario Draghi.

The concern is that the media mogul’s de facto candidacy will derail efforts to reach an agreement across the parties on a new president – presumably Draghi himself – and complicate the election process, further increasing the risk of a government crisis that could push Italy against an early election. .

As for having Berlusconi as president, “it would pose a problem with the international credibility of the Italian institutions with extremely serious consequences that would lead to a political earthquake,” Democratic Party deputy secretary Peppe Provenzano told the Financial Times.

Massimo Giannini, editor-in-chief of the Italian daily La Stampa, wrote that a Berlusconi presidency could only become a reality in a country “with merriment and oblivion”, citing the former prime minister’s record of scandals.

The President of Italy is elected by members of Parliament and regional delegates. Candidates must be supported by two-thirds of the electorate to win, although the required majority falls to more than half of the electorate when the vote reaches a fourth round.

Draghi, who is seen as the frontrunner for the job even though no formal nomination procedure exists, has said that Italy’s next president should be a unifying figure who will retain the spirit of dialogue and cooperation in his national unity government.

He has suggested that a divisive presidential election would make it difficult for him to continue to adopt reforms and make difficult, often unpopular, decisions to limit the spread of Covid-19.

But Berlusconi is convinced this is his last big chance after 25 years of public service, according to lawmakers from his party. “He wants to walk out the door through the main gate,” said a member of Berlusconi’s Forza Italia party, who spoke on condition of anonymity.

Despite his energetic efforts – which have included publishing pictures of his younger self accompanied by lists of his exploits in his family’s daily newspaper, Il Giornale – even many of Berlusconi’s allies see his emergence as president unlikely.

Gianni Letta, a former Member of Parliament and official of Forza Italia and a longtime friend of Berlusconi, said that “voters should be inspired by the national interest, not one’s interests. [political] camp. “Another political ally, Vittorio Sgarbi, said Berlusconi was upset:” The situation is very difficult. “

The media mogul left the government at the height of Italy’s debt crisis after being put under pressure by rating agencies and the European Central Bank – then led by Draghi.

“Berlusconi has an inherited sin that makes him radioactive, and that is the proximity to Russia,” Galietti said. “He was seen as too close to Russia, and you do not get over it.” 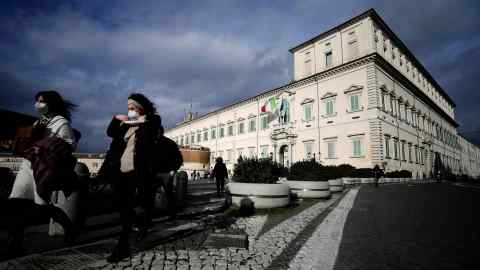 Reports on Tuesday suggested Berlusconi was aware he was struggling to find adequate support and could decide to step out of the competition before the formal presidential election process begins on Monday.

“Berlusconi knows his limits where the red line is,” Galietti said.

Analysts say right-wing parties may prefer to see a Draghi presidency that will help maintain market confidence in Italy’s prospects, especially with the next parliamentary elections looming in 2023. Salvini said: “Although I do not control his fate, do Draghi, as Prime Minister, “I feel confident in implementing reforms.”

That solution could also be supported by the center-left camp and help maintain the spirit of national unity – but much may still depend on whether Berlusconi continues to aim for a political comeback or whether his allies persuade him to step down. gone.