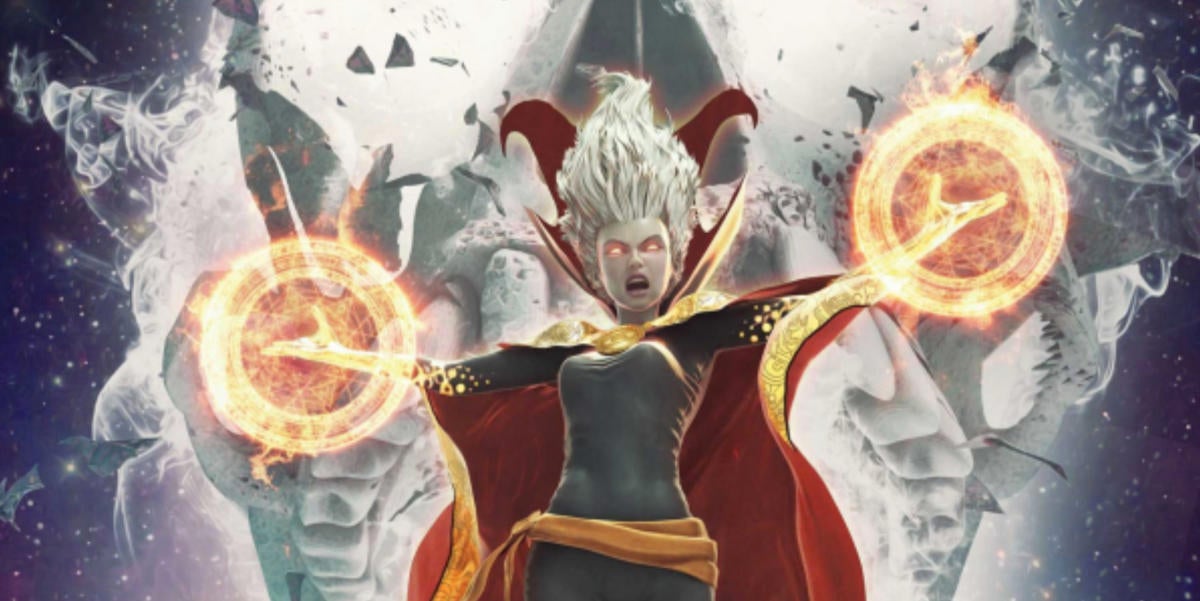 Jed MacKay and Marcelo Ferreira’s new Strange series begins with a bang, literally, at least one on the door. The surprise that this creative team brings to the threshold of The Sanctum Sanctorum in these first pages cements this new series’ place quite firmly in the Marvel Universe while also ensuring that we readers realize, “well, anything goes here, huh?”. Readers that might not have dug into the “Death of Doctor Strange” event need not worry though as every piece of context you’ll need is here, and it seems like there’s a lot of unique decisions at play in Marvel Comics’ Strange.

Clea, the Dark Dimension-born spouse of Stephen Strange, has inherited his title as Sorcerer Supreme along with all his many magical gizmos. Though charged with the responsibilities that such a title holds Clea has only one thing on her mind, resurrecting Stephen Strange. This seems to almost immediately undercut the reason and the potential for this series. MacKay does great work in establishing Clea as an interesting character with this particular power set, holding even some abilities that Stephen himself did not, but her outright saying that her goal is bringing Stephen back (something we all can assume will happen in time for the new “Multiverse of Madness” movie) takes the wind out of these sails.

Marcelo Ferreira’s pencils add a unique layer to the story, he gives Clea a range of expressions across the issue that builds up the characters in tandem, and even manages to make one particular character seem to show emotion despite their static face (you’ll understand when you read it). When the character activates her magical powers the art really comes alive, with spell casting and charms feeling fresh and distinct for this new era. Inks on the title are credited to Don Ho with Roberto Poggi, whose work really brings out the facial expressions throughout, and colors by Java Tartaglia w / Felipe Sobreiro, who make all the spells and demons pop. The five credited artists make the entire look work, especially the big moments of magic.

If there’s a place where Strange # 1 stumbles it in some of the action beats. New locations and bands of characters arrive midway through and even though they enhance the story in a unique way it feels like a means of letting Clea display her abilities more than pushing the narrative forward. Cool as that is to see, in particular her demon harnessing powers, its narrative function is in creating a scene for the character to show off not a natural progression. It’s a detour in the story, albeit a fun one.

One might also find the opening of Strange # 1 tedious. The storytelling trick of “show the ending and then show how we got there,” has grown stale in comics but MacKay threads the needle, delivering an opening pair of pages that raise your eyebrows and then following that with so much more story you forget by issue’s end when these things come full circle, however there’s one last surprise that reminds you of that other surprise at the start. Clea may be after resurrecting Stephen Strange but this series seems hellbent on doing things that will fill that road full of unexpected deviations.

Fans with a fresh face for the mystical magics of Marvel will have no problem leaping into it Strange # 1, and what they’ll find is a rewarding first issue that shows promise. While Strange # 1 feels overloaded at times, there’s enough fun to be had for all, especially newcomers. MacKay’s ideas for the comic do seem guided toward a return to the status quo but the journey there appears to be filled with surprises that readers will not be able to predict.

Art by Marcelo Ferreira and Don Ho with Roberto Poggi