The Beyonder is returning to Marvel Comics in June, in a new Defenders series. And not just any old Beyonder but the Beyonder with a mullet from Secret Wars II… while also sporting an Omega symbol on a visor between his massive shoulder pads. Saying “AN UNEXPECTED FOE FOR THE DEFENDERS ARRIVES FROM BEYOND! The DEFENDERS return this June. Stay tuned tomorrow to learn more.” 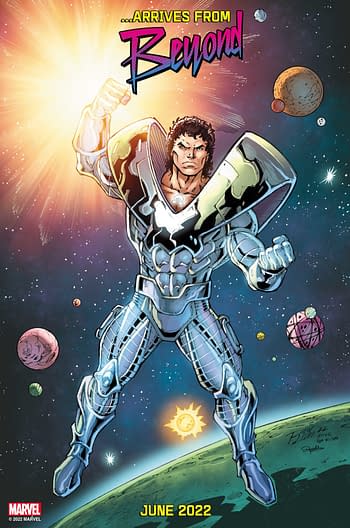 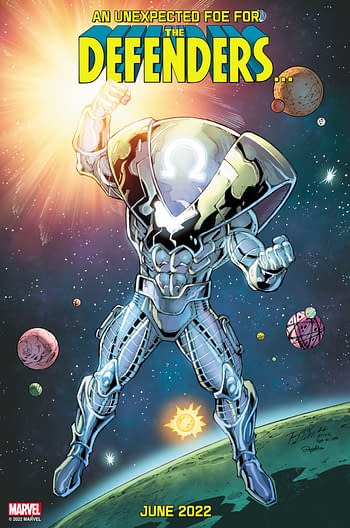 The Beyonder created by Jim Shooter spirit Mike Zeck first appeared in Secret Wars # 1 in 1984 as an unseen, self-proclaimed omnipotent being who kidnapped the heroes and villains of the Marvel Universe and had them do battle on another planet called Battleworld. The character later appeared in a more antagonistic role in the 1985 sequel Secret Wars II, in which he took human form, and threatened to destroy the Marvel multiverse. Although he first took on a physical, humanoid form in Secret Wars II # 2, it was in Secret Wars II # 3 that he took on the preferred form which he used for the rest of his existence, that of a human male with curly black hair and a bit of a millet. Although the character seemsingly met his demise at the end of Secret Wars II, he has subsequently appeared in stories well into the 2000s. At one point, Brian Bendis had The Illumiati reveal that the Beyonder was an all-powerful Inhuman and that the events of Secret Wars II were entirely of his concoction, but everyone has tried to forget that one. Will the new series remember, or like everyone, so out best to forget?

It was revealed in Secret Wars Official Guide to the Marvel Multiverse that in the distant past, the enigmatic Beyonders created pocket universes holding vast amounts of sentient energy, possibly as incubator units for their young. Some were later tapped into by various beings, including Skrulls and Humans, to create reality-warping Cosmic Cubes. The Beyonders also had engineered an accident that created a pinhole to the universe containing the “Child Unit” Beyonder of Secret Wars, which had also caused Molecule Man to obtain his power.