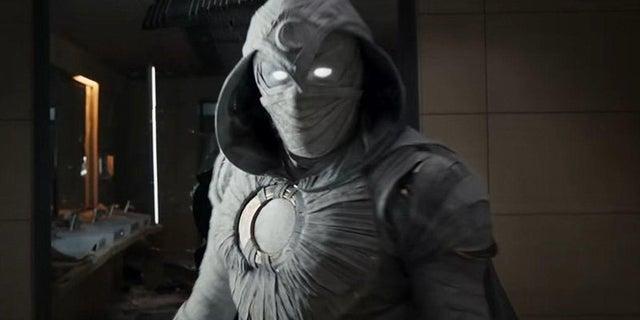 The latest installment in the Marvel Cinematic Universe, Moon Knight, debuted on Wednesday and it’s not only audiences that are loving the latest Disney + series. Critics are raving about Moon Knight as well. Now, just a few days after the series’ debut, Moon Knight is certified “fresh” on review aggregator site Rotten Tomatoes. The series is presently (at the time of this article’s writing) sitting at 87 percent with 107 reviews on the Tomatometer. The series also has an impressive audience score of 94 percent as well. The general consensus? Moon Knight is unlike any other MCU installment – in the best way possible.

ComicBook.com’s Adam Barnhardt Gift Moon Knight a 5 out of 5 review and described the series as “a massive show, packed to the brim with excellent character moments,” and as “something you will not want to miss out on.” You can check out the full review here.

Moon Knight follows Steven Grant, a mild-mannered gift shop employee who becomes plagued with blackouts and memories of another life. Steven discovers he has dissociative identity disorder and shares a body with mercenary Marc Spector. As Steven / Marc’s enemies converge upon them, they must navigate their complex identities while thrust into a deadly mystery among the powerful gods of Egypt. The series stars Oscar Isaac as Steven / Marc, Ethan Hawke as Arthur Harrow, and May Calamawy as Layla El-Faouly.

“It’s a story about identity and finding one’s true self,” series executive producer Grant Curtis previously told USA Today. “The journey that Marc Spector is on during our whole show is: Who am I? And how do I reconcile portions of my past, present and potential future that I do not necessarily agree with? Coming to terms with our baggage and learning to live with ourselves is what we all deal with on a day-to-day basis. “

“It’s amazing that the brain has this survival mechanism, this way to cope,” Isaac said in the same interview. “At a very young age, if you are going through sustained horrible trauma and abuse, something that can happen in order for one to survive is the brain splits into an alternate personality that has no idea of ​​what’s happening. Otherwise, you die because it just so awful. And that is its own incredible, kind of beautiful superpower. “

Have you seen the first episode of Moon Knight? What do you think of the latest Marvel series? Let us know your thoughts in the comment section!