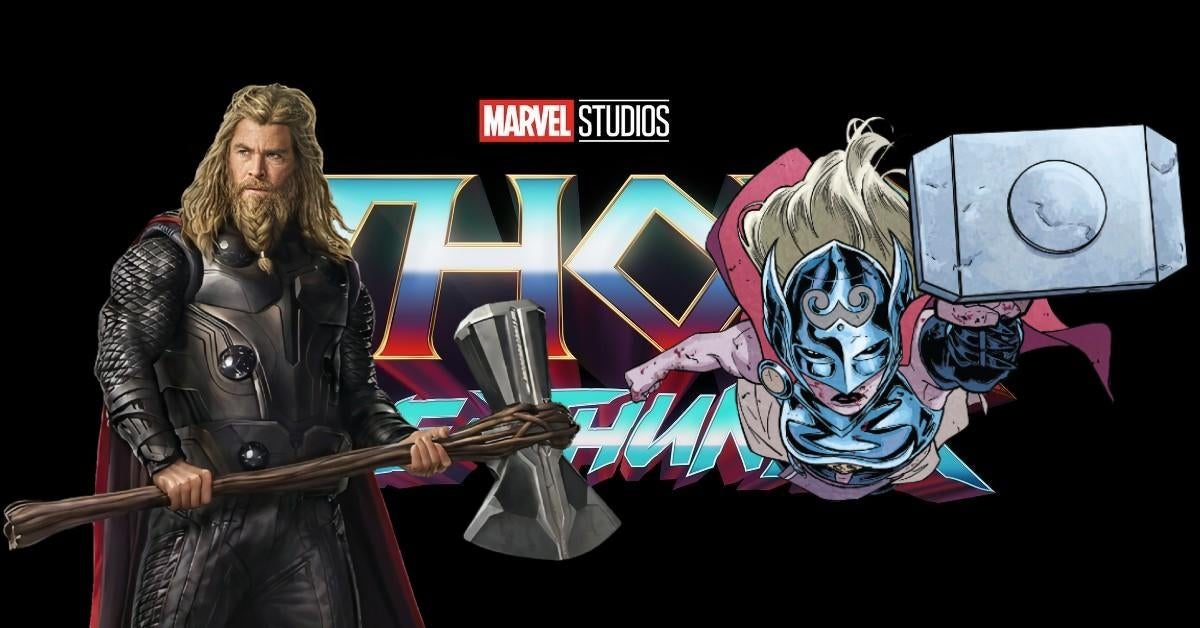 New merchandise for Thor: Love and Thunder offers new looks at Chris Hemsworth and Natalie Portman rushing into battle with their magical hammers. Anticipation for the first Thor: Love and Thunder teaser trailer continues to build, especially after director Taika Waititi, Chris Hemsworth, and Tessa Thompson appeared to tease a trailer release date to kick off the Marvel film’s press tour. We may have another week to wait before the trailer arrives, but we’re now left with movie theater paraphernalia featuring Hemsworth and Portman sharing the mantle of God of Thunder.

A Brazilian Twitter fan page for Chris Hemsworth shared four images of Thor: Love and Thunder popcorn buckets found at a theater. The colorful buckets feature the Love and Thunder logo, along with looks at the characters of the Marvel Studios movie. Natalie Portman’s Jane Foster is shown side-by-side with Chris Hemsworth’s Thor. Each hero has a weapon, with Hemsworth wielding Stormbreaker, and Portman holding a reforged Mjolnir.

Some more takeaways include another side of a popcorn bucket asking its customers to “Raise Your Hammer.” An up-close look at Mjolnir is also provided. It has several cracks in its Uru metal, which makes sense since Hela destroyed it in Thor: Ragnarok. Somehow the reforged Mjolnir will make its return to the Marvel Cinematic Universe and find itself in Jane Foster’s possession. Taika Waititi has stated how the story of Thor: Love and Thunder is inspired by Jason Aaron and Russell Dauterman’s The Mighty Thor comic book, which saw Jane take over as the Goddess of Thunder. The superhero looks from Hemsworth and Portman match many of the leaked images from consumer products that have made their way online.

Chris Hemsworth confirmed on Instagram that the early stages of the Thor: Love and Thunder press tour is kicking off, as he shared a photo of himself with co-star Tessa Thompson and director Taika Waititi. “Some long lead press for Thor: Love and Thunder with these two wonderful humans, “Hemsworth captioned the post of his photo with Waititi and Thompson.” A day full of wackiness and hilarity. Get ready folks this movie’s gonna be wild !! “

“I can not tell you that much. I’m really excited,” Portman previously told Yahoo. “I’m starting to train, to get muscles. If there can be all these female superheroes, the more of them they are, the better it is. I’m trying to think – it’s based on the graphic novel of The Mighty Thor . She’s going through cancer treatment and is a superhero on the side. “

Are you a fan of the Thor: Love and Thunder movie theater popcorn buckets? Let us know your thoughts in the comments!