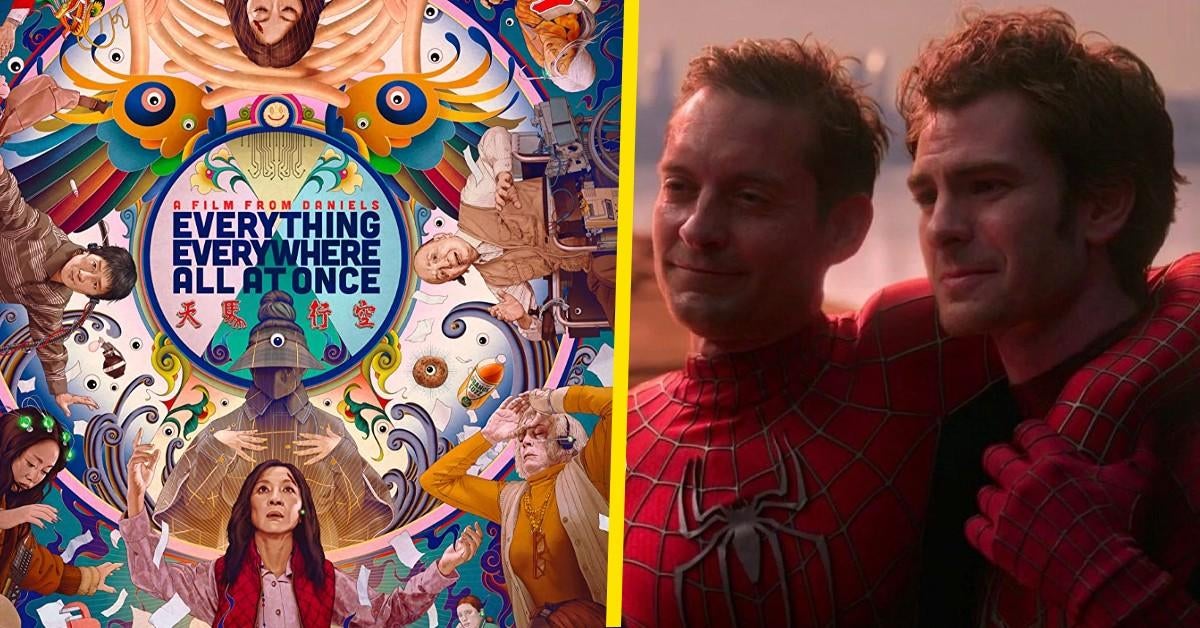 Last year’s journey to Spider-Man: No Way Home was a long one as folks eagerly waited to find out if former Spider-Man stars, Andrew Garfield and Tobey Maguire, were going to make an appearance. There was a lot of lying involved, but when the movie was finally released in December, Garfield and Maguire were able to surprise fans by being a major part of the film. The movie ended up having the second-best opening weekend in history, earned over $ 1.8 billion at the worldwide box office, and became the 3rd movie in history to cross $ 800 million at the domestic box office. The film was just released on DVD, Blu-ray, and 4K this week. Even though the promotional journey for Spider-Man: No Way Home has come to an end, it appears Garfield and Maguire are still hanging out. In fact, they were spotted at a CAA screening of another multiverse-themed movie, Everything Everywhere All At Once.

The screening was introduced by the directors, Daniels, as well as the movie’s supporting star, Jamie Lee Curtis. Many photos of Garfield and Maguire in the audience have been circulating on Twitter. You can check one out below:

Andrew garfield and tobey maguire watching a movie together 🐐 pic.twitter.com/E3K8BCovpU

Everything Everywhere All At Once is becoming one of the highest-rated movies of all time across multiple platforms. Currently, the movie has a 97% critics score and a 93% audience score on Rotten Tomatoes. ComicBook.com‘s Patrick Cavanaugh gave the movie a 5 out of 5 and called it a “triumph.” Everything Everywhere All At Once stars Michelle Yeoh (Star Trek: Discovery), Stephanie Hsu (Shang-Chi and the Legend of the Ten Rings), Ke Huy Quan (The Goonies), James Hong (Blade Runner), Jamie Lee Curtis (Halloween), Jenny Slate (Obvious Child), and Harry Shum Jr. (Crazy Rich Asians). You can read A24’s official synopsis for the movie below:

“Directed by Daniel Kwan and Daniel Scheinert, collectively known as Daniels, the film is a hilarious and big-hearted sci-fi action-adventure about an exhausted Chinese American woman (Michelle Yeoh) who can’t seem to finish her taxes.”

As for Maguire and Garfield, Garfield recently admitted to The Wrap that lying to the press about being in Spider-Man: No Way Home was enjoyable.

“It was stressful, I’m not gonna lie,” Garfield shared. “It was rather stressful but also weirdly enjoyable.” He added, “It was like this massive game of Werewolf that I was playing with journalists and with people guessing, and it was very fun … There were moments where I was like, ‘God, I hate lying.’ “I do not like to lie and I’m not a good liar, but I kept framing it as a game. And I kept imagining myself purely as a fan of that character, which is not hard to do.”

Everything Everywhere All At Once is now playing in theaters, and Spider-Man: No Way Home is available for home purchase.