This article is part of Consequence‘s Marvel Pop Culture Week, examining all the ways in which the MCU invokes our world’s pop culture and creates its own. Here, we dig into just how often Marvel actually does reference other pop culture tropes. (It happens a lot.)

To understand something, first you have to know its full scope. Which is why we did… this. The below represents an attempt to capture all the times, and all the different ways, Marvel films and TV shows have mentioned pre-existing pop culture while telling stories of super-powered heroics.

How we created this list: Consequence intern Aurora Amidon led the way on compiling the references included, utilizing IMDB’s Connections listings for each film and other guides to the MCU. We then curated and edited this list to check that we were identifying the earliest possible references.

For what ended up becoming the most significant type of data involved in this list was dates, which became a fascinating lens into just what kind of pop culture references do and do not make sense within the MCU. The primary example of this, we discovered, was how the Batman and Superman references made in 2019’s Eternals do not actually break continuity, and even make a certain amount of sense given when those characters were created.

Another example: In Guardians of the Galaxy (2014), Peter Quill (Chris Pratt) says, “Ninja Turtle, you better stop poking me!” to one of Korath’s (Djimon Hounsou) henchmen. Dates matter here, because the reference being made here could be one of a few different options: the original Teenage Mutant Ninja Turtlesor the many, many screen versions that have been adapted from creators Kevin Eastman and Peter Laird’s originally self-published black-and-white comics.

In this case, the key is the fact that Peter Quill was abducted from the planet Earth in 1988, two years prior to the release of the blockbuster New Line film… but just after the premiere of the popular kids’ animated series, which debuted December 28, 1987 as a five-part miniseries, before going into proper syndication in October 1988. Actually, that is cutting it a little close, but it’s safer to assume that prior to his abduction eight-year-old Peter happened to catch the hot new cartoon of the year, as opposed to what was then still a relatively underground comic book.

In addition to exploring questions like this, one other fascinating element that came out of making the list was discovering what MCU properties leaned the hardest on referencing external pop culture. As you can see in the chart below (click to expand)… 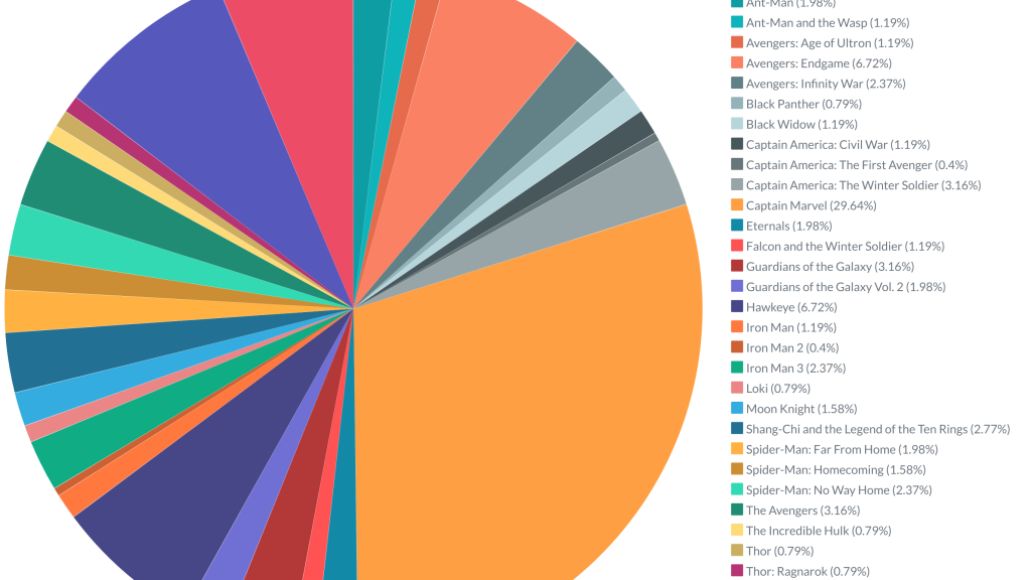 The clear winner was Captain Marveland as you’ll see in the list, there’s one scene that’s the reason for topping the charts: When Carol Danvers (Brie Larson) returns to planet Earth after years in space, she does so by crashing into a period-accurate Blockbuster Video, packed with VHS tapes of films that would conceivably have been available for rent in 1995.

With Doctor Strange In The Multiverse Of Madness only just now out in theaters, we had limited time and ability to parse it fully, and so we’ll save its potential inclusion for future updates. In addition, if you’re wondering, the following shows were not included in this list:

The reason is simple: In trying to create a unified sense of the MCU, we chose to focus on the theatrically-released films plus the Disney + series, as those are the projects overseen by MCU megamind Kevin Feige and thus confirmed as 100% canon. While many of the above shows have clear ties to core Marvel projects, many of them (looking at you, Runaways) have only a vague connection to Marvel continuity, and others (looking at you, Inhumans) we might have good reason to forget about entirely.

Check out the full chronological list below, or visit it in spreadsheet form via this link. There’s sure to be nitpicking that ensues with a project like this – if we missed anything, we’m sure to hear about it on social media – but this represents at least an attempt to tackle the madness (in this one very specific cinematic universe) .