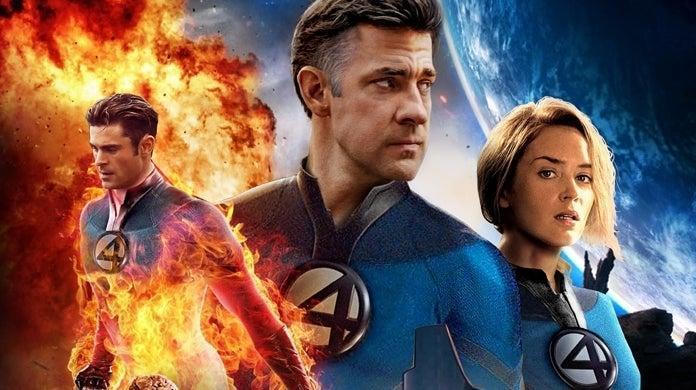 If there are two things that Marvel fans want, it’s for the Fantastic Four to join the MCU and for Reed Richards and Sue Storm to be played by real-life husband and wife John Krasinski and Emily Blunt. Fans got a partial taste of things when Krasinski appeared as the Earth-838 Reed Richards in Doctor Strange in the Multiverse of Madness, but now a Disney + poll is oddly taking the fan casting to an interesting new level. A survey sent out to certain Disney + customers about upcoming MCU projects apparently is using a fan made Fantastic Four poster featuring Krasinski and Blunt.

On social media, CinemaBlend managing editor Sean O’Connell shared a screenshot of a survey that was sent by an outside company about Disney +’s MCU projects. The survey, which was apparently sent out on an “invite only” basis, features an image for Fantastic Four that utilizes Mitch Letcher’s fan-created poster. The full fan-made poster, which you can check out here, also features Zac Effron as Johnny Storm, and Liev Schreiber as Benjamin Grimm.

File this under “Strange.”

An outside survey company polling Disney + patrons regarding upcoming projects used John Krasinski and Emily Blunt for the Fantastic Four. Reed is even shaven, in a tweaked suit, with gray hair at his temples.

Wishful thinking? Or something more? pic.twitter.com/iyBk4X8Quh

One of the comments on O’Connell’s post suggests that the survey uses other fan art for other projects as well, so it feels like it may be a situation of the survey folks just using art they felt worked best, especially since some of the projects they are asking about may not have official art just yet. Even at that, fans are still more excited than ever at even the idea that Krasinski and Blunt could be Reed and Sue, especially now that we’ve gotten to see a version of Krasinski as Reed in action – though a rumor has suggested that Krasinski was not the first choice for the Multiverse of Madness casting. James Bond alum Daniel Craig was reportedly originally set for the role but bowed out as cases of COVID began to rise and the film’s writer Michael Waldron even shared with ComicBook, .com that fan requests did not really come into the conversation for casting the Illuminati, though Krasinski’s name is one that just came up more naturally.

You can check out Krasinski as Reed Richards in Doctor Strange in the Multiverse of Madnesscurrently in theaters.