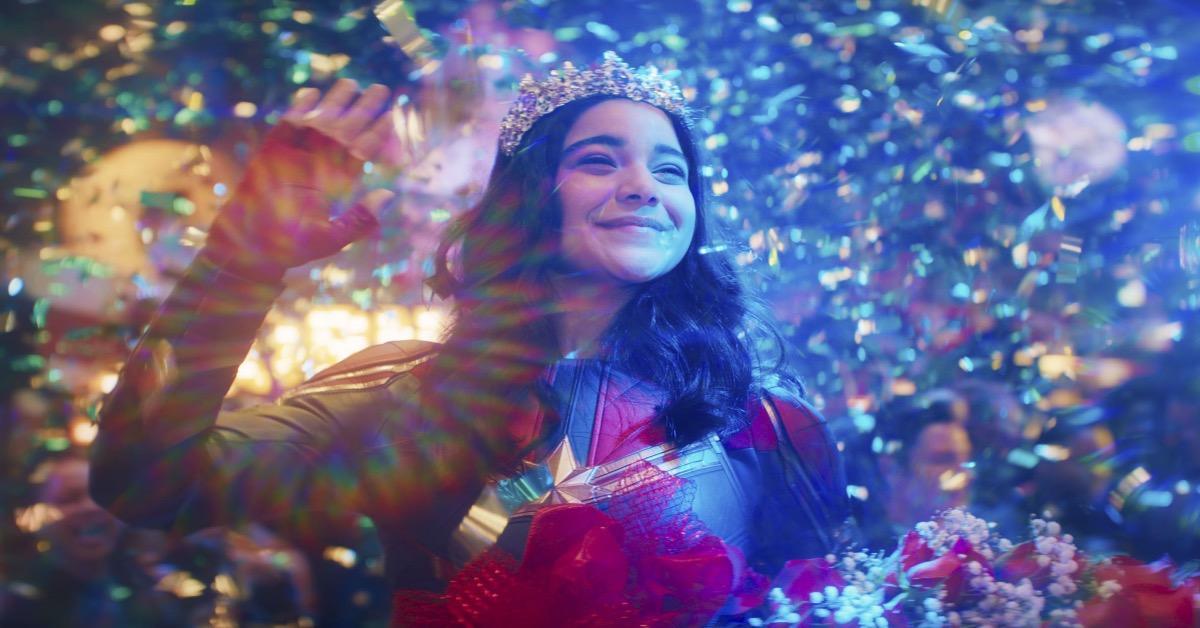 What makes a hero? That’s the question at the heart of Ms. Marvel on Disney +. Our heroine is Kamala Khan, a self-described fangirl who loves the Avengers and has a real talent for YouTube content. However, she’s very much at an age where there’s pressure to have her life all figured out. That’s a lot of stress on a teenager! However, star Iman Vellani absolutely nails the characterization of Ms. Marvel and a warm group of family and friends make this Marvel Cinematic Universe outing absolutely soar.

At home, Kamala is the daughter of Yusuf (Mohan Kapur) and Muneeba (Zenobia Shroff). Her older brother Amir (Saagar Shaikh) is about to get married. The family dynamic is quickly formed in the opening minutes as the teenager is trying to pass her driving test. It’s one of the silliest gags we’ve seen in the MCU in some time. However, it instantly endears you to this girl and her parents.

Kapur brings an instant warmth to Yusuf (and a hilarious moment with body paint) and Muneeba will strike a chord with anyone whose mom tried to protect their children at any cost, though without being overbearing. You might be expecting them to be too harsh, but both parents just want their daughter to be happy. It’s a refreshing choice on the part of producers Adil El Arbi and Bilall Fallah.

Those two were tasked with quite a mission; Kamala Khan is nothing short of a phenomenon among young comics fans. Some sections of the Internet might be gripping, but if you look at the Young Adult readership sales charts, the numbers speak for themselves. When the first images of her powers debuted and longtime fans saw things were going to be different, there was some understandable concern, but Arbi and Fallah have figured out one important thing working with Sana Amanat and the rest of Marvel: What really matters is Kamala Khan. Throughout the episodes available to the press, it is wildly clear that this is a story about Ms. Marvel and that character is here and realized in a very similar fashion to her origins on the page.

All the mysteries have not been fulfilled yet, but there’s no question that Vellani feels like the character come to life. There’s adolescent daydreaming, subtle effects that externalize inner dialogue, and the kind of banter you would expect from High School students. Kamala’s friends are going to be fan favorites, too. Nakia (Yasmeen Fletcher) will serve as a bit of an inspiration for young viewers who have not seen themselves reflected on screen in a property like this. (There is bound to be a Scarlet Scarab-esque moment with Nakia before the end of this series.) Bruno has grown up as part of the family and provides “Man in the chair” duties for Ms. Marvel and also seems to be very protective of his friends. Kamran (Rish Shah) is mysterious, cool, and going to be a hit on the convention circuit.

While the CGI action is there in the doses you would expect from the MCU, what really drives Ms. Marvel is that there are really no characters that you do not want to be around. In all of these characters, you see a little bit of your family or friends, which is a winning formula for both the show and Marvel at large.

A lot of commentators have argued that Phase 4 of the MCU has lacked a singular focus, but Ms. Marvel might tip the studio’s entire hand. With characters like these, all you have to do to get people invested is have them play off of each other. By the end of the Disney + show, the audience will be willing to follow them anywhere.

The Marvels might be just around the corner, but Kamala is going to be a star before that adventure lifts off next year. Ms. Marvel lays a great foundation for the character among casual audiences. Who is she? Well, the Disney + show argues that she’s a hero and a pretty awesome one at that.