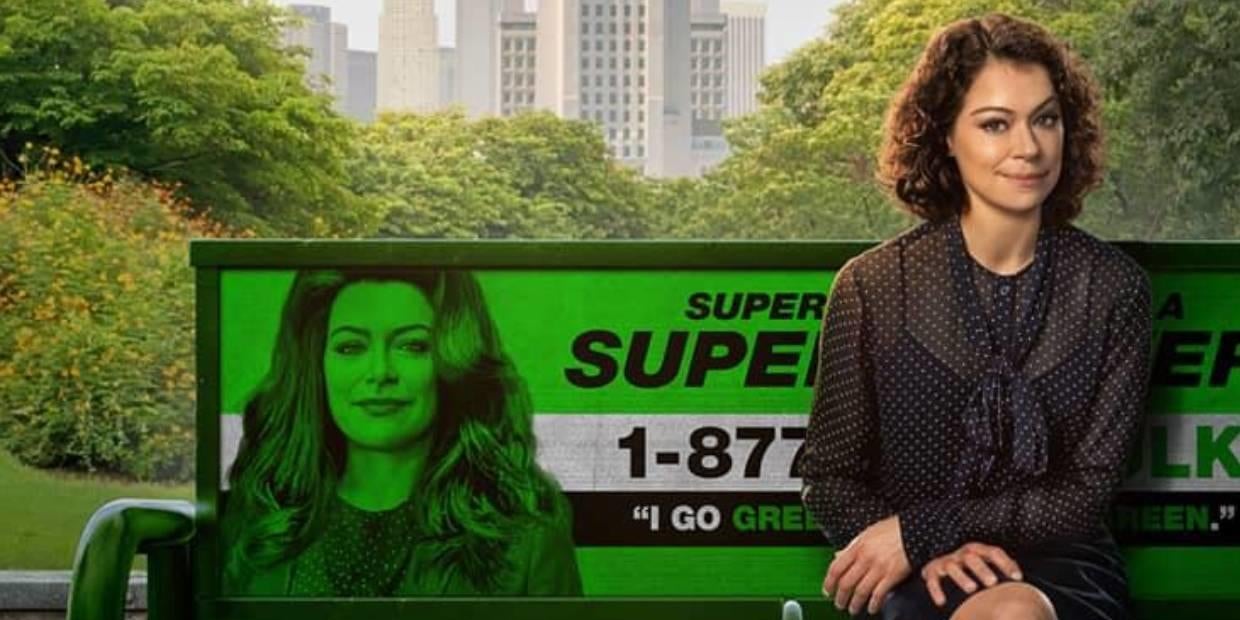 “You feel admiration for this woman, don’t you? You can’t help it, can you?” reads a villain’s monologue in The Sensational She-Hulk #10, as he confronts Jennifer Walters / She-Hulk with a hologram collage of her greatest moments. This line kept ringing in my head as I watched the first four episodes of She-Hulk: Attorney at Law, the live-action Disney+ series that will fully bring Jen’s status quo into the Marvel Cinematic Universe. Since her debut in 1980, She-Hulk has remained a little misunderstood by some superhero audiences, who (intentionally or unintentionally) reduce her to either a genderbent version of the Hulk or a caricature of a muscular and angry woman. As decades of wacky and wonderful comic appearances have proven, there are so many more things to admire about the jade giantess – a fact that her TV debut appears to be embracing wholeheartedly. The first four episodes of She-Hulk: Attorney at Law are endlessly and effortlessly entertaining, with a dynamic sense of identity and a love for Marvel lore that needs to be seen to be believed.

She-Hulk: Attorney at Law centers around Jennifer Walters (Tatiana Maslany), an ambitious lawyer in Los Angeles who just so happens to be the cousin of Bruce Banner / Hulk (Mark Ruffalo). After a freak accident exposes Jen to the gamma radiation in Bruce’s blood, she develops her own set of Hulk powers and is accidentally thrust into the spotlight as a super-strong, fourth-wall-breaking superhero dubbed She-Hulk. As Jen fights for various heroes and villains in court as part of a new superhuman-focused law division, she must grapple with her own role as a reluctant superhero, as well as the usual trials and tribulations of being a woman in her 30s.

Almost from the first frame, what makes She-Hulk stand out from its Disney+ predecessors is its reverential, but refreshing approach to its source material. Sure, Phase 4 of the MCU has already been chock-full of character introductions, but those debuts have either been grounded in one particular comic run (Mrs. Marvel spirit Hawkeyefor example) or cherry-picked disparate elements from across Marvel canon (Moon Knight). Instead, She-Hulk elects to blend together some of the best parts of Jen’s incredibly-distinct solo runs – supporting characters who were previously separated by decades of comic canon get to bump elbows onscreen, and Jen approaches problems with a mix of mid-2000s pragmatism and Sensational She-Hulk-era exuberance. This creates a surreal sense of novelty for fans familiar with She-Hulk comics, as well as an incredible jumping-on point for anyone new to them, as even the smallest Easter egg has a dense (but never overwhelming) sense of lore around it. When you fold in She-Hulk‘s clever use of familiar MCU lore – both the often-forgotten The Incredible Hulkand other nuggets of canon that are way too good to spoil here – the show’s approach feels even more revolutionary, and shows just how much can be possible within the sandbox of superhero adaptations.

On its own, She-Hulk‘s “kitchen sink” take on canon would be a breath of fresh air, but that feeling only grows when coupled with the series’ absurd, but authentic tone. The series utilizes the conventions of TV comedies to great effect, with a mix of “case of the week” episodic storylines and larger serialized mysteries that the MCU hasn’t quite seen since WandaVision. This familiar format creates a launchpad for the show to be undeniably comedic and silly, with one-liners, visual gags, and post-credits scenes that will leave many viewers doing a double take. But at the same time, almost no joke “punches down”, and the few that do are able to revel in a sense of absurdity. This is particularly reflected throughout the early episodes’ courtroom scenes, which have the right amount of verisimilitude while dealing with the legal proceedings of literal gods and monsters. It’s also reflected expertly in Jen’s iconic fourth-wall breaking, which escalates in some clever ways as the show goes along. A sense of earnestness remains at the beating heart of the show, particularly with regards to how it tackles feminist issues, with a few honest, compelling, and almost cathartic moments that feel unprecedented in a franchise as massive as the MCU. This tone is not only the perfect encapsulation of Jen’s energy in the comics, but it’s something that never ceases to be endlessly entertaining when brought to life onscreen.

Unsurprisingly (especially for those familiar with her Emmy-winning work on Orphan Black) Maslany’s performance as Jen takes the already-great foundation of She-Hulk and rockets it into a whole other stratosphere. From the jump, her approach to Jen effortlessly turns her comic precedent into a dynamic onscreen personality, one that seamlessly feels like it’s been a key piece of the MCU since before the franchise had “Phases”. Both profoundly capable and profoundly dorky, a vast majority of audiences will be endeared to her immediately, if not by the time she acclimates to her new normal as She-Hulk. An endless amount of fun comes from seeing the relationships in Jen’s life – her rapport with Ruffalo’s Bruce is infectious, and breathes new life into his now-decade-long tenure in the franchise. Those in her immediate orbit get to consistently shine as well, both as individuals and as key pieces of Jen’s increasingly-weird life. This includes, but is not limited to, Jen’s bubbly paralegal best friend Nikki Ramos (Ginger Gonzaga, cementing her newly-created character as a joyous staple of She-Hulk lore), her coworker Augustus “Pug” Pugliese (Josh Segarra, delivering a heartfelt “straight man” performance full of surprises), and her superpowered rival Titania (Jameela Jamil, already stealing the scene in a few brief moments of these early episodes). There truly is not a weak link in the cast across the first four episodes – something that is almost to be expected in the MCU, but still comes as a surprise in the context of a half-hour comedy.

On a technical level, She-Hulk will undeniably court a lot of conversation, as evident by the months of existing discourse surrounding the CGI in existing trailers. While the first four episodes are dotted with occasional moments of imperfect CGI, they’re vastly outweighed by immersive moments, which make it easy to appreciate the undeniable amount of craft that went into bringing Jen’s She-Hulk form to life. It also helps that every other technical element keeps the fun going at full speed, from Kat Coiro’s excellent directing across the first four episodes, to Amie Doherty’s genre-bending and energetic score. At the end of the day, the show has a similar sort of technical language to many She-Hulk comics – a viewer can clearly place it within the larger Marvel universe, but it’s able to be its own distinct and impressive thing along the way.

She-Hulk: Attorney at Law is not only the live-action debut that its titular character has always deserved, but it’s a new turning point for what the MCU’s TV shows are capable of. Anchored by Maslany’s mesmerizing and masterful performance, the series is unafraid to be genuinely authentic, gleefully weird, and downright clever in a way that’s electrifying to watch. While there’s no telling what the remaining five episodes have in store, much less where Jen Walters could pop up next in the MCU, She-Hulk: Attorney at Law is about leaving its mark on the superhero landscape.

She-Hulk is expected to debut on Disney+ on Thursday, August 18th. If you haven’t checked out Disney+ yet and you want to give it a go, you can do that here.