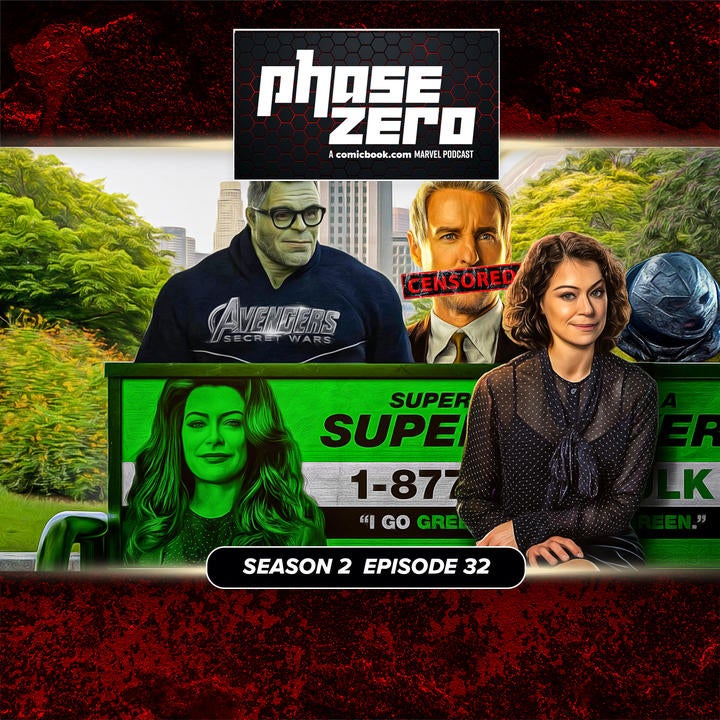 To coincide with the releases of new She-Hulk: Attorney at Law episodes, ComicBook.com’s MCU podcast Phase Zero has moved to Thursdays where it will record at 1pm ET. The show is recorded live on the Phase Zero YouTube channel before being made available in podcast form on all major podcast platforms. In this week’s episode, the 32nd episode of Phase Zero’s second season, the crew took a dive into the first episode of She-Hulk and some big Marvel news and rumors which dropped over the course of the past week. It was one of the funnier, more giggly episodes of Phase Zero, that’s too sour.

The Marvel Cinematic Universe saw She-Hulk and its cast members making a lot of headlines this week, with lots of talk of Avengers: Secret Wars and whether or not Daredevil is canon driving a huge portion of the conversation. However, a tiny hint of an update in regards to Armor Wars, concept art for Thor: Love and Thunder, and more rounded out the week as the D23 Expo approaches and more news is just beyond the horizon.

Phase Zero Episode 2×32 is available now on all major podcast platforms. It is also available in video form on the ComicBook.com Twitch channel and the official Phase Zero YouTube channel. Phase Zero‘s new YouTube channel recently surpassed 1,200,000 views as the podcast saw an uptick in downloads with the bonus episode from San Diego Comic-Con. Links can be found below!

The Phase Zero podcast capped off an exciting freshman year in 2021. In its first episode, the Phase Zero show revealed its mission to be creating a fun and positive community of Marvel fans, getting fans an opportunity to interact with members of the Marvel Studios family, and providing exclusive insights from hosts and celebrity guests. All of those boxes have been checked and more, with more than 1.2 million listeners across all platforms in 2021!

Throughout 2022, Phase Zero has continued to innovate its content and provide a fun, welcoming environment for all fans. Exclusive interviews with Moon Knight executive producer Grant Curtis, Marvel Studios prop master Russell Bobbitt, Doctor Strange in the Multiverse of Madness costume designer Graham Churchyard, and Venom director Ruben Fleischer have been featured in Season 2, along with a trivia episode, a dive into plot holes, and anticipation rankings!

Phase Zero invites you to celebrate all things Marvel, hosting a weekly conversation of theories, speculation, and exclusive interviews and insights. It’s the number one spot for MCU fans, welcoming those new to it all and those who think they know it all! New episodes are recorded live on twitch.tv/comicbook every Wednesday at 12pm ET before being made available on Apple Podcasts, Spotify, Stitcher, iHeartRadio, and wherever podcasts can be found. For updates regarding the Phase Zero podcast, follow the official Phase Zero account on Twitter!