COVER: Big question….do THEY know it’s 40 years? Some very meta tongue in cheek teasing of the actual time here, which is also dotted throughout the issue. I have to say the cover did give me shivers seeing Cosmar and Sunspot having such prominence and they definitely drew all the attention. Stunning ensemble cast by Rafael De Latorre & David Curiel showing new New and old New Mutants. Great composition and staging, laying the groundwork perfectly for what we had in store. What follows is some classic nostalgia and Vita Ayala dives right in, going for it with gusto.
FRAME STORY: The set up of an annual New Mutant get together was the ideal springboard for this nostalgic gathering of composite tales. And I liked all of the character traits on show here. Like Shatterstar discussing ‘formal’ wear, Sunspot being a perfectionist and the misunderstanding of his terminology on the invites (everyone thought the same Bobby…maybe it’s you that got it wrong). Alex Lins styling of Bobby’s hair was…a bold move, but I think by the end of the set piece it grew on me. Are we sure it was his Gala party Karma is talking about here…or was it his hair? I’m skeptical.

DANI MOONSTAR: And as Bryan Valenza colors the Frame story and this one it eases us effortlessly into this nostalgically innocent piece with art from Justin Mason giving the old school feel and bringing the classic Xavier’s School vibe. This story really brought the OG team back to their roots. It was so touching to see the way Berto (at this point the spoiled rich boy) considered the consequences of his actions and the repercussion on others. Even to the end when she declares him a softie and he rebukes her in fear of damaging his image, something he’s always been prone to do. As well as creating a solid bond between himself and Dani, it was a great way of showcasing her heritage in the belt and it’s reason for being on show as part of her uniform. The added bonus of throwing Kitty in there to help associate heritage was perfect as she was the closest in age and able to empathize more with her plight than most of the original X-Men. All that was missing was a night with popcorn and Magnum PI. A truly solid story, grounding the original team and adding to the mythos of the origins. And a little Demon Bear foreshadowing. 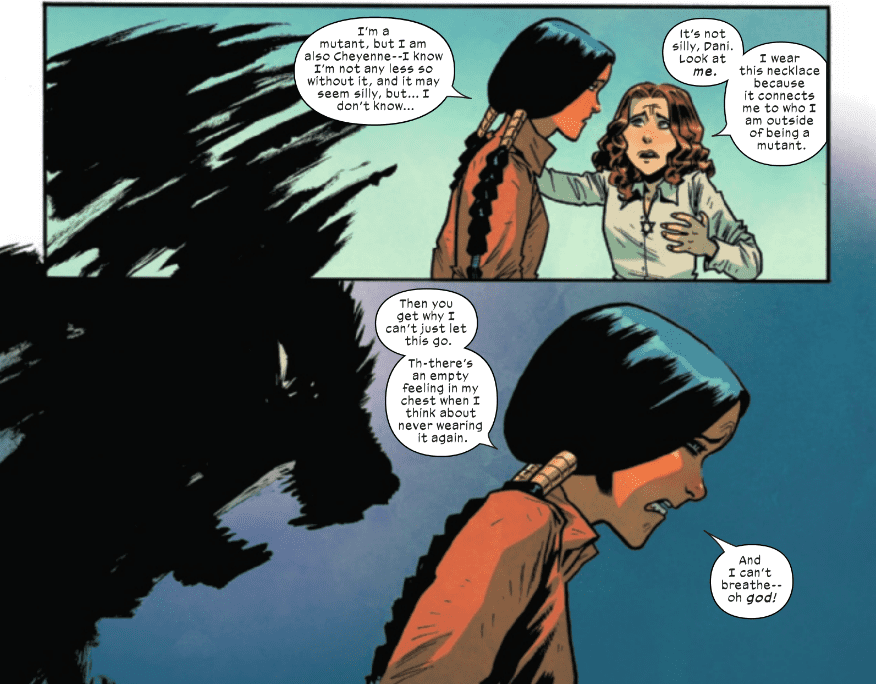 KARMA: Jason Loo takes over on art here, with both pencils, ink and coloring and gives a vibrant feel to a story we never thought we’d see, but have all needed for so long. We have all been waiting years for this one. A brilliant bridge to X-Force #75, with Shatterstar being the inspiration for her pink hair and finally coming out….and brave considering at this point he and Rictor were meant to be on a side mission and never knew her. Whatever, I think it’s genius that this link has been created and secures him as an important part of her growth and the origins of her change, which initially came out of the ‘blue’ way back when and was never really properly explored. 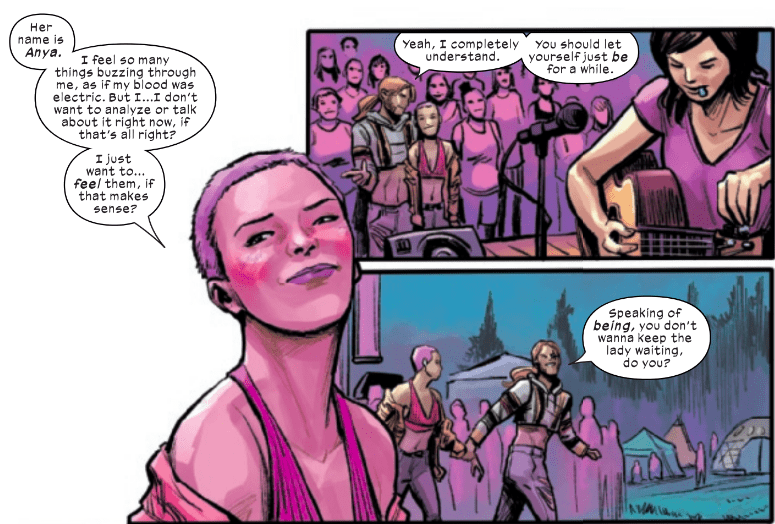 WOLFSBANE: Emma Kubert spirit Roberto Poggi work together to visually capture a great energy of Warlock in this tale and I liked his depiction and childlike innocence here. Spirit Antonio Fabela gives the colors the full on brightness they deserve for a trip to the mall. Storywise a rare connection between Rahne and Warlock and I loved the emoji-speak (Travis Lanham‘s got a hand in here I’m assuming). Similarly to the previous story there is an important cementing of friendship here, although this one is more well established. And a time honored tradition created, not just with the annual gift giving between the two, but also the anniversary party itself. And the touching moment where Warlock thinks he doesn’t belong and they drag him right back in. 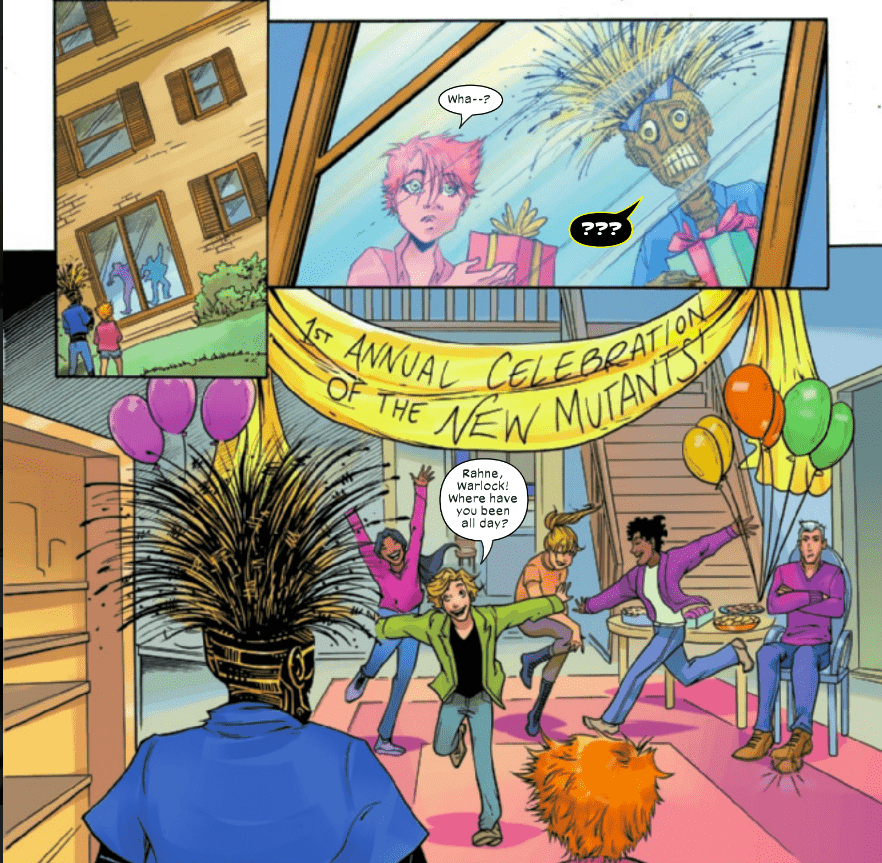 DEADPOOL: Ah the post credit scene- Deadpool showing up HAD to happen I suppose… But who can complain as Alyssa Wong had some fun with the kids and a bit of beachside fun in the sun. Cerebella and Cosmar are back AT LAST, so I am happy with this one!!! I also had to chuckle at Gabby being so over the moon with her gift…while Dani was having none of it. Geo Shaw spirit Nolan Woodard packed a mighty punch with the confrontation between Illyana and Deadpool, as if there was any doubt on the outcome of that face off. And we also get some leads into events in his own book.

And overall..Wait….no Magma???? I mean for the most part she was there before Warlock, who had a sizeable chunk of the story devoted to him. And for that matter no Boom-Boom? But then we would get into other missing X-Terminators such as Skids and so could be here all day…sigh poor Rusty. And I did get to thinking the intro letter should have been post script, as it pre-loaded the perception and its like explaining the joke before you’ve even told it maybe? However, it was touching in the sentiment and overture. Especially as Vita also wore their heart on their sleeve in their final goodbye to the book and the readers. As well as so many other musings of past talent from the book that has given us one of the most quintessentially fully functioning dysfunctional family in the last forty years, to the utmost.