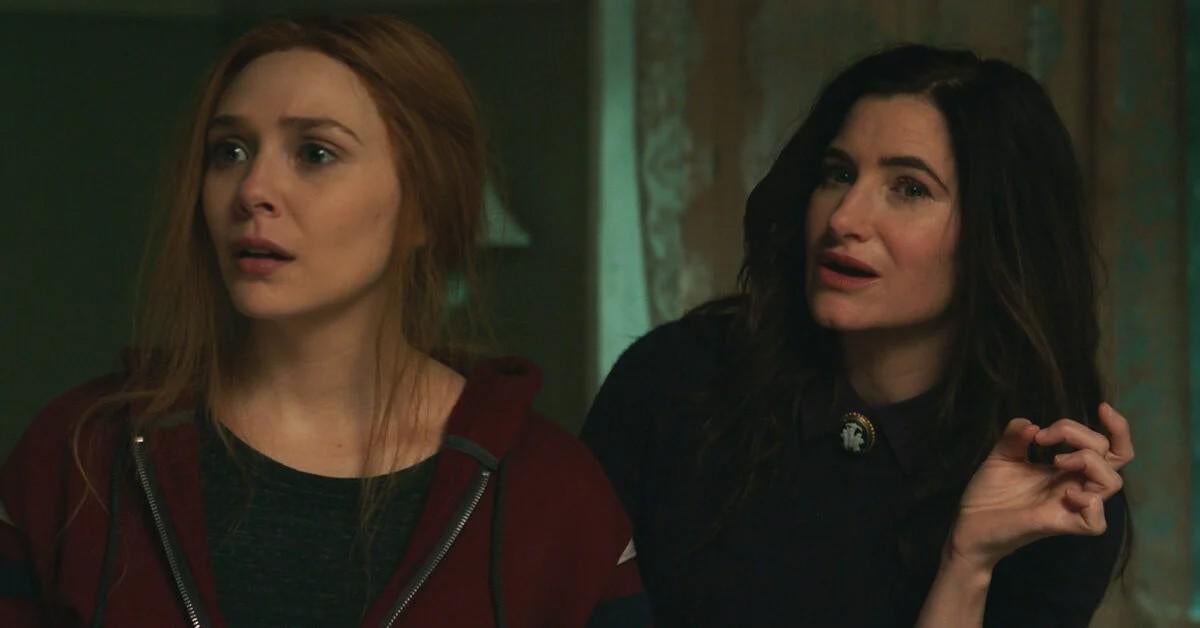 last night, Variety hosted their Power of Women event, which featured Marvel star, Elizabeth Olsen, as an honoree. Olsen was introduced by her WandaVision co-star, Kathryn Hahn, who had nothing but kind words for Olsen. Many people are hoping Hahn and Olsen will reunite again in the Marvel Cinematic Universe, but for now, fans were just thrilled to see them together at the event. Many people have taken to Twitter to share photos and gush about the heartfelt reunion.

“She was my intro into this Marvel family, and she very generously walked me through blasts and wires and stunts and finding truth on an X on a green screen – I was used to talking to other people,” Hahn joked during her speech. “She was so patient with all of my questions. Who is Ultron? What is that glove with all the gems on it?”

Hahn added, “When it was just the two of us working on the finale, our base camp had two cars. It was my dirty minivan and her dirty Prius, and she was like, ‘This is not The Avengers,’ which I think really delighted her. She was very patient as it took me like a solid 40 minutes to ’10-1′ … which in the movie business, is to urinate. I had a lot of costume on, and a very small bladder.”

Hahn continued, “I was blown away by the way this woman was able to self regulate with such focus and clarity and connectedness to herself for months and months and months. Anchored in composure every day under such pressure. I never saw it slip.. A friend recently told me this acronym called PAUSE: Postpone Action Unless Serenity Emerges. And Lizzie is the embodiment of that. She will not press send. She will not rush to judge. She weighs and holds both sides. She doesn’t talk shit . She listens. She just holds steady in her own space.”

You can check out some of the tweets reacting to Olsen and Hahn’s reunion below:

Just Look At Them

They Make Us So Happy

the boost of serotonin i get every time kathryn hahn and elizabeth olsen reunite. the hand holding? pic.twitter.com/SSNI9GAmr4

THE AIR GOT CLEANER, THE ICE CAPS FROZE OVER, THE HOLE IN THE OZONE LAYER CLOSED UP ALL THANKS TO ELIZABETH OLSEN AND KATHRYN HAHN REUNITING. SAYY THAANNKKK YOUUUUU pic.twitter.com/4ILmBJFvvx

Elizabeth Olsen on working alongside Kathryn Hahn
“We just got to do it again!” pic.twitter.com/S0oEA4LhUI

Find someone who hugs you the way Kathryn Hahn hugs Elizabeth Olsen. pic.twitter.com/PewW8vUcEQ

I did not mentally prepare myself for this new Elizabeth Olsen and Kathryn Hahn content. ? pic.twitter.com/1DU5qGWuci

kathryn hahn really said “i know our audience” so she decided to kiss elizabeth olsen’s neck and hoped we went wild. we did.pic.twitter.com/UY1U5oQU5J

No Choice But To Stan

Kathryn Hahn is making it her life’s work to ramble about how amazing Elizabeth Olsen is pic.twitter.com/vIrisAsoNd

Can we get Elizabeth Olsen and Kathryn Hahn on a podcast just to have them talk about how much they love each other for 2+ hours please??