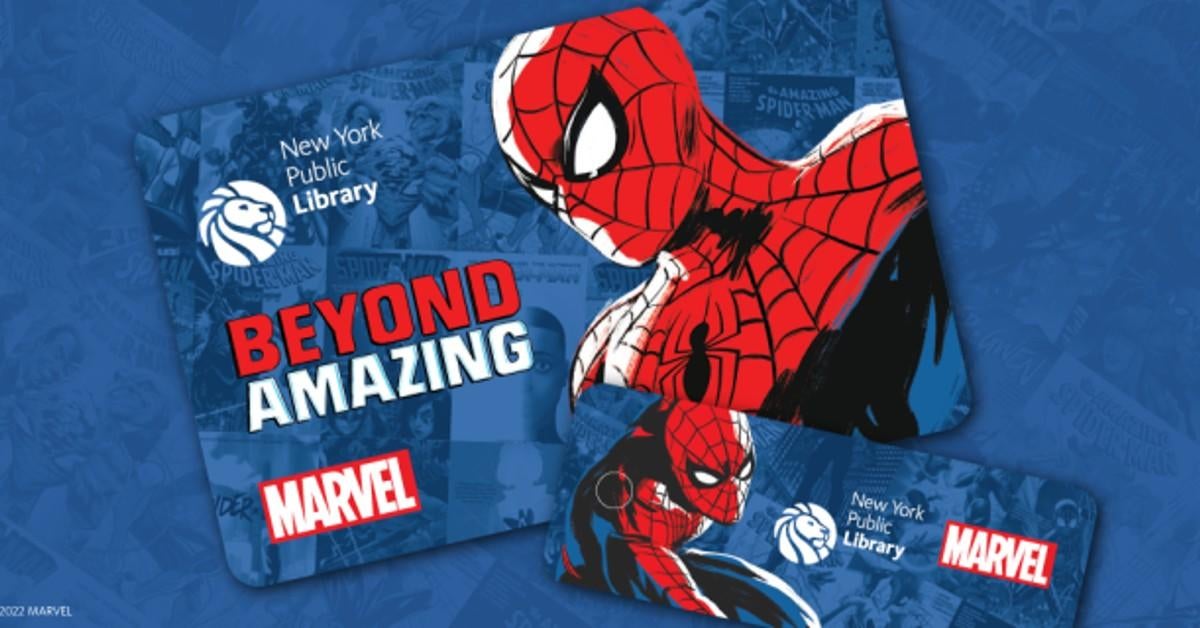 Spider-Man is getting his very own library card in celebration of his 60th anniversary. Spidey made his first comic book appearance in Amazing Fantasy #15, and has gone on to become arguably the most popular character in the Marvel Universe. The publisher has big plans to celebrate the big 60 anniversary, including a celebration at D23 Expo and a “Beyond Amazing” global campaign held at San Diego Comic-Con. The good times will continue to swing by before the year is up, with Marvel Entertainment and The New York Public Library (NYPL) announcing a special, limited-edition Spider-Man library card.

The announcement of a Spider-Man library card will be released on October 11th and comes just in time for this week’s New York Comic Con. The card “emphasizes the importance of reading, knowledge, and libraries to Peter Parker’s crime-fighting comic book adventures.” Along with images of Spider-Man, other heroes like Miles Morales and Gwen Stacy will also be featured on the library card and upcoming banners outside the Stephen A. Schwarzman Building and the windows of the Stavros Niarchos Foundation Library (SNFL).

The hope is that these special-edition Spider-Man library cards will encourage customers of all ages to continue reading, as well as showcase the power of books, comics, and libraries. Details about the card and related activities are available online: nypl.org/beyondamazing

“Reading is a superpower—one that provides everyone with the ability to learn, to be inspired, and understand the world more fully,” said New York Public Library President Anthony W. Marx. “At The New York Public Library we remain dedicated to providing books and resources that help New Yorkers reach new heights and working with Marvel on this exciting, limited-edition Spider-Man card reinforces the exceptional accomplishments people can achieve when they have access to information . It also states unequivocally that we think our patrons are ‘beyond amazing.'”

“Marvel’s history has always been rooted in telling stories on the page. And to many people, those stories taught them the joy and power of reading, whether it was their first comic book or graphic novel at a young age or the first time they shared their passion for Marvel comics with their friends and families,” said Marvel Vice President of Licensed Publishing Sven Larsen. “With so many of our most iconic moments and characters established in New York City, we’re thrilled to work with The New York Public Library to invite even more people to dive into Marvel and find their own favorites across Spider-Man’s legacy.”

Other high-profile library cards have also been issued, such as for the children’s book The Snowy Day and the Library’s “Knowledge Is Power” card. The release of the Spider-Man card also marks the one-year anniversary of the Library’s decision to eliminate fines as a way to remove barriers to accessing the Library for all New Yorkers. This historic move was even a plot point in Amazing Spider-Man #900released on July 27. In a special story written by Daniel Kibblesmith, drawn by David Lopez, and colored by Nathan Fairbairn, Peter Parker returns a large stack of overdue books to the Library after learning of the elimination of late fines.

The New York Public Library’s Open House week begins October 11th, the same day the Spider-Man card is available. It will be available to new and current patrons free on a first-come, first-served basis at all NYPL branches, located throughout the Bronx, Manhattan, and Staten Island. Libraries will be hosting a variety of programs and events throughout the week, as well as featuring book displays and reading recommendations from a special reading list curated by NYPL staff.